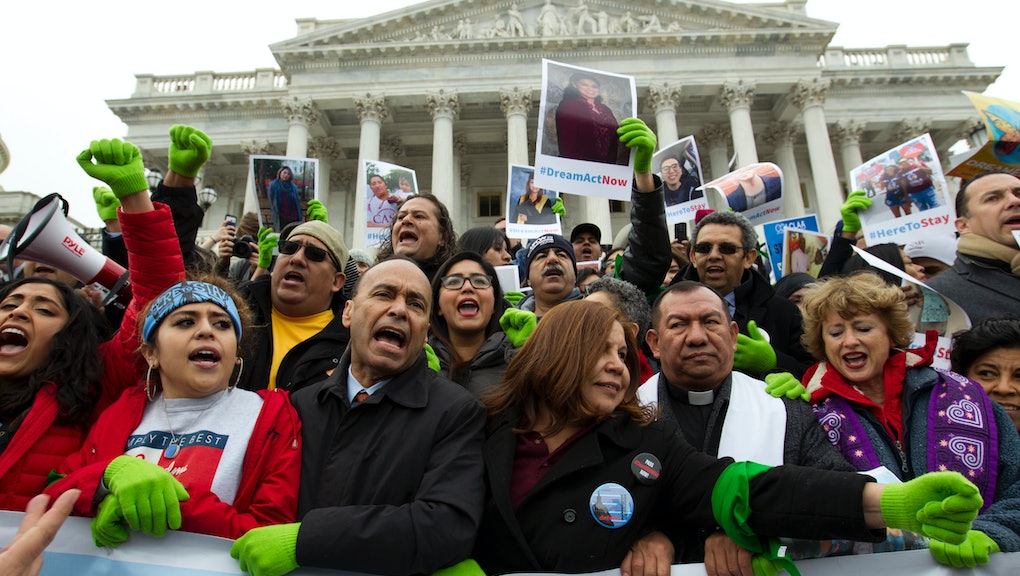 “They folded immediately”: Progressives fume at Dems over deal to reopen government

Washington — Leading progressive, immigrant and civil rights groups were fuming on Monday following a vote by a majority of senators to reopen the government after a nearly three-day shutdown.

Sen. Chuck Schumer (D-N.Y.), the Senate minority leader, took particular fire from his left flank for pushing a majority of his party to join Republicans in funding the government until Feb. 8. Some indicated Democrats were naive in trusting Republican Senate Majority Leader Mitch McConnell (R-Ky.), who agreed to bring an immigration bill that codifies the Deferred Action for Childhood Arrivals program into law to a vote on the condition that the government remains open.

Murshed Zaheed, political director and vice president of CREDO Mobile, a progressive phone company that says it has five million members, said it should be questioned whether Schumer can remain as the Democratic leader after Monday’s deal.

“This is par for the course for Chuck Schumer, who has a history of selling out the progressive base of the Democratic party,” Zaheed said. He felt that Monday’s vote was a betrayal akin to when Democrats voted to support the Iraq war in 2002. “You have to be dumb, delusional or a craven liar to think McConnell’s words mean something,” he said.

At issue is the fate of nearly 800,000 DACA recipients who entered the U.S. as children without going through proper immigration channels. In September, President Donald Trump announced he’s ending DACA, a program that let those immigrants live and work in the U.S. legally. The program expires March 5, at which point mass deportations of DACA recipients may begin.

McConnell promised Democrats that if the Senate cannot reach a broader immigration deal by Feb. 8, he will introduce legislation that protects DACA recipients from deportation — as long as the government remains open. The deal senators agreed to on Monday funds the government until Feb. 8.

Progressives told Mic on Monday that Democrats lost leverage by forcing a shutdown on Friday night, then caving in less than three days later. Monday is the fourth time since September that Democrats have not stood their ground on demanding protections for DACA recipients, leading activists to argue the party is in an even weaker negotiating position.

“Mitch McConnell called their bluff, and they folded immediately,” said Ezra Levin, co-founder of Indivisible, a progressive organizing network with 6,000 groups nationwide. “The big blue wave that Schumer hopes will make him [Senate] majority leader will not build itself. ... This is going to demoralize the base.”

“They are interested in keeping [DACA recipients] as a talking point, but they aren’t particularly interested in fighting the fight to get the Dream Act done,” he added, referring to the legislative proposal to codify children brought the U.S. by undocumented immigrant parents.

Levin said that he believes because Schumer agreed with McConnell’s terms to only consider DACA protections if the government remains open after Feb. 8, he has already forfeited the next bargaining chip.

Progressive opponents of Monday’s vote also say there is little evidence House Republicans, or Trump, will agree to any bipartisan deal produced by the Senate.

“A promise from known liars Mitch McConnell, Paul Ryan, or Donald Trump isn’t worth the paper it’s printed on, yet despite that fact, most Senate Democrats, including Democratic Leader Chuck Schumer, voted to allow Donald Trump to continue to subject an ever growing number of [DACA recipients] to lives threatened by deportation,” said Charles Chamberlain, executive director of Democracy for America, in an email.

“If you want to know why we lost in 2016 and why a Democratic wave in 2018 is far from guaranteed ... look no further than this weak and profoundly disappointing cave from Senate Democrats,” he added.

Such harsh criticism was not limited to the most traditionally vocal progressive groups. The American Civil Liberties Union, which recently announced it plans to play a key role in the 2018 midterm elections, said Republicans and Democrats “betrayed our American values and allowed bigotry and fear to prevail.”

Marielena Hincapié, executive director of the National Immigration Law Center, said in an email: “Those who voted [to reopen the government] based on the promise of a future immigration vote put their faith in the hands of those who have proven themselves unreliable in the past.”

And United We Dream, the organization leading activism for passage of the Dream Act, blasted the vote.

“Many Democrats refused to take a stand and only did so after immigrant youth and allies held sit-ins and got arrested at their offices,” said Cristina Jiménez, co-founder and executive director of United We Dream, in an email. “I heard Sen. Tim Kaine (D-Va.) brag about resisting Trump’s agenda at the Women’s March this weekend, only to see him vote to enable it two days later.

“Senators who voted today for the promise of a symbolic vote on the Dream Act are not resisting Trump — they are enablers,” she added.

In an interview Monday afternoon, MoveOn.org Washington Director Ben Wikler said he was “furious” and “astonished” by the Democratic move.

“The tempertature went up one degree and a lot of Democrats ran screaming from the kitchen,” said Wikler, whose organization pioneered online progressive organizing.

“This is a setback. This is a blow. This is not a defeat. The fight is still absolutely live. This is too important to be left to the politicians. At this point, the public needs to make itself unignoreable.”