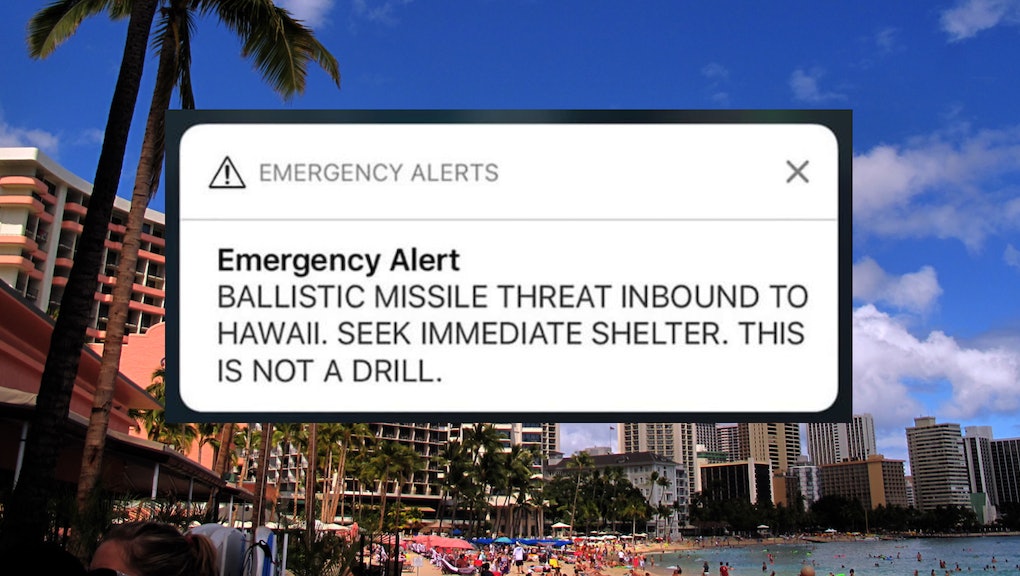 Nuclear missile aftermath: How people in Hawaii reacted when they thought they had 15 minutes left

What would you do if you were told a missile was headed for you and you might only have 15 minutes to live? A missile threat text earlier this month may have been a mistake, but for those 38 minutes before it was retracted, the threat was real for many people.

Here’s how some locals and visitors in the Hawaiian islands reacted to the false alert on the morning of Saturday, Jan. 13.

Some didn’t believe it

“My first thought was ‘This can’t be happening,’” Anita Hodges, a retired University of Hawaii professor wrote on her Facebook page. “Our house overlooks Pearl Harbor and the international airport [in Honolulu]. There was no movement of an aircraft carrier or military planes that would activate immediately if the threat was real.”

But Hodges’ initial confidence was mixed with concern. Beyond receiving a text that read: “THIS IS NOT A DRILL,” some heard sirens and saw a banner warning stream across the television.

Danielle Endres, a 29-year-old registered nurse and nanny from Syracuse, New York, was visiting Hanalei Bay while nannying for a family. “After receiving the alert, I was immediately in disbelief,” she said over email. “I went downstairs to join the family. They were searching the TV for information, but at this point, there was nothing new being broadcast.” Endres said she experienced a rush of patriotism that helped her keep the faith that the threat wasn’t real and she’d be OK.

Some looked to the sky — and online — for a sign

TV stations and social media seemed to be of no help. “My brother-in-law was trying to find news on Twitter. I tried finding a TV station with news,” 37-year-old photographer and videographer Jonas Maon said in an email. But his initial search turned up nothing.

Many residents said they didn’t know what they were even looking for. “I think I was in shock because I was super calm and kept looking out the front window of our townhouse, looking for something to fly across the sky,” Pearl City resident Sarah Goggins said in an email.

Some said their goodbyes or raced to be with their families

Tess Cochran, a registered nurse from Kaneohe, was at the gym when she learned of the alert. “Without thinking, I left the gym and so did everyone else,” she wrote in an email. “I called my 14-year-old daughter [who was at home], spoke to her and then made a call to her 18-year-old sister who was at the state capital.”

“One-and-a-half million people were terrified, and many thought this was the end of their lives,” Hodges said. “People were driving 100 mph on the highways trying to get home to be with family.”

Maon and his wife immediately grabbed the essentials — the dog, a leash, a laptop and contact lens supplies — and rushed out the door to his parents’ house next door. “I knew that if something was going down I wanted to be sure we were with family,” he said.

Danielle Endres said things were fairly calm until one of the family members visiting Hawaii called another back at home to give them the code to their safe — where their will is stored. “From that moment,” she said, “that’s when the rest of the family went into full panic mode.”

Goggins remembers a clear moment when her husband was on the phone with his father. “We tried to get in touch with family members,” she said. “The thing that sticks in my mind was seeing [her husband] get emotional after talking to his dad. That’s when it hit me that this may be real.”

Some prepared and sought shelter

Goggins and her husband huddled in the pantry, away from windows.

One couple from Honolulu said they waited in their hallway, the only windowless space in their two-bedroom apartment — barely big enough for them both to fit.

Kelli Mills, a 27-year-old configuration architect from Kaimuki, said she didn’t know whether to find shelter in her bathtub or fill it with water just in case. She eventually chose the latter. “I filled up extra water [bottles] and started running water in the bathtub. The only thing I could think to do was close all windows and barricade my bedroom window with my closet door,” she said on Facebook. “I didn’t call anyone. I didn’t cry. I just stayed in my windowless bathroom, waiting.”

Some accepted their fate, realizing they had no shelter or supplies

“We [had] no shelter to go to,” David Mulkey, a retired Maui resident, said in an email. “I called my kids and prepared to kiss my ass goodbye.”

Many residents expressed feeling like the possibility for survival was hopeless.

“We’re in a single-wall construction home,” the couple in Honolulu explained. “If the blast did reach us, it would destroy our home. The only hope we could have [was] for it to be over quickly.”

Chef Adam Tabura of Ewa Beach noted some people on the island — including his mother — were in Hawaii when Pearl Harbor was hit. “We’re on an island; there’s no place to run. There’s really nothing we can do,” he said over the phone.

“You just have to have faith,” Tabura said. “Pray and hope for the best.”

Goggins said that because they live in Pearl City, her husband felt they should get in the car and drive north, far away from the military bases. “But at that point, the only thing I felt would calm us down would be to get on our knees and pray,” she said. “So that’s what we did.”

Some kept calm and carried on

Fidel Hart of Honolulu said he’d just returned from watching a Waikiki Beach sunrise when he got the notification on his phone. He said he considered calling his sister in Ohio, but decided not to worry her. “I turned to the local TV channels, but they were all showing live basketball games. That seemed weird to me, yet kept me calm because I knew if the alert was real, all networks would have surely broken into live emergency coverage,” he said over email.

TV personality Lanai Tabura said he immediately went outside in search of sirens. “I didn’t hear anything and didn’t see any neighbors outside, so I assumed it was a false alarm and went back to my bed,” he said over the phone.

The ballistic missile threat did not stop one bride and groom from getting hitched. “I had a wedding to attend later that day,” Maon said. “The wedding party was preparing for the wedding when the alert came through their phones. They all ignored it and continued on with their plans.”

“It really put a lot of things in perspective for me. What was the last thing I did this morning? I was glad I wasn’t yelling at my kids and had given them both hugs,” Cochran said.

“The feelings experienced for those 38 minutes were different for every person,” Endres observed. “I truly have never felt so incredibly helpless and so small in my entire life than I did that morning.”