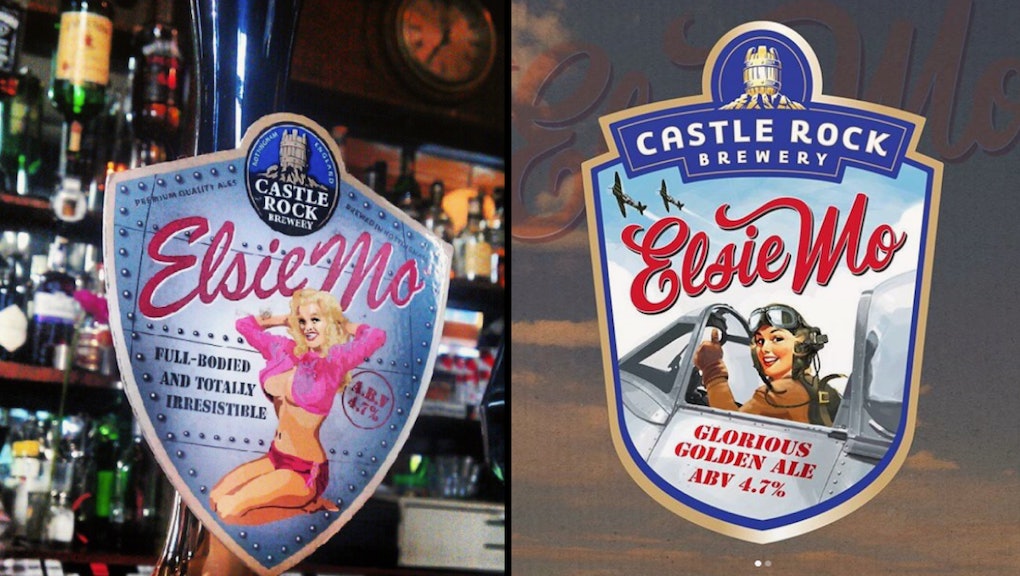 The beer industry doesn’t have a reputation of being friendly to women, despite the fact that original beer brewers were female. Among craft breweries, many bottles feature casually sexist label designs and beer names — take, for example, Clown Shoes Beer’s “Tramp Stamp Belgian IPA” or Flying Dog Brewery’s “Raging Bitch IPA.” After consumer backlash, one brewery made the decision to transform its stale, sexist mascot into an empowering ode to brave women.

“While it was never the intention to offend, the Elsie Mo pump clip [the badge that attaches to a beer draft handle] had been a contentious issue for some time,” Lewis Townsend, Castle Rock Brewery’s head of marketing, said in an email. “The time felt right to rework the clip to better present the character of Elsie while retaining the heritage of the original clip.”

The name “Elsie Mo” came from one malt, called Low Color Maris Otter, also known as the “LCMO” used in the beer’s recipe. Inspired by “aircraft nose art” — the sexy images of women that pilots placed on the nose of planes during the two world wars — Castle Rock decided to fashion a 1940s-style pinup, a buxom blonde in a revealing pink shirt and short shorts, to create a character that embodied a woman named Elsie Mo. With the tagline “Full-bodied and totally irresistible,” the sexy innuendo was pretty clear. In 2014, a rebrand ushered in a new but equally sexy tagline and scantily clad woman.

The 2018 rebrand that makes the character Elsie Mo a pilot is meant to “acknowledge and commemorate” the “women pilots of World War II who took to the skies,” Townsend said. The brewery was inspired by Spitfire Women of World War II, a collection of true stories of female pilots in the Air Transport Auxiliary (a British civilian group supporting the Royal Air Force) who flew unarmed.

In the U.S., breweries are moving slowly away from innuendo-laced labels. The Brewers Association, a trade group supporting small and independently owned American breweries, has strict marketing guidelines for member breweries that forbids the use of derogatory or discriminatory images and language. Those rules went into effect in April.

Modern beer labels and beer advertising “is more culture- and gender-inclusive than in the past. That is positive progress,” Julia Herz, Brewers Association craft beer program director, said in an email. “It is good to see brewers representative of the values, ideals and integrity of a diverse and inclusive culture.”

And beer fans are saying “cheers” to the changes. On Twitter, many users applauded Castle Rock’s new “Elsie Mo.” User David Glenwright tweeted, “It’s brilliant to see an homage of an often forgotten group of women who played a vital role in the war.”

“The feedback has been overwhelmingly positive,” Townsend said. “We hope [the new Elsie Mo] reflects the message that beer is for everyone.”