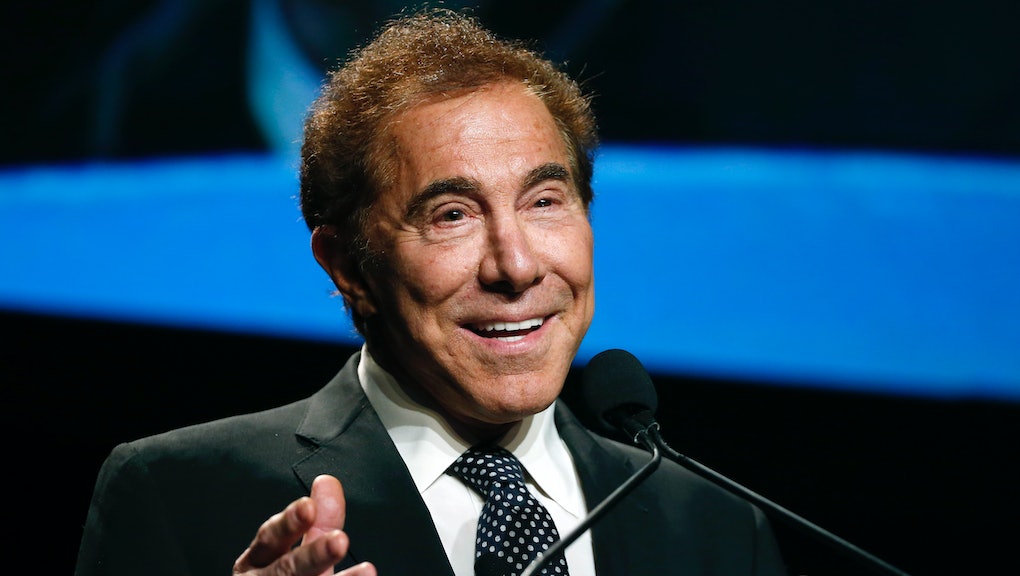 Steve Wynn, the billionaire casino magnate and current finance chairman of the Republican National Committee, has been accused by dozens of people of improper sexual behavior, the Wall Street Journal reported Friday. The accusations include an allegation that he pressured a manicurist for sex in 2005.

According to the WSJ report, Wynn paid a $7.5 million settlement to a manicurist who accused Wynn of pressuring her into getting naked and having sex with him on a massage table in his office.

The unnamed massage therapist told the WSJ that Wynn’s behavior escalated over the course of multiple sessions. At first, he exposed his genitals and rubbed her leg during a massage session. That progressed into Wynn instructing her to massage his penis until he ejaculated, and later to perform oral sex on him, an act the woman told the WSJ she refused to do.

After the massage therapist told Wynn she was not comfortable with what he was asking her to do, Wynn stopped coming to her for massages.

Wynn’s behavior is also detailed in an early 1990s deposition from Dennis Gomes, a former executive at the Golden Nugget casino in Las Vegas which Wynn used to run. In the deposition, Gomes said he “routinely received complaints from various department heads regarding Wynn’s chronic sexual harassment of female employees,” according to the WSJ.

Wynn denied the allegations in a written response to the WSJ, saying “The idea that I ever assaulted any woman is preposterous.” He blamed the accusations on his ex wife, Elaine Wynn.

“The instigation of these accusations is the continued work of my ex-wife Elaine Wynn, with whom I am involved in a terrible and nasty lawsuit in which she is seeking a revised divorce settlement,” Wynn told the WSJ.

Wynn has a long relationship with President Donald Trump, both of whom are major players in the Las Vegas casino industry.

After he was elected president, Trump asked Wynn to become the finance chairman of the RNC, a role Wynn has held since January 2017.

It’s unclear whether the RNC will force Wynn to step down, or what the RNC will do with the money Wynn helped raise.

RNC Chairwoman Ronna McDaniel went on a crusade against the Democratic National Committee after the Harvey Weinstein scandal, asking whether the DNC would return Weinstein’s donations.

“If the DNC truly stands up for women like they say they do, then returning Weinstein’s dirty money should be a no-brainer,” McDaniel tweeted in October 2017.

Wynn has been a major Republican donor, giving hundreds of thousands of dollars to Republican House and Senate candidates, including Sen. Dean Heller (R-Nev.) — one of the most vulnerable Senators up for re-election in November.