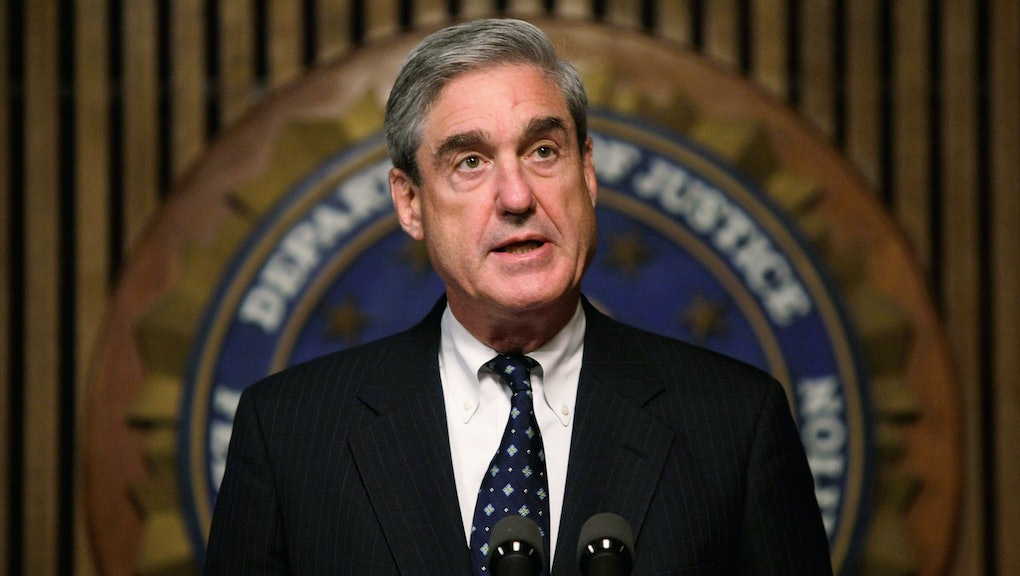 According to the Times report, Trump backed down from his request for Mueller’s termination after White House counsel Don McGahn threatened to quit over the decision — yet the report noted that Mueller’s fate still remains an “omnipresent concern” among the president’s aides and legal team.

Mueller’s fate, however, isn’t solely in Trump’s hands. Currently, the only person with the authority to fire Mueller is Deputy Attorney General Rod Rosenstein, who is overseeing the investigation after Attorney General Jeff Sessions recused himself. As stipulated in the current U.S. law, “the Special Counsel may be disciplined or removed from office only by the personal action of the Attorney General.” A special prosecutor may be removed from their post “for misconduct, dereliction of duty, incapacity, conflict of interest, or for other good cause, including violation of Departmental policies.”

Rosenstein has said that he’s unwilling to terminate Mueller — but Rosenstein’s employment is also potentially under threat. A separate New York Times report published Sunday alleged that Trump is currently “telling associates that he is frustrated with Mr. Rosenstein” after contemplating firing him over the summer, and Republicans may be seeking to undermine him by publishing a memo involving Rosenstein that was crafted by conservatives on the House Intelligence Committee.

If Trump were to fire Rosenstein, he could replace the deputy attorney general with one more likely to do his bidding and fire Mueller, as President Richard Nixon did during the “Saturday Night Massacre” in 1973.

While Trump has control over Rosenstein’s employment, Congress does have the power to protect Mueller by adding extra checks on the attorney general’s currently unfettered power over a special prosecutor’s employment. Here are two current pieces of legislation that have been proposed to keep Mueller working — and what lawmakers are saying about them in the wake of the Times report.

The first piece of legislation that could protect Mueller is the bipartisan Special Counsel Independence Protection Act, which was introduced in August by Sens. Lindsey Graham (R-S.C.) and Cory Booker (D-N.J.). The bill is cosponsored by Sens. Sheldon Whitehouse (D-R.I.) and Richard Blumenthal (D-Conn.).

“Checks and balances have served the country well for the past two hundred years,” Graham said about the legislation in a statement when it was introduced. “Our legislation would allow judicial review of the firing of any special counsel that was impaneled to look at the President or their team – regardless of party. I think this is a good check and balance, both for today and in the future.”

The second piece of legislation aimed at protecting Mueller, also introduced in August, is the Special Counsel Integrity Act. The bipartisan legislation is sponsored by Sens. Thom Tillis (R-N.C.) and Chris Coons (D-Del.).

As stipulated in the current bill, the legislation would retroactively apply to any special counsel appointed on or after May 17, 2017 — the day Mueller was appointed.

Ethics officials from past White House administrations have praised the two pieces of legislation, publishing a public letter calling on Senators to endorse the legislation. The letter was signed by former ethics czars Norm Eisen and Richard Painter, who served under Presidents Barack Obama and George W. Bush, respectively, along with former top State Department officials and Max Boot, who worked on presidential campaigns for John McCain, Mitt Romney and Marco Rubio.

Thus far, the only meaningful progress made on the proposed legislation has been a joint hearing on the two bills in September by the Senate Judiciary Committee. Though the New York Times reported that a majority of the Judiciary Committee appeared to back the bipartisan legislation, legal experts brought in to testify were divided on the bills’ constitutionality.

Akhil Reed Amar, a constitutional law expert at Yale Law School, speculated that the legislation could violate the constitutional separation of powers, warning that it could be vetoed by Trump and later invalidated by the courts as unconstitutional.

Two other legal experts, law professors Eric Posner of the University of Chicago and Stephen Vladeck of the University of Texas, disagreed, saying that the legislation would be constitutional. The experts cited the Supreme Court case Morrison v. Olson, which asserted that a special prosecutor’s function was constitutional and not in violation of separation of powers. The decision was based on a statute outlining the special prosecutor’s function that has since expired — which was tougher than the current regulations — though USA Today noted that the court’s ruling still stands.

The legal experts also cited specific issues with the current legislation, such as the retroactive start date of the Special Counsel Integrity Act, USA Today noted. John Duffy, a law professor at the University of Virginia, also suggested the power given to the courts in the Special Counsel Independence Protection Act may violate the Constitution by giving power of hiring and firing to the courts, rather than the Executive Branch.

Lawmakers appeared receptive to the issues raised by the legal experts and suggested the bills would be tweaked to address the constitutional concerns, according to USA Today.

Since the September hearing, however, little progress has been made on the legislation. Senate Judiciary Committee Chair Charles E. Grassley (R-Iowa) told the New York Times following its bombshell report that the two pieces of legislation would have to be reconciled into a single bill before it could move forward in the Senate committee.

Though Grassley told the Times he did not currently consider the legislation to be a priority, Democratic aides cited by the Times suggested Friday that lawmakers would now be working to merge the “best parts” of the two pieces of legislation together “over the next several days.”

What lawmakers are saying about the legislation now

After months out of the spotlight, the proposed legislation protecting Mueller is now gaining attention once again in the wake of the Times report.

Democrats in the Senate are making the legislation protecting Mueller a priority and have proposed tying it to the current round of budget negotiations, according to the New York Times.

“The most important thing Congress can do right now is to ensure that special counsel Mueller’s investigation continues uninterrupted and unimpeded,” Senate Minority Leader Chuck Schumer (D-N.Y.) told the Times. “No one — whether it be administration officials, Republicans or the president himself — should get in the way and undermine the investigation.”

Despite the Times report, however, many in Congress still remain unconvinced about the need for a legislative solution, even as they defend Mueller as a prosecutor. House Majority Leader Kevin McCarthy (R-Calif.) dismissed the potential legislation Sunday in an appearance on Meet the Press, in which he said he “doesn’t think there’s a need” for such legislation.

On the Democratic side of the aisle, Sen. Joe Manchin (D-W.Va.) dismissed the report of Mueller’s proposed termination as “New York talk,” though the moderate senator predicted that if Trump fired Rosenstein, there would be a bipartisan consensus that legislation is needed.

“I think at that time there’ll be Democrats and Republicans saying, ‘Time to protect the judicial system and the three branches of government having equal power,’” Manchin said Sunday on Meet the Press about Rosenstein’s hypothetical termination. “Absolutely.”

Even before Rosenstein’s termination, however, other Republicans have suggested that it’s now time to support a legislative solution. Sen. Susan Collins (R-Maine) said on CNN Sunday that it “probably wouldn’t hurt” to pass legislation protecting Mueller, after host Jake Tapper noted that she previously didn’t “see the need” for such legislation.

“There are some constitutional issues with those bills, but it certainly wouldn’t hurt to put that extra safeguard in place given the latest stories,” Collins said.

Graham, also reasserted the need for his proposed bill in an appearance on ABC’s This Week> Sunday, during which he claimed that “everybody in the White House knows that it’d be the end of President Trump’s presidency if he fired Mr. Mueller.”

“I think Mr. Mueller is the perfect guy to get to the bottom of all this, and he will,” Graham said Sunday. “I think my job, among others, is to give him the space to do it, and I intend to do that, and I’ve got legislation protecting Mr. Mueller, and I’ll be glad to pass it tomorrow.”