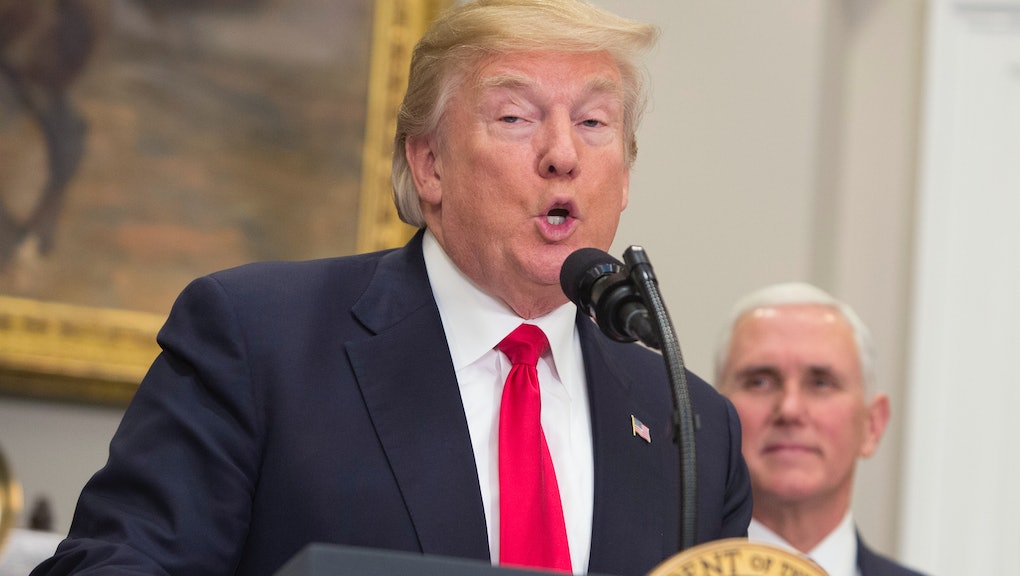 After more than an hour of speaking, Trump has wrapped his first State of the Union.

For all the talk of a bipartisan tone, Trump’s speech was, for the most part, standard Trump fare, filled with attacks on immigrants and talk about his “America first” policies.

Pundits will now pontificate about what the speech means.

However, polling shows that State of the Union addresses rarely change a president’s approval rating.

Mic will have a full rundown fact checking Trump’s speech on Wednesday morning.

Trump spoke about a number of issues dear to conservatives, including the Second Amendment, military spending and tax cuts.

However Trump mentioned nothing about deficits — something congressional Republicans crowed about for eight years under former President Barack Obama.

Noah Rothman, a conservative pundit at Commentary Magazine, pointed this out.

“Dear pundits: a ‘conventional conservative speech’ would include at least a nod to the fact that the debt unsustainable and entitlements are careening toward insolvency,” Rothman tweeted.

Trump’s speech took a dark turn when he began talking about immigrants, bringing up crime committed by the MS-13 gang.

“For decades, open borders have allowed drugs and gangs to pour into our most vulnerable communities,” Trump said. “They have allowed millions of low-wage workers to compete for jobs and wages against the poorest Americans.  Most tragically, they have caused the loss of many innocent lives.”

Trump also brought up the Deferred Action for Childhood Arrivals program, which Congress is trying to codify into law. The program would allow undocumented immigrants who were brought to the U.S. as minors to live and work in the U.S.

Trump said he was “extending an open hand to work with members of both parties — Democrats and Republicans — to protect our citizens of every background, color, religion, and creed.”

However, he said he’s sticking to four pillars of immigration reform he must see in order to sign a bill — including cutting legal immigration and building a wall between the U.S. and Mexico. He then made a comment that is unlikely to endear him to Democrats and immigration activists.

“My duty, and the sacred duty of every elected official in this chamber, is to defend Americans — to protect their safety, their families, their communities and their right to the American dream,” Trump said.

“Because Americans are dreamers too,” he added.

“Under the current broken system, a single immigrant can bring in virtually unlimited numbers of distant relatives,” Trump said, not mentioning that it takes years for immigrants to sponsor family members to come to the U.S.

In fact, Trump’s own family benefited from “chain migration”, as his own mother was brought to the U.S. by a sibling.

The president’s speech is full of catnip for his base.

Trump declared that Americans “proudly stand for the national anthem” — a jab at black NFL players who knelt during the anthem last year.

He went on to say that he is “defending our Second Amendment” and has “taken historic actions to protect religious liberty.”

He also touted the conservative justices he’s appointed, including Supreme Court Justice Neil Gorsuch, who looked stone-faced as Trump spoke about him.

However, what Trump didn’t say is that black unemployment had been falling during former President Barack Obama’s tenure. And the 6.8% unemployment rate is still higher than the national rate.

The full text of Trump’s speech has been released. You can read it here.

Trump arrived and shook hands with the GOP members of Congress who waited hours in the aisles of the House chamber to get a handshake from the commander in chief.

Aside from members of Congress and Trump’s cabinet, other major political figures also attend the State of the Union, including justices of the Supreme Court.

However, this year just four of the nine justices will be in attendance.

Chief Justice John Roberts will be there, as will Trump-appointed Justice Neil Gorsuch and two of the court’s liberal judges, Stephen Breyer and Elena Kagan.

Justice Ruth Bader Ginsburg, who made news in 2015 after falling asleep during former President Barack Obama’s speech, won’t be in the audience this year.

First lady Melania Trump bucked tradition and traveled to the Capitol — where Trump will soon deliver the State of the Union address — alone.

Her solo venture to the Capitol is not traditional — usually the president and first lady travel together.

Her solo trip comes after a recent report that Trump’s lawyer paid adult film actress Stormy Daniels hush money before the election. Daniels detailed an affair she claimed to have with Trump in a 2011 interview with InTouch Weekly, which has recently resurfaced.

The White House, however, denies that the first lady’s separate trip to the Capitol is a sign of anything out of the ordinary.

“No reason other than she can greet the guests and he can go straight in,” White House press secretary Sarah Huckabee Sanders told CNN.

8 p.m.: Did Trump steal a phrase from Hillary Clinton?

According to excerpts from Trump’s speech, he will declare that, “This is our new American moment.”

That phrase is not unique. In fact, Trump’s defeated rival Hillary Clinton used the exact same phrase in a 2010 speech while serving as secretary of state.

In the speech, Clinton declared that then-President Barack Obama was ushering in “a new American moment” in foreign policy.

Trump will claim in his address that 3 million workers have already received bonuses, thanks to the tax reform bill passed by Republicans, according to excerpts from his speech.

“Since we passed tax cuts, roughly 3 million workers have already gotten tax cut bonuses — many of them thousands of dollars per worker,” Trump will say.

Where does that statistic come from? It appears it’s a number compiled by Americans for Tax Reform, an anti-tax advocacy group founded by Grover Norquist.

ATR has been compiling a list of companies that said they gave their employees bonuses due to the tax bill.

During the State of the Union, almost every high-level official in the presidential line of succession is in the U.S. Capitol for the president’s speech.

So, in order to ensure that there is still a living official in the presidential line of succession should the Capitol fall under attack, one cabinet member is deemed the designated survivor and is taken to a private and secure location for the duration of the speech.

The White House has released excerpts from Trump’s address — a handful of passages from the speech that give a flavor of what the speech will look like.

As predicted, Trump will take a victory lap on tax reform:

Just as I promised the American people from this podium 11 months ago, we enacted the biggest tax cuts and reform in American history. ... Our massive tax cuts provide tremendous relief for the middle class and small businesses. ... Since we passed tax cuts, roughly 3 million workers have already gotten tax cut bonuses — many of them thousands of dollars per worker.

And Trump does look to be striking a more collegial, bipartisan tone than the acerbic and antagonistic tweets he often sends.

Tonight, I want to talk about what kind of future we are going to have, and what kind of nation we are going to be. All of us, together, as one team, one people, and one American family. ... Americans love their country. And they deserve a government that shows them the same love and loyalty in return. ... For the last year we have sought to restore the bonds of trust between our citizens and their government.

Trump will also speak about immigration reform, but not in the fiery terms he normally does.

Struggling communities, especially immigrant communities, will also be helped by immigration policies that focus on the best interests of American workers and American families. ... So tonight I am extending an open hand to work with members of both parties, Democrats and Republicans, to protect our citizens, of every background, color and creed.

And, yes, he will manage to do one of his favorite things: take jabs at his predecessor Barack Obama.

Past experience has taught us that complacency and concessions only invite aggression and provocation. I will not repeat the mistakes of the past administrations that got us into this dangerous position.

President Donald Trump is set to deliver his first State of the Union address Tuesday night, a speech in which he’s likely to take a victory lap on the economy and tax cuts and lay out his policy agenda for the next year.

Trump has invited a number of guests to sit in first lady Melania Trump’s box for the event, including the parents of victims of violence by the MS-13 gang, Americans who will benefit from the tax reform and an Immigration and Customs Enforcement agent. Democrats are bringing guests that align with their policy goals and values, including sexual assault survivors who are fighting for the #MeToo movement, as well as undocumented immigrants who were brought to the country as minors.

Mic will provide coverage of the event, which begins at 9 p.m. Eastern, including live fact checks of Trump’s speech and color commentary.