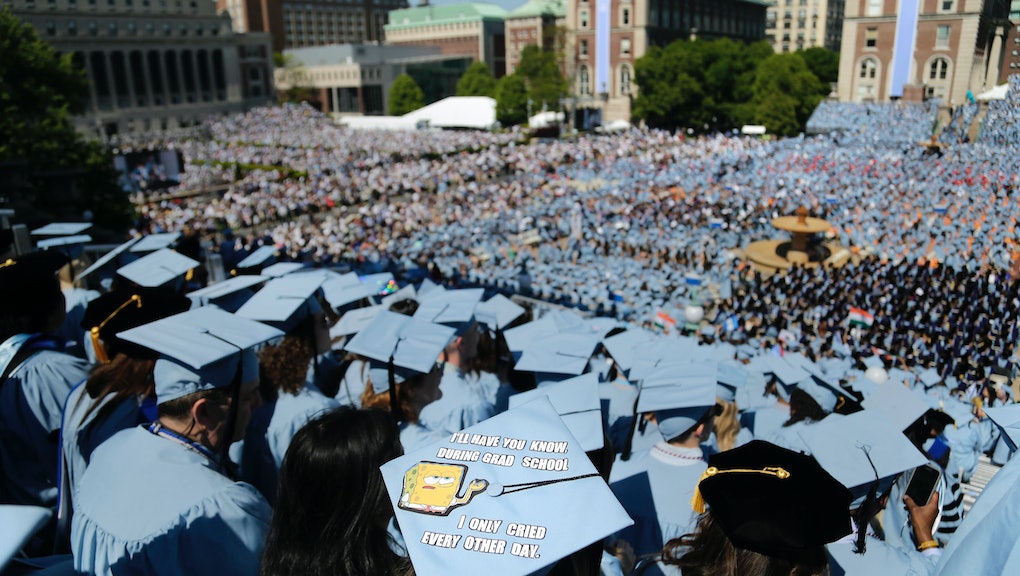 Less than a week after President Donald Trump gave his State of the Union address touting the strength of the American economy under his presidency, the stock market saw one of its worst trading days in recent history, with stocks falling by about 1,175 points.

With the markets in turmoil and the fate of the U.S. economy under Trump looking more uncertain than ever, a new report has given lawmakers an easy guide on how to alleviate the economic pressure on 44 million Americans, while also lowering unemployment and growing the economy with one painfully simple policy. The answer: cancel all student debt.

A report from a group of economists at the Levy Economics Institute of Bard College finds that there would be huge benefits if the federal government were to forgive all existing student debt. This would ripple out from young people struggling to pay off massive college loans to the economy as a whole, according to the report.

“The idea of canceling student debt is not just some crazy idea out of left field, but is actually something that could be done, and done in a way that has a moderately positive economic impact,” Marshall Steinbaum, a fellow and research director at the Roosevelt Institute and a coauthor of the report said in an interview.

“The way this and similar polices are often discussed is in a mode of ‘well can we really afford this?’ and the answer is definitely yes,” he added.

The report finds that canceling all student debt would likely lead to an increase in U.S. GDP between $861 billion and $1,083 billion over the course of 10 years. It would also lead to an increase of 1.18 to 1.55 million additional new jobs over the same period — that’s about 50% to 70% more jobs per year compared to an average of recent years.

This new analysis comes at a time when more than 44 million American have a collective $1.3 trillion in student debt — higher than both auto U.S. debt and credit card debt.

At the same time, the Trump education department has worked against student debt activists by suspending loan forgiveness applications for more than 65,000 borrowers who claim they were defrauded into taking out high cost loans by predatory for-profit schools. Prior to taking office, Trump settled a lawsuit over his for-profit educational institution, Trump University, which was accused of defrauding students across the country.

“What our report shows is that you get a greater macro economics impact, bigger bang for the buck, and that student debt cancellation has about half the budgetary effect of the Trump tax cuts.”

The report also finds that total loan forgiveness would cost the U.S. government approximately $1.4 trillion over the course of 10 years — a number that is almost exactly the same as what the CBO recently projected the Republican’s new tax bill would cost.

But researchers said that the positive impacts of canceling student debt would likely be more broadly felt than those of the tax bill.

“[The GOP tax bill] is going to add 1.5 trillion to deficits over the next 10 years,” Stephanie Kelton, Stony Brook University professor of public policy and economics, said in an interview. Kelton is one of the authors of the report, and recently worked as the chief economists for the Democratic minority on the Senate budget committee.

“What else could we do? Canceling student loan debt was just about perfect because it comes in at about 1.4 trillion and it’s almost six of one, half a dozen of the other in terms of the price tag,” she said.

Kelton emphasized that U.S. government shouldn’t be thinking of how it can spend money to help Americans as a zero sum game. But at the same time, if lawmakers can spend money to provide massive tax cuts for the wealthy and corporations, it can also afford to spend nearly the same amount to cancel student debt and grow the economy simultaneously.

“What our report shows is that you get a greater macro economics impact, bigger bang for the buck, and that student debt cancellation has about half the budgetary effect of the Trump tax cuts,” Kelton said.

The notion of large-scale student loan relief has been around since at least 2011, when the Occupy Wall Street movement helped spotlight the student debt crisis as a major political issue. Since then, a number of proposed policies for debt relief and restructuring have surfaced, often presented as “debt-free” college. Support for those proposals have been growing, particularly among Democratic lawmakers, despite opposition from the financial services industry.

But the Levy Economics Institute analysis goes a step further, by giving serious consideration to the question of what would happen if the federal government were to assume responsibility for all student debt — full stop.

The report also found that canceling student debt could attenuate some longstanding racial disparities in debt and education. It noted that, because of longstanding generational disparities in family wealth and income, black and Hispanic borrowers tend to take on higher levels of debt and have a harder time paying it off than their white counterparts.

Eliminating student debt, the report shows, would help keep the high cost of borrowing from exacerbating the racial wealth gap between the growing number of Americans seeking better employment through higher education.

Though the current Republican White House and GOP-controlled Congress are unlikely to take up an ambitious policy like total student debt relief, the broad potential benefits and relatively low costs make it a relatively appealing policy for lawmakers to consider in the future. To cast the proposition in terms our current president might use, “what do they have to lose?”