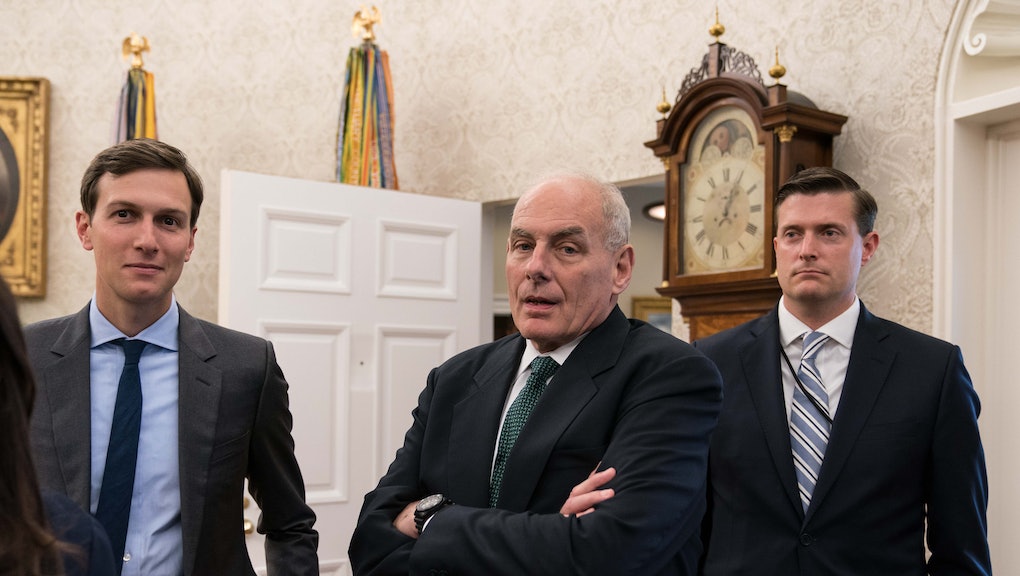 John Kelly: Over 1 million immigrants “too lazy to get off their asses” and sign up for DACA

On Tuesday, White House chief of staff and former Homeland Security Secretary John Kelly insinuated that more than 1 million United States immigrants were “too lazy to get off their asses” and sign up for protection from the federal government.

While speaking to a group of reporters about President Donald Trump’s proposed immigration plan, Kelly was asked a question about the Deferred Action for Childhood Arrivals program, which protects undocumented immigrants who came to the U.S. as children. The program is set to expire on March 5.

While answering the question, Kelly took the opportunity to lambast more than 1.1 million undocumented individuals who have not registered for the program.

“There are 690,000 official DACA registrants, and the president sent over what amounts to be 2 1/2 times that number, to 1.8 million,” Kelly said. “The difference between [690,000] and 1.8 million were the people that some would say were too afraid to sign up, others would say were too lazy to get off their asses, but they didn’t sign up.”

Kelly’s response overlooks those who were not willing or able to register for the program, but also wildly misrepresents their circumstances.

On Sept. 5, the Trump administration announced its sudden decision to let the DACA program expire — six months from that date — unless Congress comes up with what is deemed to be an acceptable legislative solution.

As of that announcement, anyone who had not previously been enrolled in the program was immediately barred from signing up. This meant anyone who had not signed up for DACA before that point, or had allowed their DACA status to expire, was officially ineligible from that point forward.

In addition, the administration gave current DACA recipients only one month to apply to renew their status. This is a time-consuming process with an application fee of nearly $500 — a prohibitive sum for any DACA recipient of limited means. A later court ruling ordered the administration to continue accepting renewal applications after the deadline.

The administration also told the news outlet Mother Jones in September that they could at some point change an Obama-era rule and allow the United States Citizenship and Immigration Services to share important personal information from DACA applications with immigration enforcement officials, in the event the program expired.

This left many DACA recipients worried that if they were to provide current personal information, they could be enabling their own deportation, if the program were to end.

The DACA program remains in limbo, as a court ruling has prohibited Trump from ending the program while a challenge to his order makes its way through the courts. However, should that case be settled, or that order overruled by another court, the program could end as soon as March 5.