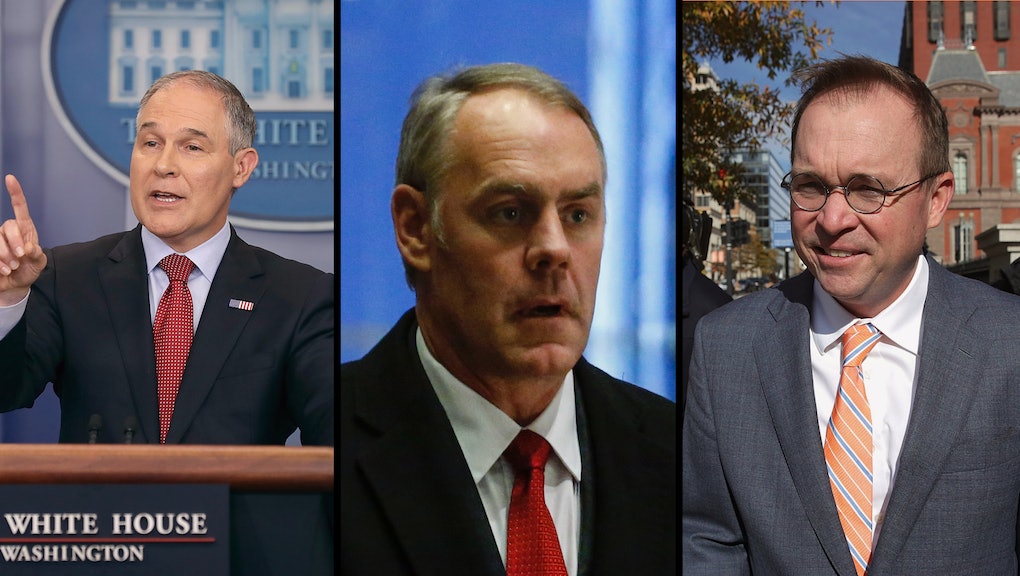 While you weren’t looking: 5 stories from the Trump administration that weren’t about domestic abuse

This week’s news was dominated by the resignation of White House staffer Rob Porter, who was accused by both of his ex-wives of having physically abused them.

The fallout over Porter’s past — including accusations that other senior Trump officials including White House chief of staff John Kelly knew about the abuse allegations months in advance — eclipsed a lot of other news stories that might have roiled any other administration.

Here are five important stories you may have missed.

DHS draft report calls for longterm surveillance of Muslims living in the U.S.

A draft report from the Department of Homeland Security written in late January calls for the demographic profiling and longterm surveillance of some Sunni Muslims living in the United States, according to Foreign Policy.

The report, which focuses on terrorist attacks that have occurred over the past 15 years claims that there would be “great value for the United States government in dedicating resources to continuously evaluate persons of interest” and tracking them on a “long-term basis.”

This is not the first time that officials in the U.S. have attempted to surveil Muslim communities. In 2014, the New York Police Department shuttered its controversial “demographics unit,” in which plainclothes police officers entered Muslim communities to monitor people going about their daily lives.

This new proposal suggests that the Trump administration is prepared to resurrect some of New York’s highly criticized tactics and implement them on a national level.

The Consumer Financial Protection Bureau, under the leadership of former-CFPB critic Mick Mulvaney, has reportedly pulled back in its inquiry into 2017’s massive Equifax data breach.

In September, the credit-reporting company Equifax announced that hackers had breached their security and collected personal information on 143 million Americans — more than 40% of the entire U.S. population.

According to Reuters, sources inside the CFPB claim that since taking charge of the agency, Mulvaney has not ordered any subpoenas of Equifax records. He has also not sought any sworn testimony from its management, and has ended plans to test Equifax’s data security methods, the sources say.

A group of more than 30 senators have sent a letter to the CFPB demanding answers about the CFPB’s investigation.

After U.S. courts struck down Trump’s ban on transgender people serving in the military, the administration has now decided to abandon its legal defense of that order and issue a whole new policy for the courts to evaluate, according to BuzzFeed News.

Justice Department officials reportedly told U.S. District Judge Marvin Garbis, who is overseeing the case, that they will disclose their new policy on Feb. 21.

Trump’s initial order was viewed by many as a blatantly bigoted attempt to appease social conservatives in his base. After multiple successful legal challenges, the administration was forced to resume admitting new transgender recruits at the beginning of 2018.

Now the Trump administration appears poised to craft a new policy in an attempt to pass legal muster.

In an interview with a Nevada local TV news station, Environmental Protection Agency administrator Scott Pruitt told reporters that, while human activity may be responsible for climate change “to a certain degree,” he thinks that might be a good thing.

“We know humans have most flourished during times of warming trends.” Pruitt said.

“There are assumptions made that because the climate is warming that necessarily is a bad thing. Do we know what the ideal surface temperature should be in the year 2100 or year 2018? It’s fairly arrogant for us to think we know exactly what it should be in 2100,” he said.

Pruitt has previously expressed skepticism about whether humans contribute to climate change. Those beliefs have caused widespread concerns among career scientists within the EPA.

Now he appears to be attempting to allay those concerns by telling them that climate change is real, but why not give it a chance?

The governors of 19 Western states are expressing their frustrations with Interior Secretary Ryan Zinke. The secretary is refusing to include them on any of the major changes his department is making as he reorganizes the agency, according to a report from the Associated Press.

In a letter sent last week, the Western Governors Association — a group consisting of 12 Republican governors, six Democratic governors and one independent governor — asked that their input be included on any efforts to overhaul the department’s policies. One week later, those governors say they have heard nothing from Zinke.

The Interior Department has oversight of nearly 700,000 square miles of federal land, which makes up broad swaths of Western state territory. It also oversees the Bureau of Indian Affairs, which controls another 103,000 miles of land.

Zinke’s planned overhaul includes a reorganization of the boundaries of federal land. This could have a considerable impact on Western states.

The group of Western governors sent Zinke a list of 10 questions, including some about why his plan was even necessary to begin with.