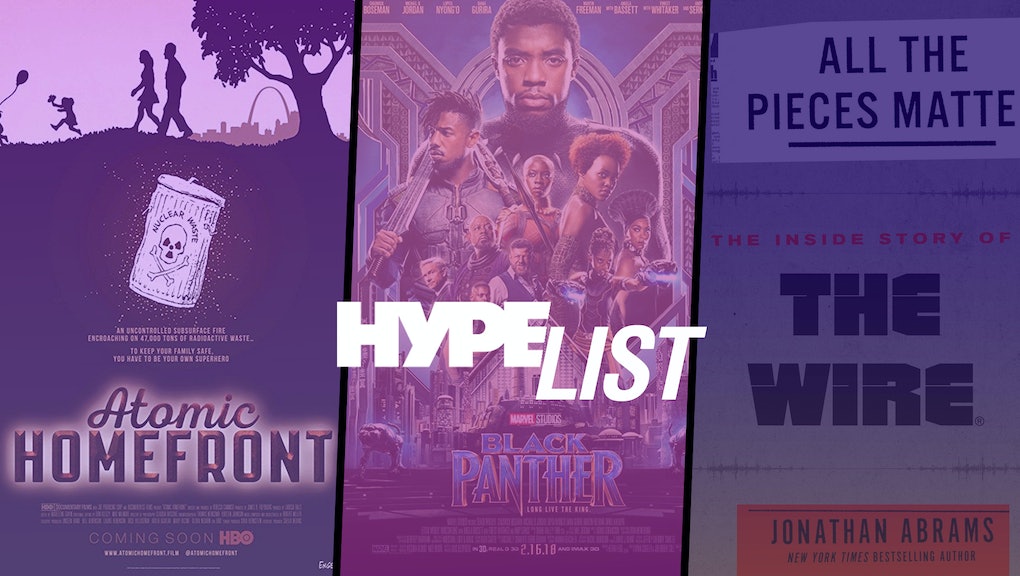 Hype List: What to check out this week, including ‘Black Panther’ and ‘The Inside Story of The Wire’

You probably don’t need me to tell you why this movie’s going to be hot, but I’ll list a few reasons anyway: the nearly all-black cast and creatives involved, the fire soundtrack, a ripped Michael B. Jordan playing the villain. Shall I continue? The latest Marvel film picks up with Chadwick Boseman’s T’Challa (aka Black Panther) where we last left him in 2016’s Captain America: Civil War. Our hero’s still grieving the death of his father while simultaneously learning how to be a hero and king to his country, the fictional African nation of Wakanda.

When his nemesis, Jordan’s Erik Killmonger, returns from exile with a vengeance and plans to take over the kingdom, T’Challa must look within himself to combat his own insecurities and secure his rightful place on the throne. For black audiences — especially black kids — this film stands as a landmark for representation that will hopefully spur industry leaders to invest in more black filmmaking.

Black Panther will be released in theaters Friday.

Book: All the Pieces Matter: The Inside Story of The Wire

The Wire is widely (and rightly) considered one of the greatest and most profound TV shows of all time. And as with any hall-of-fame-worthy bit of pop culture, the behind-the-scenes story is about as fascinating as the work itself. Enter All the Pieces Matter, a new oral history about the making of The Wire. Ten years after the prestige drama’s final season aired, writer Jonathan Abrams presents firsthand accounts from the actors, writers and other creatives involved with the crafting of the Dickensian series. The origins of Sen. Clay Davis’ signature “sheeeeeeeeeit” catchphrase, the real-life politicians and policies that inspired the scripts — Abrams shares it all in a book that’s essential reading for disciples of The Wire, but could also be considered a how-to on doing meaningful work that endures.

All the Pieces Matter: The Inside Story of The Wire will be released Tuesday via Crown Archetype.

There’s always fear about how and where nuclear weapons could be used, but it’s too easy to forget they also come from somewhere — often to the detriment of a region. In the new documentary Atomic Homefront, director Rebecca Cammisa focuses on one such area in St. Louis, Missouri, where a uranium processing center for some of the first atomic bombs was located. Taking us through the history of corporate and governmental negligence in the region, the film offers an unflinching look at the ways toxic waste has negatively affected local residents.

It also tells the story of a group of, as HBO’s site puts it, “moms-turned-advocates” who refuse to stand idly by while their community is ravaged by radioactive material. Atomic Homefront isn’t just a history lesson — it’s a clinic on activism and the power of everyday people.

Atomic Homefront will premiere Monday at 8 p.m. Eastern on HBO.