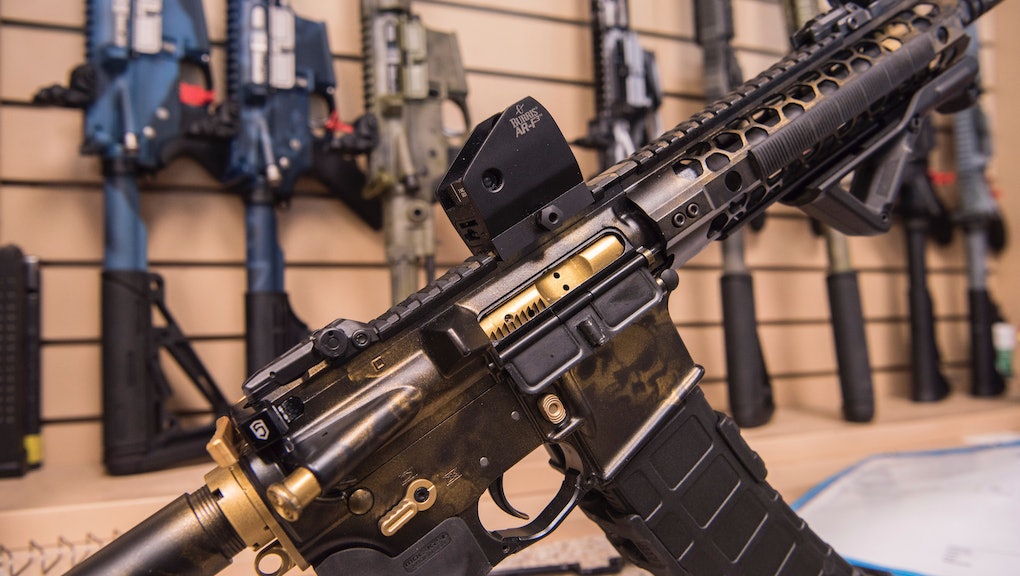 As the federal government fails to act, here’s what states have done for gun control under Trump

The deadly school shooting in Parkland, Florida, on Wednesday has led to renewed calls for gun control legislation — a cause that the federal government is unlikely to take up.

A familiar narrative has emerged in the wake of this latest mass shooting, as Republican members of Congress offered their “thoughts and prayers” to victims while refusing to politicize the tragedy by discussing gun control legislation. Such responses reflect a broader pattern throughout the Trump administration: Even though 2017 was the deadliest year of mass shootings in recent U.S. history, and there have been an additional 41 mass shootings in 2018 so far, the federal government under Trump has failed to take action any on gun control. In fact, they’ve even made things worse.

“The possibility of evidence-based firearm laws has become so politically toxic that there’s essentially zero action on firearm legislation likely to reduce rates of gun deaths in a meaningful way,” Aaron Kivisto, a clinical psychologist who has studied gun laws at the University of Indiana, told the Hill.

Yet there are also signs of hope for gun control advocates, as states across the country have taken up measures to combat the federal government’s inaction.

Meanwhile on the state level, there have also been victories for gun rights proponents. Iowa passed a new “stand your ground” law as part of a sweeping gun rights package in 2017, while other states have eliminated requirements for obtaining concealed carry permits and expanded where concealed firearms are allowed. On Wednesday, just after the Parkland shooting, the House Judiciary and Public Safety Committee in the Arizona legislature passed a measure that would dismantle gun safety requirements for foster parents.

The Oct. 1 mass shooting at a country music festival in Las Vegas brought wider attention to bump stocks, a firearm accessory that allows a semi-automatic weapon to mimic the functionality of an automatic weapon. Though a bump stock ban seemed to garner bipartisan support in the wake of the Las Vegas shooting, the federal government still has yet to act on restricting the deadly accessory.

States and local governments, however, have taken up the bump stock fight. In November, Massachusetts became the first state to pass a law banning bump stocks after the Las Vegas shooting, and Columbia, South Carolina, banned the accessory in December. Columbia was the first known city to enact such a ban, according to CityLab, and Denver has since followed suit. Prior to the Las Vegas shooting, the devices were already banned in California and New York, the Huffington Post noted.

In January, New Jersey Governor Chris Christie signed a bump stock ban into law before leaving office. The move may be the start of a broader streak of gun control legislation in the state; Christie’s Democratic successor Phil Murphy has already reversed a measure that made it easier for residents to obtain handgun permits and has vowed to sign a series of gun control measures currently making their way through the state legislature.

Even more states may soon follow Massachusetts and New Jersey’s lead. Bills banning bump stocks are being considered in at least 15 states, according to the Washington Post, including Washington, Pennsylvania, Indiana and Colorado.

Legislation targeting domestic abusers has also been a key way for states to tackle gun violence. Individuals convicted of domestic violence are currently banned from obtaining firearms under federal law — but there are several loopholes. The federal law only applies to “a current or former spouse, parent or guardian of the victim” or someone who shares a child or lives with the victim, rather than all intimate partners — despite the fact that, according to the Giffords Law Center to Prevent Gun Violence, almost half of all murders committed by intimate partners are carried out by non-spouses.

Federal law also only addresses restrictions on obtaining firearms; in 41 states, Slate noted in April 2017, domestic abusers were still allowed to keep any firearms they already have. A 2009 study found that cities with gun relinquishment laws for domestic abusers had 25% fewer domestic gun homicides than those without such laws.

As a result, states have been taking stricter precautions against domestic abusers and firearms. Abused women are five times more likely to be killed if their partner possesses a firearm, though such legislation also protects the public at large, as there is an established link between domestic abusers and mass shootings.

In 2017, Louisiana expanded their domestic abuse laws to include “dating partners,” while Utah banned subjects of permanent protection orders and those convicted of misdemeanor domestic assault from acquiring guns. New Jersey, Tennessee, Maryland, Rhode Island and North Dakota also enacted laws prohibiting gun possession for domestic abusers in 2017, with the North Dakota law authorizing the arrest of any abusers who do not relinquish their firearms.

In July 2017, Washington became the first state to pass a law enabling domestic violence victims to learn if their abuser has attempted to buy a gun. The law also requires licensed gun sellers to report failed background checks. According to NPR, the legislation has had productive results; as of January, the state reported that 1,231 firearm applications had been denied and 152 reports had been referred to local law enforcement.

On Thursday, Oregon became the latest state to address domestic violence legislation. The state’s House of Representatives passed a bill that would prohibit gun possession for those accused of domestic violence against a partner who isn’t their spouse, as well as those convicted of misdemeanor stalking.

“We already know that domestic violence has a significant connection to mass homicide where firearms are involved,” Kim Gandy, president and CEO of the National Network to End Domestic Violence, said in a November 2017 interview with Mic. “And unless we as a country take this seriously and put genuine resources into making sure that domestic abusers don’t have guns, we are going to continue to see this happen.”

State legislatures have also targeted those whose gun ownership could pose a risk through laws establishing “extreme risk protection orders.” The legislation, which the Everytown Center for Gun Safety terms “red flag laws,” enables family members and law enforcement to seek an order that prevents an individual from accessing firearms when it’s believed they pose a risk to themselves or others.

The protection orders are only granted after a full hearing, in which individuals can respond to evidence suggesting they are too dangerous to possess a gun. The order typically lasts for up to one year and a temporary order can be granted before a hearing if there’s evidence of an immediate threat.

Extreme risk protection orders could have a beneficial effect in preventing mass shootings, as Everytown notes that mass shooting suspects from 2009 to 2016 exhibited dangerous warning signs prior to the shooting 42% of the time. In the case of the of Parkland shooting, students, school administrators and family members had all expressed concern over the behavior of suspected shooter Nikolas Cruz, who had been expelled from the high school he would later allegedly attack.

The legislation also helps to prevent suicide gun deaths, which Everytown noted currently account for almost two-thirds of all gun deaths. A study cited by the Giffords Law Center found that in Connecticut, one suicide death was prevented for every 10.5 guns seized under their red flag law.

In addition to Connecticut, red flag laws have also been enacted in California, Washington, Indiana and most recently Oregon, whose legislation took effect on Jan. 1. Similar legislation is currently being considered in 18 states and Washington, D.C., according to Everytown.

“We think of this as a new frontier,” Jonas Oransky, Everytown’s deputy legal director told the Washington Post about red flag laws. “We don’t have a perfect system in this country, and we can’t stop every act of gun violence. This is a way for states to take some care and be somewhat nimble when there is a dangerous case.”