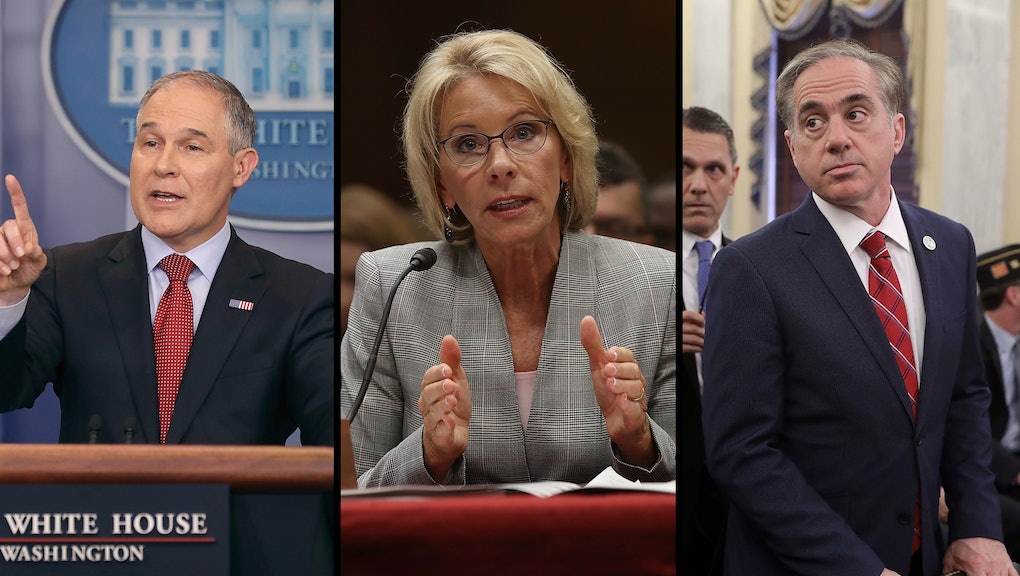 While you weren’t looking: 5 stories from the Trump administration that aren’t about gun violence

Yet another week of American life has been consumed by the tragic news of a mass shooting. On Wednesday, 17 people — many of them teenagers — were gunned down at a high school in Broward County, Florida.

As the nation mourned, and Congress put off taking action yet again, the Trump administration was fending off a series of scandals and carrying out a number of controversial policy decisions.

Here are five important stories you might have missed.

Veterans Affairs Secretary David Shulkin has spent the past week beating back a scandal that could threaten his job.

According to a watchdog agency for the VA, Shulkin improperly paid for his wife’s travel to Europe, took an extended vacation on taxpayer’s dime and unlawfully accepted tickets to the women’s tennis final at Wimbledon.

At least one Republican member of Congress has called on Shulkin to resign over this below the radar scandal. Shulkin has maintained that he has done nothing wrong, and accused top officials in his agency of conspiring against him.

Because one air travel scandal is rarely enough for one week in this administration, Environmental Protection Agency Administrator Scott Pruitt has also spent the week fending off his own set of criticism about high-flying on the taxpayer dime.

Pruitt first came under fire this week when the Washington Post reported that he had been spending lavishly on first class flights, including one ticket for a trip between Washington D.C. and New York City that cost over $1,600.

Pruitt was quick to dig himself even deeper when his office defended the decision to fly first class, telling Politico that the department head was frequently confronted by the passengers in coach over his role in the Trump administration. One passenger allegedly shouted “Scott Pruitt, you’re fucking up the environment.”

For the record, Pruitt has, in fact, devoted much of his time as head of the EPA to rolling back climate change regulations. But the EPA chief apparently does not enjoy being reminded of that while taking short haul flights.

The Department of Education has officially confirmed to Buzzfeed News that it will not take any action on any of the civil rights complaints it has received on behalf of transgender students seeking to use the restrooms that align with their gender identity.

For months, the Education Department has demurred on the question of whether they would take up these cases, stating they were “studying” the issue. Now the department has apparently finished doing its homework, and remembered the fact that their part of an administration which has taken a broadly hostile position on transgender people’s rights.

The administration’s stated rationale for rejecting the complaints is that transgender people are not covered by Title IX of the Civil Rights Act, which covers equal treatment on the basis of gender in public schools.

However, two federal appeals courts have already held that this provision does cover transgender students’ rights to use the restroom associated with their gender identity.

Despite holding a relatively lackluster inauguration celebration in January 2017, the Trump administration raised a record-breaking $107 million to pay for the bash.

That left many wondering where exactly all the extra money had gone after the administration had accommodated a relatively meager turnout, and paid for the performances of D-list entertainers like “the Piano Guys” and DJ Ravi Drums.

Well wonder no more, because it turns out that nearly a quarter of the entire inauguration fund went to an event planning company run by a friend of first lady Melania Trump. Also, that company was founded just six weeks before the inauguration.

The New York Times obtained records that showed that the largest expenditure made by the Trump inaugural committee was a $26 million to WIS Media Partners, a company founded by longtime Melania Trump friend Stephanie Winston Wolkoff.

In addition to revelations about Wolkoff’s haul, the Times also reported that the Trump administration gave only $5 million of that money to charity — despite expectations that that number would be higher. Of that $5 million, more than a third went to charities involved in decorating and maintaining the White House and the vice president’s residence.

Interim Consumer Financial Protection Bureau Director Mick Mulvaney has reportedly ordered staffers in the agency he oversees to drop a lawsuit they’ve been working on for years against a major alleged predatory lender.

CFPB staff had, until recently, been building a case against Golden Valley Lending, an online lending institution that had allegedly been illegally charging people as much as 950% interest.

However, according to a NPR report, Mulvaney ordered the agency to drop the case. CFPB officials had hoped to use the lawsuit in order to win relief for the struggling borrowers, who were allegedly swindled out of thousands of dollars by Golden Valley.

At least one individual associated with Golden Valley was recently convicted on racketeering charges in a case against another online lender, leading some in the agency to wonder why Mulvaney had chosen this moment to end the case.