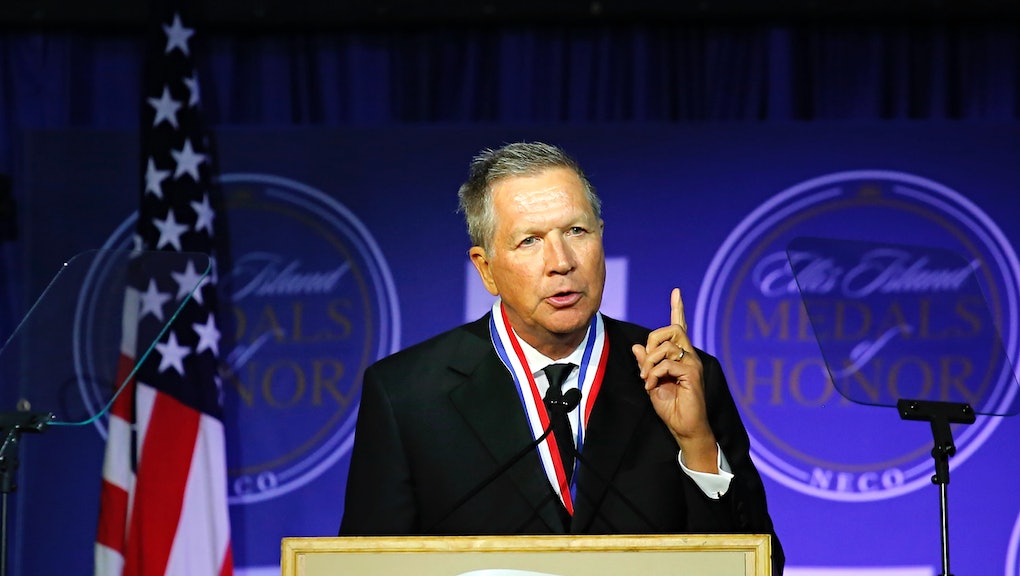 The mass shooting at a Parkland, Florida, high school Wednesday has sparked anger over Congress’ consistent inaction on gun control — including from one of the country’s most prominent Republican governors.

Ohio Gov. John Kasich blasted Congress in an impassioned appearance on CNN’s State of the Union Sunday, expressing his support for the Parkland students who have spoken out against the federal government’s inaction on gun control and telling host Dana Bash that the legislative body is “totally dysfunctional.”

“First of all, these young people are amazing, and my hope is with them,” Kasich said Sunday. “They’re absolutely right when they say that politicians have not been responding to many of [them]. You take a look at Congress, and I think Congress is totally dysfunctional.”

“Do I think they can do anything on guns? I hope they prove me wrong and they can, because I have no confidence in them,” he added.

The Ohio governor threw his support behind enacting change on gun control at the state and local level and called for “common-sense gun laws,” such as stronger background checks.

“I support the Second Amendment, I don’t know anyone who really doesn’t, but are there limits to it? ... If you’re a strong Second Amendment person, you need to slow down and take a look at reasonable things that can be done to answer these young people. And frankly, my hope is with the next generation,” the 2016 presidential hopeful added. “I mean, look at how bad things are in Congress. They can’t decide anything. They can’t decide a kid who was brought here at five years of age who’s been here 30 years ought to be able to stay. They can’t agree to anything down there.”

“Wake up. Wake up. Our country’s being hurt because of this,” Kasich pleaded.

Congress has once again come under fire for what some see as an anemic reaction to the Florida shooting, which left 17 dead. Though Democratic legislators have spoken out in favor of gun control legislation, Republican members of Congress have continued to offer “thoughts and prayers” without the promise of taking any meaningful legislative action to curb gun violence.

When asked whether Republicans in Congress need to lose their majority in order for any meaningful action to be taken on gun violence — as former Republican Rep. David Jolly claimed on CNN Wednesday — Kasich instead urged members of Congress to simply push for gun control despite the political risk in doing so.

“You know, Dana, in life, when you have a set of values, which are loving our children, or somebody else’s children, sometimes you have to put yourself at risk,” Kasich said. “You put yourself at risk that you might not get re-elected. But if you can move things forward in the name of peace in our country, and you lose an election, we’ll give you a badge and a crown. And you know what, there’s nothing — it’s not the end of the world if you lose an election.”

The Ohio governor reiterated that he was not “calling for some outright ban” on firearms, but was rather advocating “small steps that can be taken, that can be effective, and Congress ought to do it.”

“I just — I don’t have any confidence in them,” Kasich said. “I don’t think most Americans do. Nobody’s supporting them anymore on both sides. They’re both broken. And we need to come together as a country, because it is eroding us as a country. I was in the Congress, I never saw anything like what is happening down there.

“Do something,” Kasich emphasized.

The Ohio governor also took aim at President Donald Trump, who has similarly been silent on the prospect of stronger gun control legislation in the wake of the Florida shooting. The president did not use the word “gun” in his message to the nation following the shooting, and has since taken to Twitter to instead blame the FBI for the tragedy — a statement Kasich called “absurd.”

“We need leadership out of the executive — this is a great opportunity for common-sense steps that can be taken, just in the area of background checks. There should be no ability to do a casual sale without somebody finding out who they’re selling the gun to and what is involved. The president should be for that,” Kasich said Sunday, adding that reports of mental illness should also be taken more seriously by law enforcement.

“Of course the president can lead on this, and should lead on this, and Mr. President, I ask you to do this,” Kasich said. “You don’t have to boil the ocean, but take some steps now. This is an opportunity, and I believe those who are Second Amendment advocates realize that common-sense real reforms can happen in this country to answer the cries and the anguish of people across this country who have lost loved ones.”