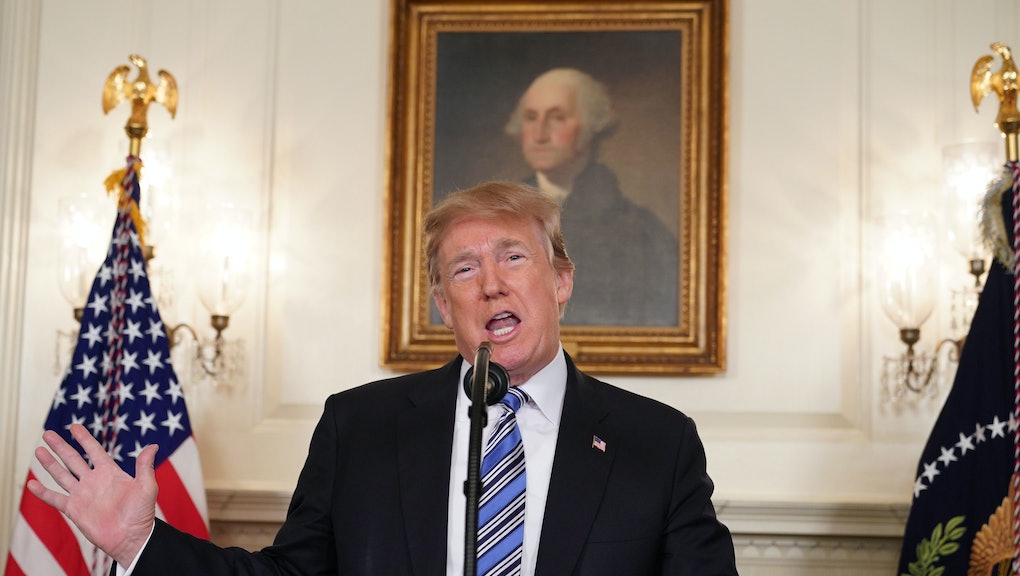 President Trump has treated us to another Sunday morning tweetstorm. Here’s what it all means.

Two days after 13 Russian nationals were indicted for their role in meddling in the 2016 election, President Donald Trump spent his Sunday giving begrudging acknowledgment of the Russians’ role in the 2016 election — even as he continued to hit back at his Democratic opponents.

“I never said Russia did not meddle in the election, I said ‘it may be Russia, or China or another country or group, or it may be a 400 pound genius sitting in bed and playing with his computer,’” Trump tweeted Sunday. “The Russian ‘hoax’ was that the Trump campaign colluded with Russia — it never did!”

Despite Trump’s Sunday claims, the president has previously stated that he didn’t believe Russia played a role in the election — a claim that the recent indictments, which laid out a detailed account of the Russians’ attempt to “sow discord in the U.S. political system” by electing Trump, now refutes. In November, Trump told reporters that he “really believed” Russian President Vladimir Putin when the Russian leader told Trump that his country did not meddle in the election.

Though the indictment did not allege any direct collusion between Russia and the Trump campaign, it did hint that Americans played a role in the election meddling, including “unwitting individuals associated with the Trump Campaign” who communicated with Russian officials posing as Americans.

“If it was the GOAL of Russia to create discord, disruption and chaos within the U.S. then, with all of the Committee Hearings, Investigations and Party hatred, they have succeeded beyond their wildest dreams,” Trump added on Twitter Sunday. “They are laughing their asses off in Moscow. Get smart America!”

The president’s Sunday tweets also continued to hit back at Democrats and former President Barack Obama. In addition to blaming Obama for sending $1.7 billion in cash to Iran — a 2016 legal settlement related to the sale of military equipment — the president pointed to a poll by Republican pollster John McLaughlin that puts Republicans ahead in the Generic Congressional Ballot for the 2018 midterm elections.

“Great Pollster John McLaughlin now has the GOP up in the Generic Congressional Ballot. Big gain over last 4 weeks. I guess people are loving the big Tax Cuts given them by the Republicans, the Cuts the Dems want to take away. We need more Republicans!” Trump tweeted.

McLaughlin, whom Trump employed as a pollster during the 2016 election and has a history of making incorrect predictions, published poll results for a Generic Ballot on Feb. 12 through company McLaughlin & Associates. The results, however, are not as Trump claims: 45% of poll respondents favored Democrats, as opposed to only 42% favoring Republicans. The February polling also included a job rating of the GOP majority in Congress, with 58% of respondents disapproving of the lawmakers’ job performance.

Trump’s Sunday tweets also praised Sen. Adam Schiff, the ranking Democrat on the Senate Intelligence Committee, for suggesting the Obama administration shared some responsibility for the election meddling by not taking stronger action against the Russians.

“Finally, Liddle’ Adam Schiff, the leakin’ monster of no control, is now blaming the Obama Administration for Russian meddling in the 2016 Election. He is finally right about something. Obama was President, knew of the threat, and did nothing. Thank you Adam!” Trump tweeted Sunday.

The president even dedicated a second tweet to Schiff, claiming that the Senator was now blaming Obama “as yet another excuse that the Democrats, lead by their fearless leader, Crooked Hillary Clinton, lost the 2016 election.

“But wasn’t I a great candidate?” Trump’s tweet continued.

Schiff hit back against Trump’s tweets in an appearance on CNN’s State of the Union Sunday, as he made clear that though Obama played a role, Trump also deserves blame for failing to implement Russian sanctions that Congress passed to hit back at the country for its election meddling.

“I think [the Obama administration] should’ve engaged in conversations about sanctions, but none of that is an excuse for this president to sit on his hands,” Schiff said Sunday, adding, “It is inexplicable that the President of the United States continues to sit on sanctions that Congress passed — that Congress wants enforced against Russia over this interference.”

The president’s Sunday tweets continued a Twitter rant that began Saturday evening, as Trump responded to a statement by national security adviser H.R. McMaster acknowledging the Russians’ role in the 2016 election. McMaster claimed the Friday indictments were “incontrovertible” evidence of the election meddling.

“General McMaster forgot to say that the results of the 2016 election were not impacted or changed by the Russians and that the only Collusion was between Russia and Crooked H, the DNC and the Dems. Remember the Dirty Dossier, Uranium, Speeches, Emails and the Podesta Company!” Trump tweeted Saturday.

Trump also addressed the recent mass shooting in Parkland, Florida, Saturday night. In addition to criticizing Democrats for not taking action on gun control when they had a Congressional majority under President Obama, Trump put the blame on the FBI for its inaction on responding to a tip about the shooter. The agency, Trump claimed, is “spending too much time trying to prove Russian collusion with the Trump campaign.”