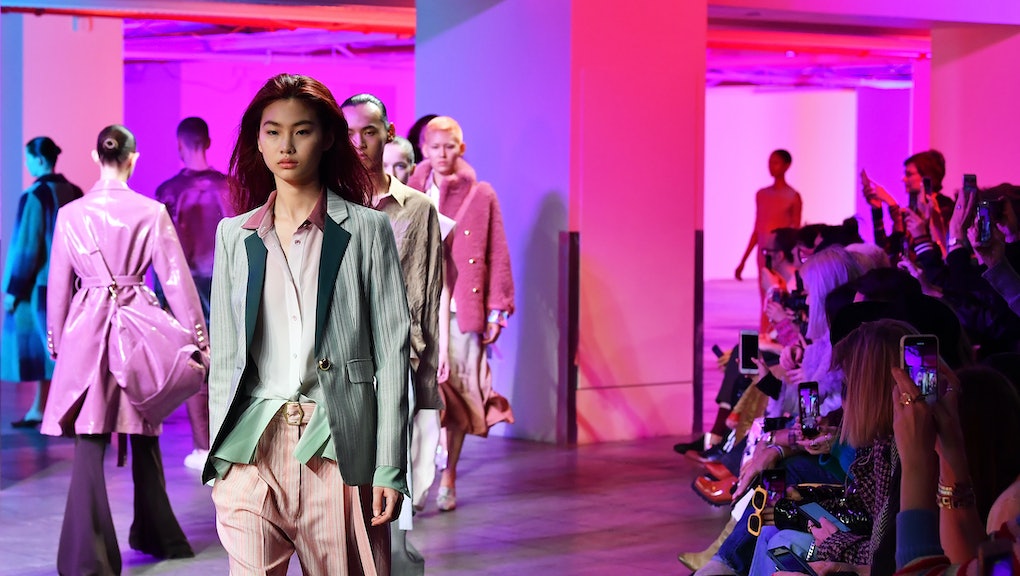 In spite of New York Fashion Week’s state of fluctuation, with major designers fleeing the massive, biannual fashion bash staged in Manhattan, there were actually designers this season who proved that it isn’t time to write off NYFW entirely just yet.

Thank goodness for them.

Pyer Moss designer Kerby Jean-Raymond isn’t new to this whole “making a fashion show more than just a fashion show” thing. In 2015, he showed a 15-minute video about police brutality during his slot at NYFW, after which he got death threats from the KKK.

After taking a short break from NYFW, Jean-Raymond came roaring back this season with a triumphant show that had not just spectacular fashion, but a gospel choir (organized by the great Raphael Saadiq) decked in all-white, singing anthems of black empowerment, like Kendrick Lamar’s “Alright.”

Rather than stage a traditional runway show, Telfar designer Telfar Clemens staged a concert with some of music’s most exciting talent: Kelela, Dev Hynes aka Blood Orange, Kelsey Lu, Ian Isiah and others, who all performed while wearing Telfar’s latest collection.

One word to describe Chromat’s show this season? Joy. A diverse set of models, including Ericka Hart, who is a breast cancer survivor and had a double mastectomy, the first plus-size supermodel Emme and the wonderful Carmen Carrera, walked out in strappy dresses, activewear and swimsuits constructed with neoprene, mesh, Chromat’s signature straps and accents that genuinely resembled pool noodles.

Also making an appearance on that runway were cans of Redbull and Flamin’ Hot Cheetos. Honestly, what more could you want?

Count Gypsy Sport as one of the funnest shows at NYFW to date. With a DIY-aesthetic and a bevy of models of different shapes, genders and ages, designer Rio Uribe affirmed his position in fashion as a truly fearless risk-taker and innovator.

Model Munroe Bergdorf, who made history as the first transgender spokesperson for L’Oréal U.K. last year and was then fired after denouncing white supremacy, for instance, walked alongside Desmond Is Amazing, the 10-year-old drag superstar. Name a more iconic duo. We’ll wait.

As always, there were the beautiful shows at New York Fashion Week overflowing with red carpet-ready gowns and exquisite tailoring and fabric — and then there was Sies Marjan.

On a level all its own, Sies Marjan, a relatively new label that launched in 2016, was (to us) the most beautiful show at NYFW. Cast in milkshake shades of light pink, purple and blue, with holographic ombre fabric and satin galore, every look made us wonder how we’ve survived so long without Marjan designer Sander Lak in our lives.

Get these clothes on a red carpet, stat.