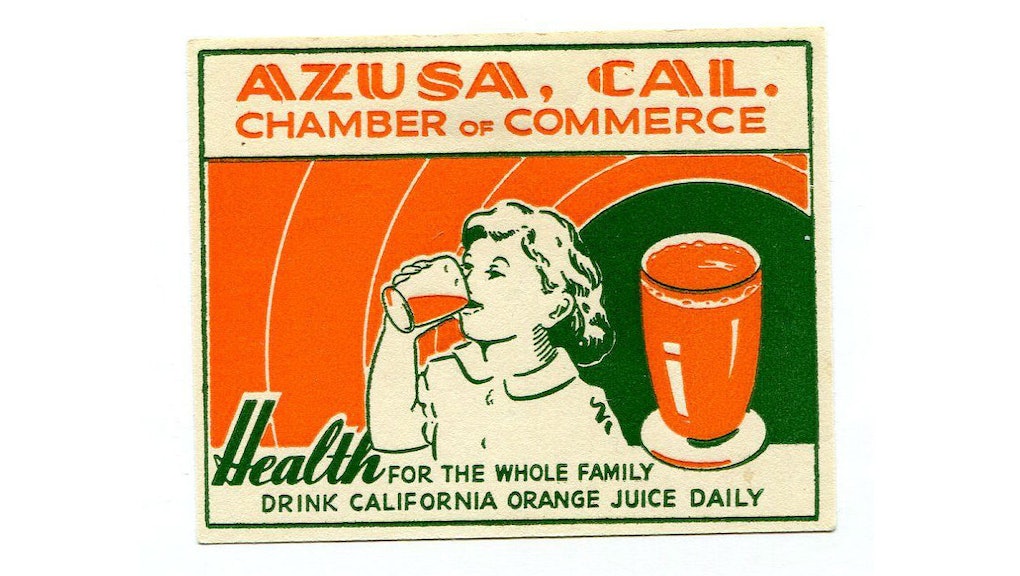 At first sniffle, my friend insists drinking orange juice will prevent a full-fledged cold from forming. She’s definitely wrong, but she’s not alone in her thinking — and I love her anyway.

It’s common advice that chugging liquid vitamin C — Emergen-C and orange juice are most popular in my social circles — will thwart sickly symptoms from ripening into a cold. While there’s no evidence a glass of Tropicana can keep the mucus at bay (some research suggests it could actually aggravate your sickness), the remedy is a much-repeated myth. For the first time in decades, however, grocers have seen a spike in orange juice sales in 2018, occurring in tandem with an especially turbulent flu season.

Where did the orange juice myth come from?

Drinking OJ for health is something people did in the early 20th century, around the same time men would endure electrical impotence cures.

Orange juice’s pervasive health halo dates back to the Industrial Revolution. From the 1880s through the 1920s, the U.S. experienced massive epidemics of illness and disease. “Explosive growth in cities led to problems in street cleaning and garbage removal and general sanitary issues,” Juliann Sivulka, professor of advertising and American studies at Waseda University in Tokyo, said in an interview. With crowded and filthy spaces came health crusaders, as Sivulka put it — and with the health crusaders came marketers seeking opportunity in this new environment.

According to Sivulka, Hopkins had the brilliant idea to dole out juice reamers. The tool taught consumers to enjoy oranges in a totally new and radical way — by drinking it. Juicing “meant that the average consumption per serving went from half an orange to about two or three oranges,” Jeff Cruikshank, co-author of The Man Who Sold America told HBR IdeaCast. “And [Sunkist] became the biggest producer of flatware in the world and the biggest producer of glass orange-juice squishers because it was such a runaway success. It’s probably his biggest commercial triumph.”

Even before the juice’s soaring success, the orange itself had earned a reputation of health.

“To eat an orange was to imbibe the spirit of the land, to be lifted momentarily from the city sidewalks of Chicago or Boston and placed in the paradise of California’s resplendent valleys.”

How oranges got their healthy reputation

Sunkist positioned the fruit through the lens of health to attract consumers. With their new urban lifestyles, “many reformers had worried that Americans, deprived of sunlight and the challenges of the frontier, might degenerate,” Douglas Cazaux Sackman wrote in his book Orange Empire: California and the Fruits of Eden. Oranges were accepted symbols of nature and could help city dwellers return to their roots.

“In the form of the orange, the curative effects of nature could travel to those suffering from the ‘rust’ of modern life,” Sackman wrote. “To eat an orange was to imbibe the spirit of the land, to be lifted momentarily from the city sidewalks of Chicago or Boston and placed in the paradise of California’s resplendent valleys.”

Orange juice soared in popularity in the 1920s, when pasteurization and trucking were introduced and people could drink the stuff from a can, Megan J. Elias wrote in her book, Food in the United States, 1890-1945.

Sunkist masterminds glommed on to new nutritional findings from food scientists that certain foods could be protective, even “[funding] research in nutritional science that yielded certain findings, which Sunkist in turn promoted, inflated and then defended by pointing to the fact that scientists had discovered them,” Sackman wrote. “This gave Sunkist just the thing it wanted — a new and mysterious presence in its product about which it could educate the public. Sunkist ingeniously presented educational narratives that simultaneously aroused fear of dietary deficiency and offered relief with its unique remedy.”

The rise of questionable claims

The surge in information around vitamins led Sunkist to declare some questionable — but irresistible — claims about its juice’s star vitamin, juicing the fear factor. “Sunkist claimed that because it had vitamin C, orange juice could prevent or cure ‘pneumonia, flu, or common colds,’” Elias wrote. “For Americans who had lived through the trauma of the 1918 influenza epidemic, this gave the juice special appeal.”

That the false notion of OJ curing the common cold has survived for nearly 100 years teaches us one thing: The power of marketing is lasting and strong. Since Sunkist set the foundation, several other brands have piggybacked off its strategy: A 1952 Minute Maid advertisement, for example, told consumers to “drink Minute Maid for better health” and claimed frozen OJ was more healthful than home-squeezed versions (sounds fishy, no?).

But when it comes down to it, there’s not enough consistent evidence to show that vitamin C — let alone orange juice — can prevent a cold. “At the end of the day, a cold is a virus, it has to run its course, and treatment is for symptoms only,” Randy Wexler, assistant professor of family medicine at the Ohio State University College of Medicine, told Everyday Health.

As for my friend who is dead-set on prescribing orange juice, I’m going to show her this 1,000-word screed. She probably won’t believe me. Old habits die hard, and the association of health and orange juice isn’t going anywhere. “It’s amazing,” Sivulka said about the marketing tactics for orange juice. “It’s selling a habit — the brilliant marketers were finding a need and filling it.”

This article was originally published on March 1, 2018