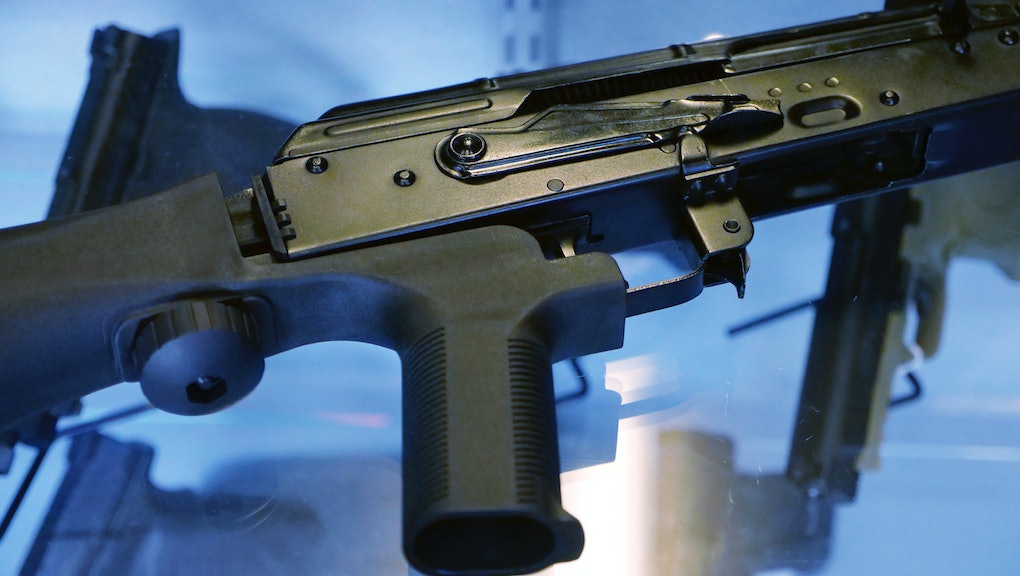 On Tuesday, less than a week after 17 people were killed during a mass shooting at a high school in Parkland, Florida, President Donald Trump ordered the Department of Justice to propose a regulation banning bump stocks and similar devices.

Bump stocks are devices attached to semi-automatic rifles that replace a gun’s stock with a sliding stock and trigger guard, mimicking the functionality of fully automatic weapons. The shooter holds the pistol grip with one hand and pushes forward on the gun’s barrel with the other to fire the gun. After the gun is fired, the recoil action moves the gun back and forth, “bumping” the shooter’s finger against the trigger at a high speed.

“The stock has no automatically functioning mechanical parts or springs and performs no automatic mechanical function when installed,” a 2010 letter from the Bureau of Alcohol, Tobacco, Firearms and Explosives to bump stock manufacturer Slide Fire Solutions noted. “Accordingly, we find that the ‘bump stock’ is a firearm part and is not regulated as a firearm.”

The devices first gained widespread attention following the October 2017 mass shooting in Las Vegas, as 12 of the devices were found in the hotel room of suspected gunman Stephen Paddock. Since that deadly event, state lawmakers have taken on the issue while the federal government has lagged behind — and it’s unclear whether Trump’s announcement this week will fix that.

In the wake of the Las Vegas shooting, Democrats and other lawmakers have pushed for a legislative ban on bump stocks. In October, Sen. Dianne Feinstein introduced a bill banning the devices and Rep. Carlos Curbelo introduced a similar ban in the House.

A separate House bill, also introduced in October, would regulate bump stocks, requiring bump stock owners to register with the ATF and undergo a background check.

All three federal bills have remained stagnant, making no progress since they were introduced. Instead, states and cities have actually taken action on bump stocks. Massachusetts and New Jersey both passed legislation banning bump stocks in November and January, respectively, following the lead of California and New York, who had both banned the devices prior to the Las Vegas shooting. Columbia, South Carolina, became the first city to ban the devices in December, with Denver later following suit in January. At least 15 additional states are currently considering legislation banning the devices.

“The states are actually really leading the way, and they are the true leaders on this issue while Congress continues to not act to ban these devices,” Robin Lloyd, government affairs director for gun-control group Giffords, told the Washington Post.

Bump stocks and the ATF

Instead of taking legislative action, many Republican lawmakers, along with the National Rifle Association, advocated regulating the devices through the ATF, a division of the Department of Justice, in the immediate aftermath of the Las Vegas shooting. House Speaker Paul Ryan called regulatory action by the ATF the “smartest, quickest fix,” while a group of nine GOP senators sent a letter to the ATF asking them to review the agency’s regulations allowing the sale of the devices.

“If we could legislate morality, we would have done it long ago,” NRA executive vice president Wayne LaPierre said on CBS’s Face the Nation, as quoted by the Washington Post. “I think you want to tell ATF to do its job. It’s an interpretive issue, and they need to get the job done.”

Amid Congress’s stalled legislation, the ATF is moving toward potentially taking action on bump stocks. The agency filed an advance notice of proposed rulemaking in December, which called for public comments as the first step in a process of re-examining whether the agency can interpret existing laws on automatic firearms to include bump stocks. The public comment period ended on Jan. 25, and the agency received more than 36,000 comments.

The proposal noted that if the definition of machine gun is interpreted to include certain bump stock devices, “the ATF would then have a basis to re-examine its prior classification and rulings.”

Trump’s bump stock memo on Tuesday simply continued this process, acknowledging the ongoing review, and directing the Department of Justice to dedicate resources to complete the review of the comments received and “propose for notice and comment a rule banning all devices that turn legal weapons into machine guns.”

However, putting this responsibility on the ATF may be a way for the NRA and GOP to avoid taking real action on regulating bump stocks, as the ATF has previously determined bump stocks cannot be regulated under existing laws. The ATF sent a letter to Curbelo asserting its inability to take action in October, in which it described the devices as “engineered to avoid regulation under federal law.”

“These accessories DO NOT cause the firearm to shoot more than one shot by the single function of a trigger pull. The notion that ATF chose not to regulate an item it had the authority to regulate is false. The law is very clear and it does not currently allow ATF to regulate such accessories,” ATF president Michael R. Bouchard wrote in October. “ATF makes rulings based on the statutory authority contained in law and cannot change the law to add new accessories that do not fall within the scope of existing law.”

The New York Times reported in December that despite the review, ATF officials have privately expressed that they do not believe the agency has the power to regulate bump stocks.

Feinstein acknowledged this problem in the wake of Trump’s Tuesday announcement, noting in a statement that the ATF “currently lacks authority under the law to ban bump stocks.”

“If ATF tries to ban these devices after admitting repeatedly that it lacks the authority to do so, that process could be tied up in court for years, and that would mean bump stocks would continue to be sold,” Feinstein said.

“Legislation is the only answer,” she said.