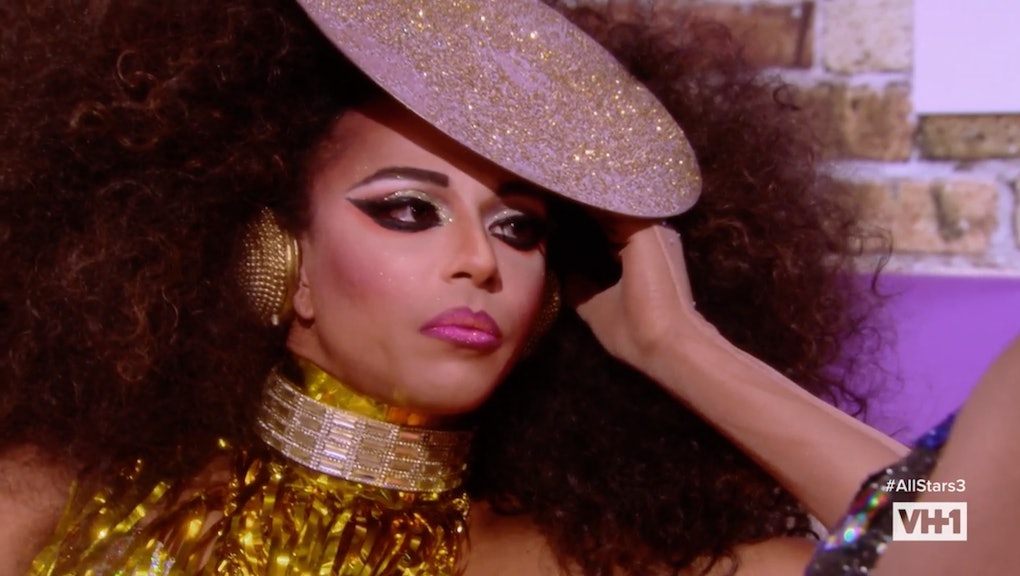 Episode five was almost entirely devoid of shocking twists, but it was an important, fulcrum-shifting episode that proved the other girls — not just BenDeLaCreme and Shangela — can bring it. Finally, for the first time since the season began, neither Ben nor Shangela landed in the top two. Hot off her near elimination in episode four, Trixie — along with BeBe, who has consistently been in the middle of the pack — knocked them off their thrones.

In the first of the two loosely Andy Warhol-themed maxi challenges this week, the girls had to design their very own body-sized soup cans and wear them down the runway. Like the product design challenge in All Stars 2, this was a challenge that was really designed to see whether the queens knew how to identify and market their brands in merchandise.

Unsurprisingly, Trixie — a queen who has enjoyed massive success outside the confines of Drag Race — knocked this one out of the park. Her soup can, called Pep/Abysmal, was adorned with a demonic image of herself, placed in a technicolor, pastoral plain. Along the top of the can was a banner warning consumers that her soup “may cause death.” It was a perfect fit for her whole funhouse-mirror Dolly Parton vibe.

Really, everyone did a fine job with this challenge — except for Aja, who decided her defining quality as a drag queen was sweetness. Yes, the girl who death-dropped from a three-foot-tall box in the season premiere thought people like her because she’s nice. She also named her soup “Sugar Tits,” which, unlike Shangela’s “Halleloops,” is absolutely is not a soup pun at all and doesn’t really make sense — neither grammatically, nor for Aja’s brand as a drag queen.

Combined with Aja’s mess-up in the runway challenge in which the queens had to design a ’70s-inspired Studio 54 look, this landed Aja in the bottom two. Unlike the other gals, the judges thought Aja’s aesthetic lacked a historical awareness, with its blending of multiple styles from both the ‘60s and ‘70s.

The other queen who landed in the bottom two this week was Shangela, whose infamous inability to sew her own looks promptly ended her near-universal domination this season thus far. In fact, the dynamic between her and Trixie was completely flipped this week when Trixie oh-so-graciously helped Shangela sew her gown. Unfortunately, even Trixie’s assistance couldn’t rescue Shangela’s Studio 54 look, which was essentially just a fringe-y gold frock with records glued to the front. Using another record as a beret-style hat and pairing it with glittery headphones was clever, but the dress itself looked decidedly homemade.

Here, however, is where BeBe distinguished herself and confidently trounced the competition. Her gown was absolutely stunning. Not only was the dress itself — with its fitted bodice and fringed skirt — incredibly sophisticated, but the way she accessorized it really elevated her look to the next level. She opted for a monochromatic look, offsetting the deep, glittery navy dress with brighter, matte blue necklaces and bracelets. It was this that helped her land in the top two alongside Trixie. Notably, however, BeBe did not acknowledge Aja’s help in sewing her gown during the critique, taking full credit for her outfit.

Ultimately, BeBe won the lip sync against Trixie and sent Aja home, but it’s worth noting how thoroughly Aja turned herself around this season. Going into her native season nine, Aja’s incredibly precise lip syncs, killer dancing skills and Instagram know-how had her pegged as an early frontrunner. But once she got there, it quickly became clear she wasn’t going to last too long. (Anyone else remember that 9021-HO acting challenge? Yikes.)

But just a few short months after petering out on season nine, Aja came back for All Stars 3 with far more confidence and consistently delivered each episode’s most compelling runway looks, including a completely stunning revamp of her season nine princess “Disastah” look. And that’s to say nothing, of course, of her vastly improved makeup game, which was a consistent struggle for her in season nine. Those high-definition cameras were thoroughly unkind.

Really, Aja’s transformation from season nine to All Stars 3 is what All Stars is all about: second chances, coming back with an awareness of one’s own faults and making tangible improvements to your craft. Despite not winning the season overall, Aja nailed it.

In episode six, it looks like the eliminated queens will have a chance at getting their revenge on the remaining queens. Until next time.

Bonus art herstory lesson: The boxes on the runway were another ode to Warhol

Wondering why the runway was covered in RuPaul-branded boxes for hip pads? In keeping with the theme of the episode, they were an ode to another Warhol piece: “Brillo Boxes,” which were literally just screen-printed reproductions of the packaging for Brillo soap pads.

Like most of Warhol’s work, these boxes celebrated the twisted art of commercialism and poked fun at the strange, elitist hoop-jumping that fine artists perform to convince the art world their work is worth immortalizing. If a pile of mass-produced boxes can be considered art when they have Warhol’s touch of gold, what does that say about everything else in the gallery next to them?