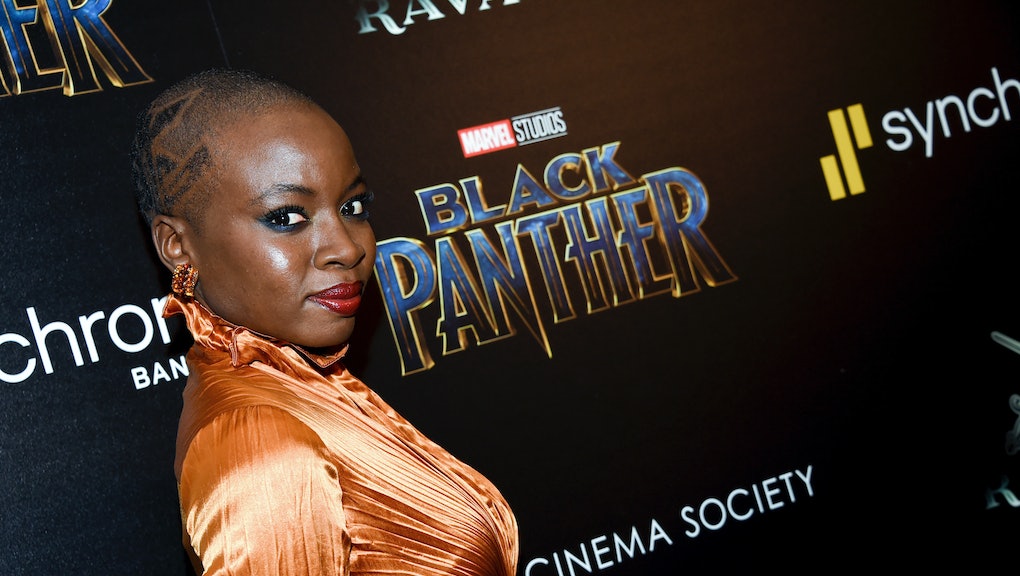 There are women in Hollywood who have never let us down on a red carpet. Lupita Nyong’o, Cate Blanchett, Ruth Negga, Rihanna, Tessa Thompson and Janelle Monáe are all in this elite group of women who give us — time and time again — exactly what we need to survive.

It’s like, we’ve got water, food, shelter and a new, thrilling picture of Thompson on a red carpet? Good, now we can breathe.

We’re pleased to announce this upper echelon of consistently expertly dressed women now has another member: Danai Gurira. The name may strike you as familiar because she most recently became one of the breakout stars of Black Panther, playing Okoye, the leader of the all-female Dora Milaje special forces. We won’t get into spoilers, but Okoye is everything.

It’s safe to say Gurira is everything outside of the Black Panther universe, too. On red carpets and at press events during the film’s promotional tour, Gurira has been the breakout star yet again. Still rocking that closely shaved head from the film — but now with designs shaved into it courtesy of hair genius Vernon Scott — Gurira has consistently served us fantastic fashion.

To pinpoint a few examples, take a look at Gurira at the world premiere of Black Panther (which had a red carpet that put all other red carpets to shame) in a black and hot-pink ruffled dress from Viktor & Rolf.

Then there was the South African premiere, to which Gurira wore a rather incredible blue column dress, which featured beaded detailing extending up the neck, from the Row.

Even standing alongside the luminescent Nyong’o, Gurira holds her own. To the Black Panther: Welcome to Wakanda event at New York Fashion Week, Gurira wore a Dion Lee dress the same color as Nyong’o’s and still held it down.

She also gave us one of the most stunning magazine covers in recent memory when she graced the cover of Rogue wearing a magnificent diamond earpiece.

For your viewing pleasure, here’s the video from that cover shoot:

What has made Gurira’s fashion so thrilling is the sense she truly has a good time with every red carpet she steps on. In her time as a major actress or playwright (she wrote Eclipsed, which once starred Nyong’o), Gurira has never walked a red carpet in a little black dress. She knows she can pull off something far more interesting than that.

Looking back to when Gurira was mainly known for her role in The Walking Dead, she never did us wrong. At a 2014 Golden Globes after-party, she arrived in a beautiful pink dress with lace detailing.

At a Comic-Con party that same year, she arrived in a dress covered in fruits and flowers.

At the American Music Awards in 2014, Gurira arrived in a bright green, printed one-shoulder dress that no one else could probably pull off.

To the 2016 Met Gala, with its theme of fashion and technology, she wore a glorious white gown by Giambattista Valli and sported tufts of silver in her hair.

It’s clear Gurira favors risks over dressing safely in strapless, satin dresses. A standout among her most recent outfits — and one of our favorites — is the gold Sies Marjan dress she wore to a New York screening of Black Panther straight from the NYFW runway.

It’s simply been a joy seeing more of Gurira out there, showing the rest of Hollywood what it looks like to have a joyous time on red carpets and at high-profile events while dressed in dresses that are anything but predictable.

Never one to play it safe, Gurira simply gets it.