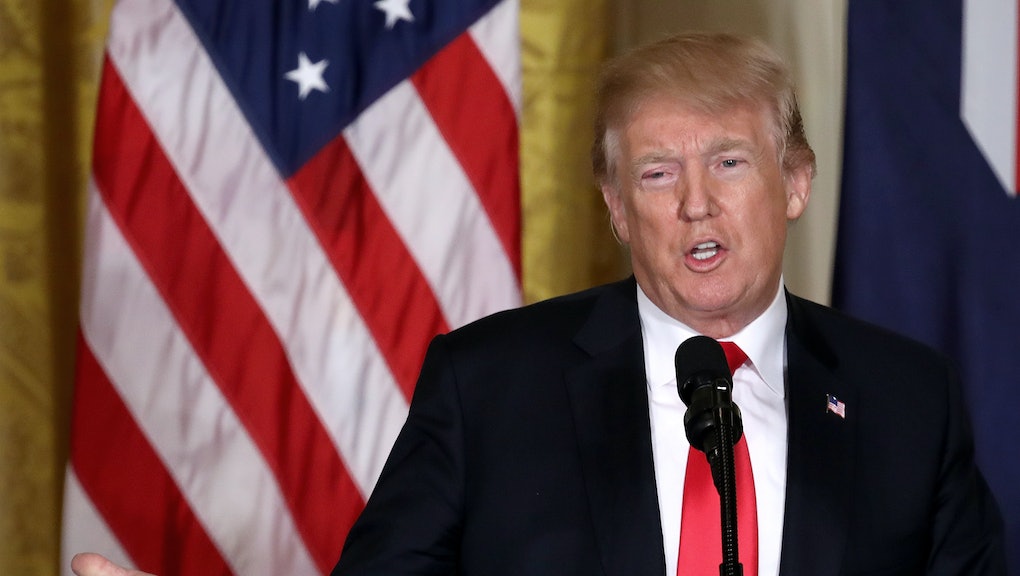 President Donald Trump hit back against the memo released Saturday by Democratic members of the House Intelligence Committee in an interview on Fox News Saturday night, telling host Jeanine Pirro that the document is “totally fraudulent.”

The drafting of the Democratic memo, spearheaded by Rep. Adam Schiff (D-Calif.), rebutted a previous report released by Republican members of the committee. The Republican memo criticized the FBI for its use of the Steele dossier in obtaining a Foreign Intelligence Surveillance Act warrant for Trump associate Carter Page. Calling the Democratic memo “a nothing” and “a very bad document” for Democrats, Trump claimed Saturday that the memo “really verifies” the initial version released by Rep. Devin Nunes (R-Mass.).

“A lot of bad things happened on the other side, not on this side, but on the other side,” Trump said Saturday about the Democratic memo. “What they did is really fraudulent, and somebody should be looking into that. And by somebody, I’m talking about you know who.”

The president’s comments echoed tweets Trump published Saturday about the memo, in which he called the document a “total political and legal bust” and misquoted Fox News to claim that Schiff “omitted and distorted key facts.”

Though the president emphasized the need to “bring the country together” during his Saturday Fox interview, Trump couldn’t help but attack his Democratic opponents, including Schiff, whom Trump called a “bad guy.”

“All you do is see Adam Schiff, he has a meeting, he leaves the meeting, calls up reporters and all of a sudden they have news, you are not supposed to do that,” Trump said. “It’s probably illegal to do it. He’ll have a committee meeting and leak all sorts of information. He’s a bad guy.”

Trump also criticized former president Barack Obama for being in power while the alleged meddling was taking place. He also used the interview to take aim at former opponent Hillary Clinton.

“I don’t want to sound braggadocious [sic], I was a far better candidate. [Clinton] was not a good candidate, she went to the wrong states,” Trump continued. “And you know, frankly that’s what it was all about. There was nothing to do with Russians.”

The president, however, had nothing but praise for Nunes and his role in crafting the initial memo, predicting “someday [Nunes is] going to be honored for his service and what he’s done. He’s been very, very brave in the face of a lot of obstacles. What he found out is incredible, I give him tremendous credit”

Much of what Nunes “found out” and published in the initial memo has now been debunked by the Democrats’ response. The Nunes memo accuses Steele, whose dossier included salacious claims about Trump that remain unverified, of improper conduct and criticizes the FBI for making “extensive” use of the dossier in its FISA application to surveil Page. The memo also attacked the FBI for failing to disclose the “political motivations” behind the Democrat-funded dossier to the court that authorized the FISA warrant.

According to the Democratic memo, however, the FISA application made “very narrow use of” Steele’s information, specifically focusing on Page’s July 2016 visit to Moscow while employed by the Trump campaign. Page ended his association with the campaign prior to the FISA warrant, and the warrant was not used to spy on the Trump campaign, the memo asserts.

The memo also noted that the FISA warrant against Page included information from independent sources that corroborated Steele’s reporting. Though many of the dossier’s claims remain unverified, some have been publicly corroborated since the dossier’s release.

Additionally, the Democratic memo claims that the Department of Justice informed the court about Steele’s “background, credibility, and potential bias.” The court was told that “Steele was hired by politically motivated U.S. persons and entities and that his research appeared intended for use ‘to discredit’ Trump’s campaign,” the memo noted.

Though Trump and other Republicans have often used the dossier’s largely uncorroborated nature and Democrat funding to discredit the Russia investigation, Democrats also emphasized in the memo that the Steele dossier “played no role” in the FBI’s decision to open its investigation into potential collusion between Russia and the Trump campaign. The FBI’s investigation began in July 2016 based on information unrelated to the Steele dossier, according to the memo, and the agency did not receive the dossier until mid-September. Page was first interviewed by the FBI about his potential Russian ties in March 2016, the memo noted.

The investigation, as the Nunes memo also reported, was instead launched based on information from Trump campaign staffer George Papadopoulos.

“The FBI would have continued its investigation ... even if it had never received information from Steele, never applied for a FISA warrant against Page, or if the FISC had rejected the application,” the Democratic memo reads.

In an appearance Sunday on CNN’s State of the Union, Schiff responded to Trump’s criticism and asserted the importance of the memo’s release.

“I’m not surprised the president doesn’t like it, I’m not surprised that frankly, the White House tried to bury this memo response as long as they could, but it’s important for the public to see the facts that the FBI acted appropriately in seeking a warrant against Carter Page. They’re not part of some ‘deep state,’ as the president apparently would like the public to believe,” Schiff said.