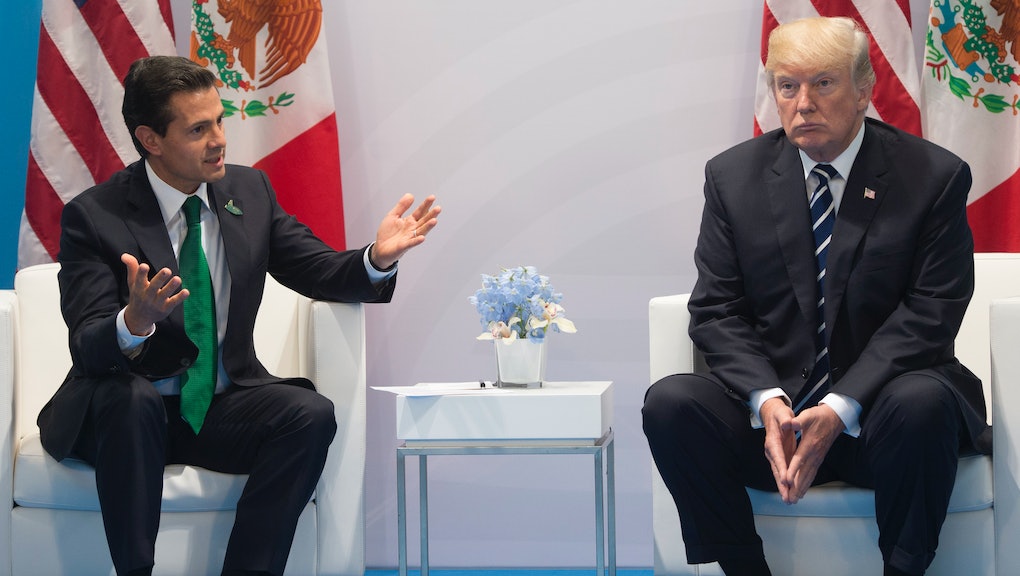 According to sources cited by the Post, the 50-minute phone call between the two leaders was largely dominated by talk about the wall, and Trump was unwilling to publicly affirm Peña Nieto’s ongoing position that Mexico will not fund the wall as Trump has claimed.

Officials familiar with the call told the Post that Trump became “frustrated and exasperated” during the conversation, in which neither man would compromise their position on the wall.

The phone call reportedly followed a meeting at the White House between Mexican officials and members of the Trump administration to work out Peña Nieto’s planned trip, which was slated to take place in February or March. The two sides agreed that Trump would not bring up his desire for Mexico to fund the wall during the visit — a plan that Trump then refused to commit to during his call with Peña Nieto.

Peña Nieto reportedly finds Trump’s calls for Mexico to fund the border wall embarrassing and faces pressure not to give into Trump’s wishes as he prepares to seek re-election in July, the Post reported. The two leaders’ opposing positions on the wall has damaged their professional relationship, although their administrations have negotiated on trade and other issues.

“The problem is that President Trump has painted himself, President Peña Nieto and the bilateral relationship into a corner,” Arturo Sarukhan, a former Mexican ambassador to the United States, told the Post. “Even from the get-go, the idea of Mexico paying for the wall was never going to fly. His relationship with Mexico isn’t strategically driven. It’s not even business; it’s personal, driven by motivations and triggers, and that’s a huge problem. It could end up with the U.S. asking itself, ‘Who lost Mexico?’”

This marks the second time during Trump’s presidency that Peña Nieto has canceled his White House plans over the two leaders’ disagreement over the wall. In January 2017, Peña Nieto canceled another planned trip to the White House after a Jan. 28, 2017 phone call with Trump, in which the U.S. president asked Peña Nieto to say the two leaders would “work it out” when asked about the border wall funding.

“The fact is we are both in a little bit of a political bind because I have to have Mexico pay for the wall – I have to,” Trump told Peña Nieto during the 2017 call, according to a transcript published by the Post.

“You and I are both at a point now where we are both saying we are not to pay for the wall,” Trump added. “We cannot say that anymore because if you are going to say that Mexico is not going to pay for the wall, then I do not want to meet with you guys anymore because I cannot live with that. ... Believe it or not, this is the least important thing that we are talking about, but politically this might be the most important talk about.”

Peña Nieto and Trump have met at the G20 summit in Germany in July 2017 as well as during a visit Trump made to Mexico City during his presidential campaign. Officials cited by the Post suggest Peña Nieto may try again to visit the White House in the spring, and the two leaders may meet during the Summit of the Americas in Lima, Peru, in April.

Trump has made the border wall between U.S. and Mexico a cornerstone of his presidency since he first announced his candidacy in June 2015, claiming in a speech that Mexico was bringing their “worst people” to the U.S. and promising a “great, great wall on our southern border, and I will have Mexico pay for that wall.”

Progress on Trump’s border wall has lagged during the first year of his presidency, though the president still remains committed to the proposed plan. Most recently, Trump told supporters at the Conservative Political Action Conference Friday, “You’re getting the wall. Don’t worry.”

Trump added that every time someone says the president “really doesn’t want the wall,” it gets “10 feet higher.”

Peña Nieto, meanwhile, has been just as clear in his opposition to the wall.

“I am dismayed by and condemn the decision made by the United States to continue building a wall that for many years, far from uniting us, has divided us,” Peña Nieto said in a January 2017 television address, as quoted in English by the Los Angeles Times. “Mexico does not believe in walls. I have said it again and again: Mexico will not pay for any wall.”