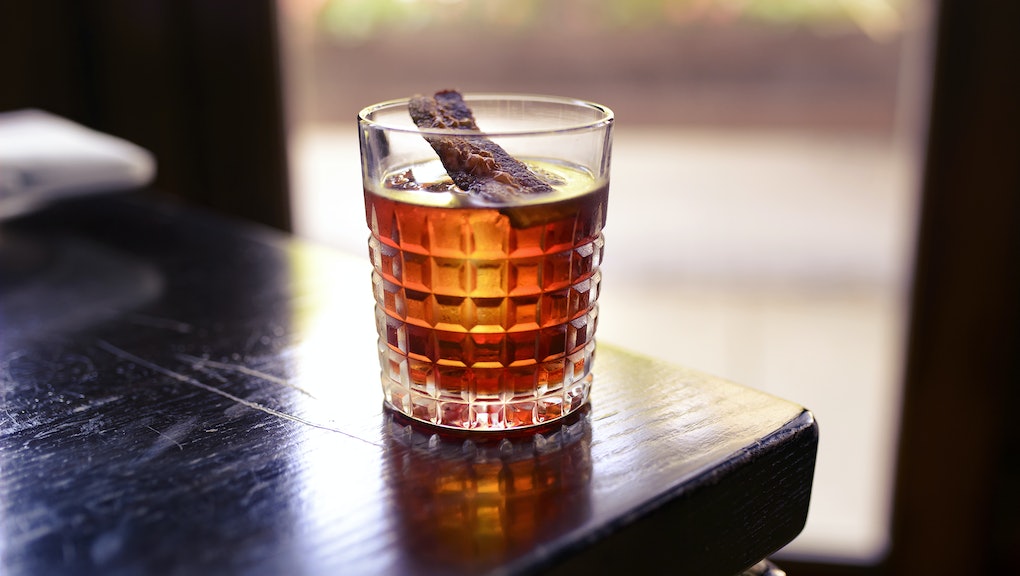 Whenever the good old boy, a bloody mary topped with a girthy slab of bacon, emerges from the bar at The Wren in New York City, customers turn to look. The brunch cocktail is made with bacon-infused Jim Beam bourbon, brown sugar, HP Sauce, tomato and smoked salt, and garnished with that thick-cut bacon. Those customers usually order one as well, triggering a domino effect.

Combining meat and booze is nothing new: In 2007, the revered, former PDT mixologist Don Lee concocted Benton’s old fashioned for the bar, which many cite as the first introduction of fat washing cocktails. Made with Benton’s bacon fat-infused bourbon, maple syrup, angostura bitters and an orange peel garnish, the drink gets a salty, savory element from the meat, which can also help cut the bite of the liquor.

In 2018, hard times call for harder alcohol. Drinking a meat-meets-booze medley is a little act of resistance. For one thing, according to multiple bartenders interviewed for this story, women are ordering them just as often as men. Meat has historically been marketed as a man’s food, and whiskey a man’s drink, but that’s evolving — a lot.

Krissy Harris, The Wren’s former bar director and the inventor of the good old boy, attributes whiskey’s widening mass appeal to Mad Men and a subculture that’s rebelling against the ubiquitous wellness lifestyle trend overtaking New York City. “There’s a huge push to the health conscious, the Sweetgreens, these pretty places that have health foods,” she said in an interview. “If anything, [whiskey and bacon drinks] appeal to a countermarket. These people are going against the majority. They’re like, ‘I’m not gonna count my calories, I’m going to have a bucket of fries and a bacon bloody mary for breakfast.”

The bull clammer, served for brunch at Astoria’s Sweet Afton, is a little less aggressive looking. With dill-infused vodka, beef au jus, clam juice, Tabasco, Worcestershire, lemon, celery and smoked salt, the bloody mary riff is made for someone who can say, “I’m adventurous and I’m willing to take a bit of a risk,” Mike Di Tota, the mixologist behind the drink, said in an interview. Like the good old boy, the bull clammer is eye-catching when it’s spotted in the wild. “People just aren’t willing to take the risk for order it for themselves, but as soon as their friend has the cajones to do so, the whole table goes for it,” said Di Tota.

These kind of drinks are for hedonists, Harris said. For the drinkers — whatever their typical lifestyle might be — a meat-infused drink is a form of rebellion, even if it’s just for a few hours during brunch.

Meaty cocktails aren’t just for hungover mornings. At Blue Dog in Manhattan’s Theatre District, Rosie the Riveter, a combination of duck fat-washed scotch, dry vermouth, green peppercorn syrup and rose water is one of dinnertime’s top-selling cocktails. Despite the feminist name, bar manager Aleksandra Putnam said that men and women order it at the same rate. “People are much more interested in the process of making it and they want to try it for themselves.”