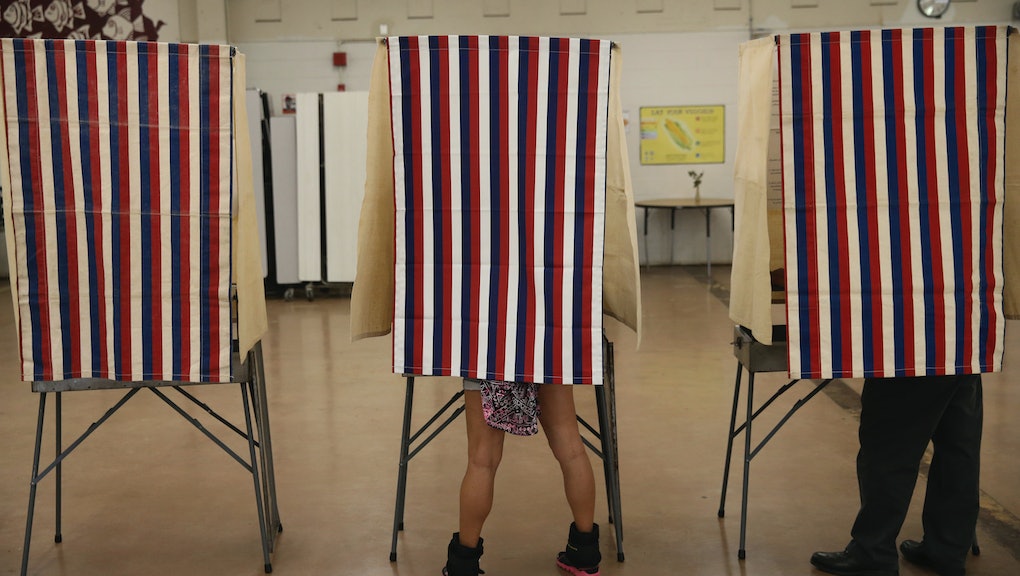 In a small dining area at New York’s Washington Square Hotel on Tuesday, a group of third-party centrist candidates met together to try and gin up support for their cause in 2018.

While the mood among the candidates was optimistic, the conversations in the room felt largely detached from the broader political conversation going on. The bromides of centrist thought — which center around a belief that two equally culpable political factions are guilty of putting party dogma ahead of sensible compromise — have felt stale to many observers for a while.

In the divisive era of Trump, they may come off as almost completely anachronistic.

“I think on even our country’s most difficult issues there’s a lot of common ground,” Neal Simon, an independent candidate for U.S. Senate in Maryland said in an interview. “I think most of America feels that way and they’re desperate for leaders to compromise and bring the country together.”

Simon went on to explain how issues like America’s broken immigration system could be solved by finding compromise around a package of reforms that include a pathway to citizenship and increased border security to appease both right and left coalitions.

Lost in that analysis, however, was the fact that similar proposals to the one Simon described have been floated throughout the Bush and Obama administrations, and were tabled, or defeated. The election of Donald Trump eventually laid bare the fact that the divide over immigration is not being driven by policy differences, but by a fundamental difference between those who embrace a changing America and those who seek to preserve its white majority.

When a group of Senators put forward yet another proposal mirroring Simon’s vision of bipartisan immigration reform in January, it was shot down by the Trump administration in favor of a non-starter proposal to radically change our legal immigration system in ways that would keep America whiter, longer.

In October, the Atlantic’s Molly Ball wrote an in-depth report on the post-2016 soul-searching happening at another centrist organization, the D.C.-based policy shop Third Way. As members of the centrist think-tank toured the country after the election, they were surprised to learn that the vast majority of voters were not pining for the kind of center-left compromise politics the group had made its raison d’être.

Instead, Third Way organizers found that the folks in so-called “real America” red states were as divided as their counterparts in Washington and, at times, showed even greater commitment to their ideological coalition than lawmakers did. The report suggested that newly activated voters plan to make the next election a referendum on the Trump administration and the Republican party, while staunch conservatives plan to rally around their president.

Perhaps this prevailing national sentiment is why the group that gathered in New York this week decided recently to change its name from the overtly pro-center title “The Centrist Project,” to the more anodyne “Unite America.”

There is one key difference between United America and it’s compromise-loving allies at Third Way, and it may be what makes their movement truly valuable to the broader group of people seeking change in Washington. Unlike Third Way, which seeks centrist change from within the two-party system, Unite America is working outside the two-party system by promoting third-party centrist candidates.

Typically, third-party movements are panned across the political spectrum for their propensity to take votes away from otherwise viable candidates, and allow another candidate to win with fewer than the majority of votes. The phenomenon, known as “the spoiler effect,” has been disregarded by major third-party agitators like the Green Party’s Jill Stein and Libertarian Gary Johnson who insist, with little evidence, that a plurality of voters will someday break from the two-party system and support their candidacies.

But, in true centrist fashion, the candidates of Unite America have not let themselves rely entirely on that kind of idealistic thinking, and instead promote pragmatic electoral reforms that could open up the American political system to candidates of all ideological stripes.

“We need a lot of electoral reforms,” Craig O’Dear, independent candidate for the U.S. Senate seat in Missouri, said in an interview at the event. “I think open primaries and ranked-choice voting are both ideas that should be given very close consideration, and they’ve been applied in places and we can study them and see the effect they’ve had.”

Four of the centrist candidates running for national or statewide office at the event all expressed support for a panoply of institutional reforms, from ending gerrymandering to filibuster reform. But the most notable and unorthodox policy they expressed uniform support for was the concept of ranked-choice voting.

“I supported the ranked-choice voting initiative [in Maine],” Maine Treasurer Terry Hayes, who’s running to be the state’s third independent governor, said. “It provides more voter input on the decisions about who the leaders are going to be, and it also has a tendency to reduce the negative campaigning during the campaign season.”

Ranked-choice voting is a system where, instead of voting for a single candidate, voters can “rank” their choices in order of preference. In ranked-choice voting, if an election has more than two candidates and no candidate gets an outright majority — greater than 50% — in the initial vote, then the candidate with the least support is removed from the count, and any voter who chose that candidate has their vote reapportioned to their second “choice.” The process continues until one candidate has the support of more than half of the voters, ensuring that no one is ever elected with a minority of voter support.

“We look at it and say, ‘Wouldn’t it make sense to have the opportunity to vote for your first choice, your second choice, your third choice,’” Hayes said. “You know we do that everyplace else in our lives. Why can’t we do that at the ballot box?”

The appeal of ranked-choice voting goes beyond allowing centrist candidates to avoid spoiling an election. In the beginning of the 2016 race, most Republican primary voters supported candidates other than Trump, with the current president frequently polling below 50% support in his own party.

Had the primary relied on a ranked-choice voting system, supporters of candidates like Jeb Bush and Sen. Marco Rubio would not have had to split their votes, but could have instead ranked their priorities such that a non-Trump candidate would have prevailed with the most votes, once the lowest contenders were removed from the count.

Had Stein and Johnson voters in swing states like Florida and Pennsylvania been able to rank their voting choices, Hillary Clinton may have been able to pick up enough support to flip a few more states and possibly even win the election.

A ranked-choice voting system could also allow newer groups like Democratic Socialists of America, or never-Trump Republicans, to run their own candidates without fear of tanking their ideological cohorts in the major parties.

In California, lawmakers took a different approach to trying to break through the two-party system by adopting a nonpartisan primary system sometimes referred to as a “jungle primary.” There, candidates of both parties compete in the same primary, and the top two vote-getters move on to a run-off election, where candidates can compete for a majority of votes. While the California system does prevent any candidate from taking office with less than a majority of the vote, its limits are starting to be tested in 2018.

Take California’s 49th congressional district, a swing district where voters split relatively evenly along Democratic and Republican lines. In the 2018 primary, a large field of Democratic candidates have already managed to split the vote so broadly among themselves that some Democrats fear the two Republicans in the race will end up with the highest vote totals, leading to a Republican vs. Republican run-off in the general election.

Ranked-choice voting would prevent any such outcome, by ensuring that the votes for low-ranking candidates are reallocated to voters’ second and third choices, such that no candidate can ever win a primary or general election race with less than a majority of voters’ support.

If centrists like the ones at Unite America want to become viable candidates in the future, they’ll likely have to lean in to their support for electoral reforms like ranked-choice voting. That means they’ll also have to reckon with the fact that their allies in the electorate are not necessarily centrist voters pining for compromise, but some of the most ideological voters on both sides of the spectrum who are also fed up with the two-party system.

That could make for an uneasy coalition, but who better to make it happen than a group who believe uniting disparate factions is their reason for existing in the first place?