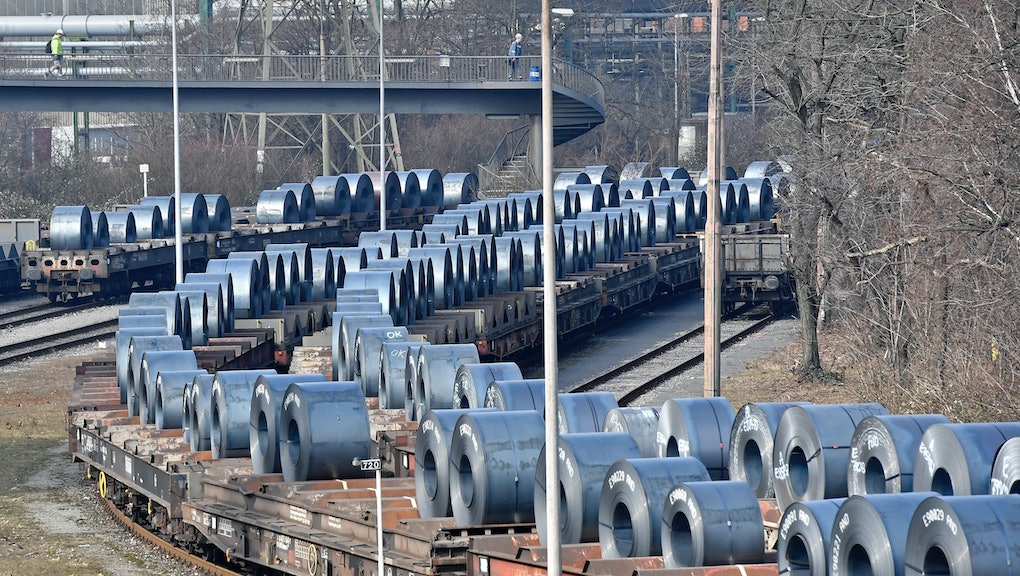 Trump announced the tariffs over the objections of much of his national security team, including national security adviser H.R. McMaster and Sec. of State Rex Tillerson, Politico noted, as well as economic adviser Gary Cohn, who may be eyeing an exit from the White House over the decision. Among those backing the tariff in the White House are trade adviser Peter Navarro and Commerce Secretary Wilbur Ross.

The tariffs were also rebuffed by many lawmakers within Trump’s own party. Republicans raising objections to the proposed tariffs include House Speaker Paul Ryan (R-Wis.), who said he hoped the president would “consider the unintended consequences of this idea and look at other approaches before moving forward,” the Associated Press reported.

Sen. Orrin Hatch (R-Utah) called the tariffs “a tax hike the American people don’t need and can’t afford,” NPR reported, adding that he “encourage[s] the president to carefully consider all of the implications of raising the cost of steel and aluminum on American manufacturers and consumers.”

To justify the tariff, Trump is using Section 232 of the Trade Expansion Act of 1962, which allows the president to impose unlimited tariffs and place restrictions on imports on “national security grounds.” The move comes after an investigation by the Department of Commerce concluded the tariffs would be justified on such grounds, as the U.S. military demands a “healthy industrial base,” according to USA Today.

The president doubled down on his decision to impose the tariff on Twitter Friday, claiming that “trade wars are good, and easy to win.”

“We must protect our country and our workers,” Trump later added. “Our steel industry is in bad shape. IF YOU DON’T HAVE STEEL, YOU DON’T HAVE A COUNTRY!”

Global reactions to the tariff

Though it’s currently unclear if any countries will be exempted from the tariff, Trump’s announcement was quickly condemned by governments around the world Friday. The top three countries exporting steel to the U.S. are Canada, Brazil and South Korea, while aluminum exports are primarily done through Canada, Russia and the United Arab Emirates, CNBC noted.

Canada vowed to take “responsive measures” over the tariffs. In a statement, Canadian Foreign Minister Chrystia Freeland declared it is “entirely inappropriate to view any trade with Canada as a national security threat to the United States.”

“Should restrictions be imposed on Canadian steel and aluminum products, Canada will take responsive measures to defend its trade interests and workers,” Freeland continued, as quoted by the Hill.

“We will not sit idly while our industry is hit with unfair measures that put thousands of European jobs at risk,” Juncker said.

China also expressed “grave concern” over the tariff Friday, the Guardian reported. Though the country is not among the top exporters of steel to the U.S., the country’s Ministry of Commerce also warned that the country will “take measures to safeguard its interests” if Chinese trade interests are affected by Trump’s tariffs, according to the Economic Times.

Possible impacts of the tariff

The fallout over Trump’s proposed tariffs has already had an effect on the global stock markets, and as the global reaction suggests, the tariffs could result in an all-out trade war.

Trump’s decision to use national security as an excuse for the tariffs could mean other countries will do the same. For instance, countries could justify a tariff on agriculture imports to the U.S. by saying that food supply is a national security issue, former U.S. trade representative Michael Froman told CNBC.

Noting that the U.S. “could face a lot of barriers around the world,” Froman told CNBC, “The U.S. has traditionally under both Republican and Democratic administrations been very reluctant to use [Section] 232 and the national security exception precisely because we worried that other countries would abuse it.”

Though Trump has said that trade wars are “good and easy to win,” history suggests otherwise. The last U.S. trade war in 1930, for instance, caused U.S. imports to decline by 40% and is credited with making the Great Depression significantly worse, CNN noted.

Even if countries don’t retaliate, however, steel and aluminum tariffs are still expected to have an impact on U.S. consumers and the economy by themselves. Though the tariffs would benefit American manufacturers of steel and aluminum, they would result in higher prices on goods that use the materials, such as automobiles, canned goods and beer.

The Beer Institute reported that a 10% aluminum tariff would result in the loss of approximately 20,300 jobs at bars, breweries and other beer production facilities, CNN reported. The American International Automobile Dealers Association speculated in a statement quoted by CNBC that the move would “raise the sale prices of [cars and trucks sold in America] substantially.”

“There is no escaping the fact that these tariffs — or new taxes, because that is what they are — will raise costs for many small to mid-size businesses,” Small Business & Entrepreneurship Council President & CEO Karen Kerrigan said in a statement. “This move to impose tariffs will have unintended consequences and small businesses will pay the price.”