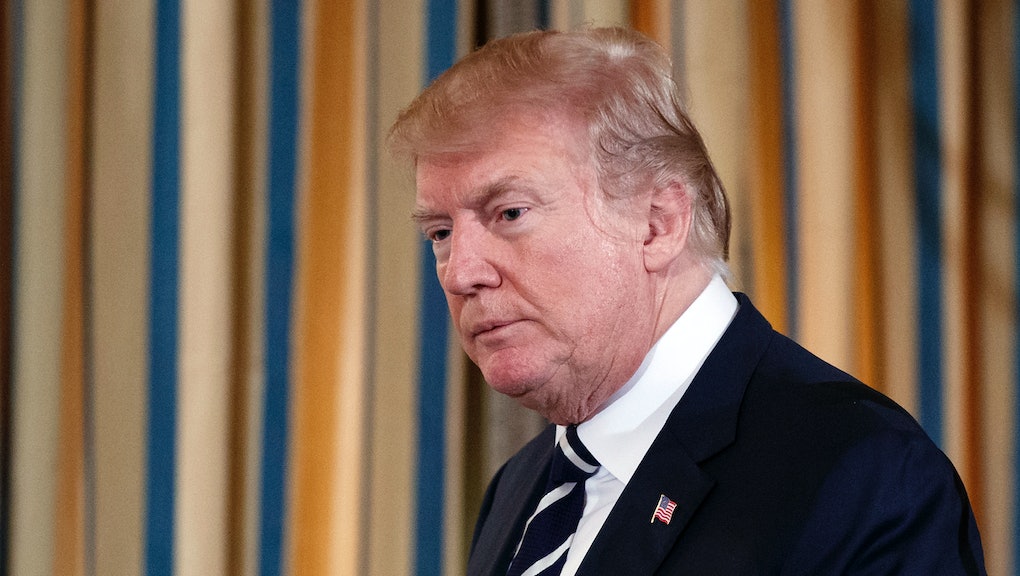 Donald Trump is an action hero — in his head

President Donald Trump raised eyebrows this week when he mused that he would have stormed into Marjory Stoneman Douglas High School — unarmed — to help stop the deadly shooting there last month.

“You don’t know until you test it, but I think, I really believe I’d run in there, even if I didn’t have a weapon,” Trump told a gathering of governors at the White House on Monday. “And I think most of the people in this room would have done that, too.”

It was, by any measure, a dubious claim — especially so given that it came from Trump. But it is not the first time he’s miscast himself in the hero role. With his blustery brags, he’s got a long history of spinning tall tales of his heroism — tales that often fail to measure up to reality.

Trump to the rescue — or perhaps not

In the wake of his wild claim this week, reports seemingly debunked two of Trump’s most famous tales of coming to the rescue of others.

The first story dates back to 1991, when — according to a New York Daily News report at the time — Trump said that he jumped out of a limo to stop an in-progress mugging.

“I’m not looking to play this thing up,” Trump, never one to boast, told the paper at the time. “I’m surprised you found out about it.”

According to Trump, he was en route to a Paula Abdul concert when he spotted a man beating someone with a bat, ordered his driver to stop the limo and got out to confront the attacker.

“The guy with the bat looked at me, and I said, “Look, you’ve gotta stop this. Put down the bat,” Trump told the Daily News. “I guess he recognized me because he said, ‘Mr. Trump, I didn’t do anything wrong.’ I said, ‘How could you not do anything wrong when you’re whacking a guy with a bat?’ Then he ran away.”

Trump’s allies — including those at Breitbart News — pointed to this reported act of heroism in the wake of his Parkland comments this week as proof of his bravery.

But a 16-year-old witness quoted in the Daily News piece almost 30 years ago contradicted Trump’s tale, saying that the mugger had scrammed by the time the future president arrived and that he “just looked around and went back into his limo.”

The witness, Kathleen Romeo-Nunez, now 43, again dumped cold water on Trump’s version of events, telling the Daily News once more that Trump showed up after the assailant was already gone and that the confrontation between the two Trump had described never actually happened.

“A car pulls up, he gets out, people acknowledge his presence,” she said Thursday. “He’s looking around, seeing what’s going on. Then he got back in and left.”

The Daily News described Romeo-Nunez as the “only known witness” to the event.

The second supposed act of heroism is more recent.

In November 2017, then-University of California, Los Angeles basketball player LiAngelo Ball and three teammates were arrested in China for shoplifting from a Louis Vuitton store.

When the players were returned to the U.S. a week later, Trump took credit, claiming he was personally responsible for their release and bashed LiAngelo’s father, LaVar Ball, for being “very ungrateful.”

“It wasn’t the White House, it wasn’t the State Department, it wasn’t father LaVar’s so-called people on the ground in China that got his son out of a long term prison sentence,” Trump tweeted. “IT WAS ME.”

But an ESPN report this week suggests that it, in fact, was not him.

In a deep-dive into the ordeal, senior writer Arash Markazi reported Friday that the “charges were dropped, the bail refunded and the players’ passports returned two days before White House chief of staff John Kelly called the players to inform them that President Donald Trump was working on their release.”

“The situation was already resolved by the time we heard about Trump’s involvement,” a team source told ESPN. “That’s not to take away from the fact that he got involved, but the players already had their passports back and their flights booked to go home Tuesday night when Gen. Kelly called the players.”

Trump is known for his propensity for embellishment — and to brag constantly about knowing more and being better at things than everybody else.

But there is at least one story Trump has told in which he isn’t the hero.

In a 2008 interview with Howard Stern, Trump recounted a ball at Mar-a-Lago in which an elderly man fell off a stage, landed on his head and lay unconscious bleeding on the ground.

“This guy falls off right on his face, hits his head, and I thought he died. And you know what I did? I said, ‘Oh my God, that’s disgusting,’ and I turned away,” Trump told Stern. “I couldn’t, you know, he was right in front of me and I turned away.”

That reaction seems much more in line with the Trump described by biographer Michael D’Antonio in a CNN piece this week blasting him for his Parkland comments.

“In the more than three years I studied his life to write his biography, I found no evidence that he possessed any physical courage and few signs that he ever made any significant effort on behalf of anyone who couldn’t do something for him,” D’Antonio wrote Tuesday. “Rather than supporting his boasts, the facts of Trump’s life tell us that his self-glorification about Parkland was idle talk.”