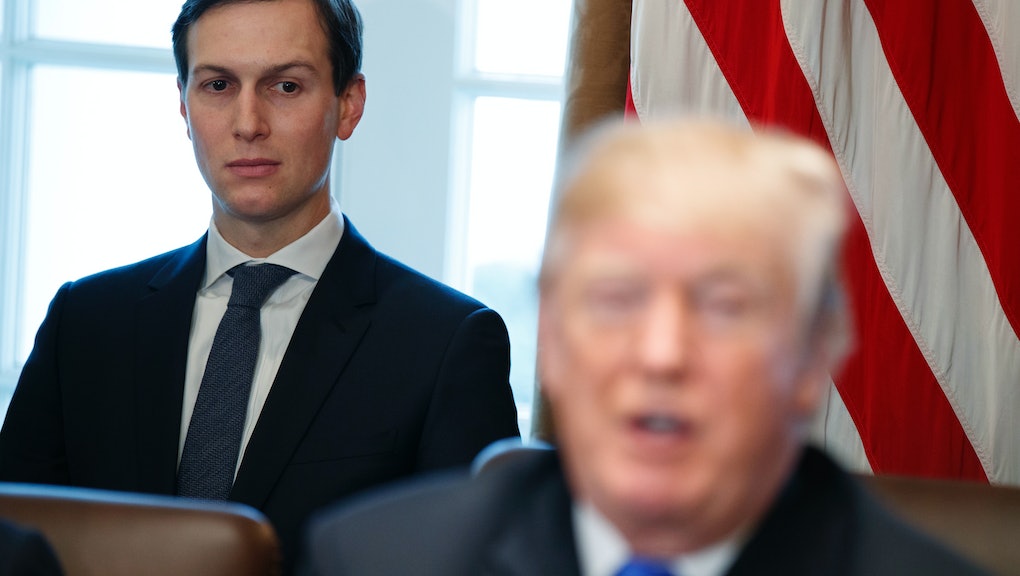 This week in Trump-Russia news: The president’s inner circle is falling apart

It was a bad (terrible) week for President Donald Trump.

Hope Hicks, one of his longest-serving and most loyal aides, is leaving the White House. Jared Kushner, his son-in-law and senior adviser, has his back against the wall. And Jeff Sessions, his attorney general, isn’t giving him the protection he wants from special counsel Robert Mueller’s Russia investigation.

His inner-circle is falling apart amid administration dysfunction and misconduct probes — all while Mueller’s investigation picks up speed.

Here’s how the Russia probes factored into this week’s White House chaos — and why all eyes are now on the president’s son-in-law.

Kushner on the ropes

Kushner’s future in the administration is suddenly looking pretty tenuous.

Kushner’s security clearance had long been a matter of controversy.

He had failed to disclose a number of foreign contacts — including the infamous meeting between Donald Trump Jr. and Kremlin-connected lawyer Natalia Veselnitskaya he attended in 2016 — on his clearance application forms, and had spent more than a year accessing the nation’s deepest secrets on an interim clearance.

Kushner’s application for permanent clearance was reportedly being held up by the Mueller probe, which appears to be increasingly focused on him.

Of particular interest to the special counsel, according to NBC News, is the possibility that Kushner’s business interests have influenced the Trump administration’s policy decisions.

The news that Hicks is resigning came on the heels of her testimony before the House Intelligence Committee on Tuesday.

Trump seemed preoccupied with the Russia probe ahead of her hearing, tweeting — out of the blue — the words “WITCH HUNT!”

In the closed-door session on Capitol Hill, Hicks reportedly stonewalled the panel’s questions about her time in the White House — but did concede that she has at times told “white lies” on Trump’s behalf.

While the New York Times’ Maggie Haberman reported that the announcement of her coming departure Wednesday was unrelated to her testimony the day before, CNN reported that the president had admonished Hicks following the hearing, asking her how she “could be so stupid.”

“Apparently, that was the final straw for Hope Hicks,” CNN’s Erin Burnett said

Hicks will leave the White House with questions around her time with Trump still unanswered.

She has emerged as a target of scrutiny in the Mueller probe over her role in helping Trump craft the deceptive statement his eldest son initially used to explain his Trump Tower meeting with the Kremlin-connected lawyer who was said to have dirt on Hillary Clinton.

She was also likely present for off-the-cuff conversations in which Trump discussed the ongoing Russia probes against his lawyers’ advice, potentially subjecting her to “an unwelcome amount of legally relevant comments from the president,” according to Politico.

“I think the president has put her in a very precarious position,” a senior administration official told the publication.

Hicks’ departure also seems to represent something of a shakeup at the communications department.

The former Hollywood public relations executive had been brought on by Kushner last spring and served as the primary spokesperson for the embattled senior adviser.

Amid all the chaos at his White House, Trump went on the attack — and picked out a familiar target: Jeff Sessions.

The attorney general on Tuesday announced that his Justice department would probe possible abuses of the Foreign Intelligence Surveillance Act, like those Rep. Devin Nunes (R-Calif.) alleged in his misleading memo.

“We believe the Department of Justice must adhere to the highest standards in the FISA court, and yes, it will be investigated, and I think that’s just the appropriate thing,” Sessions said.

But Sessions’ announcement Tuesday didn’t sit well with Trump, who criticized the decision to have the inspector general probe the alleged misconduct rather than DOJ lawyers.

The latest attack from Trump is a window into the souring relationship between the president and his attorney general, who had been one of his earliest and most-ardent supporters.

The Washington Post on Wednesday reported that Mueller is investigating the possibility that Trump tried last summer to get rid of Sessions, whom Trump has privately dubbed “Mr. Magoo.” According to the Post, Trump has groused about what he says is a lack of loyalty on Sessions’ part.

While the Mueller probe appears to be gaining momentum, one of the three Capitol Hill investigations appears increasingly imperiled by partisan politics.

According to Politico, Republicans are looking to end the House Intelligence Committee’s Russia investigation, which has been the stage of high-profile political drama in recent months.

Nunes, the chair of the committee, has been accused of trying to undermine the federal Russia probe by releasing his disputed memo early last month.

Rep. Adam Schiff (D-Calif.), the ranking Democrat on the committee, sought to release a rebuttal, but was blocked by Trump, who said the document was “very political and long.”

But, last week, Democrats were able to release a heavily redacted version of their report, which Trump described as “totally fraudulent.”

The latest controversy to emerge from the panel came when portions of Hicks’ testimony leaked, which was the final straw for some lawmakers.

“I want [the House investigation] to end because we have gone off the rails of being able to objectively do our job,” Rep. Tom Rooney (R-Fla.) said Friday.

Schiff forecasted the potential end of his panel’s probe late last year, tweeting in December that he feared Republicans were attempting to kill the investigation.

“By shutting down the congressional investigations when they continue to discover new and important evidence, the White House can exert tremendous pressure to end or curtail Mueller’s investigation or cast doubt on it,” Schiff tweeted in December. “We cannot let that happen.”

Meanwhile, Russian President Vladimir Putin this week claimed that he has an “invincible” nuclear weapon during a state of the nation speech threatening the U.S.

“With the missile launched and a set of ground tests completed, we can now proceed with the construction of a fundamentally new type of weapon,” Putin said.

It’s not clear if he does, in fact, possess such a weapon or if he was bluffing.

The announcement came as the Trump administration renews its focus on nuclear weapons.