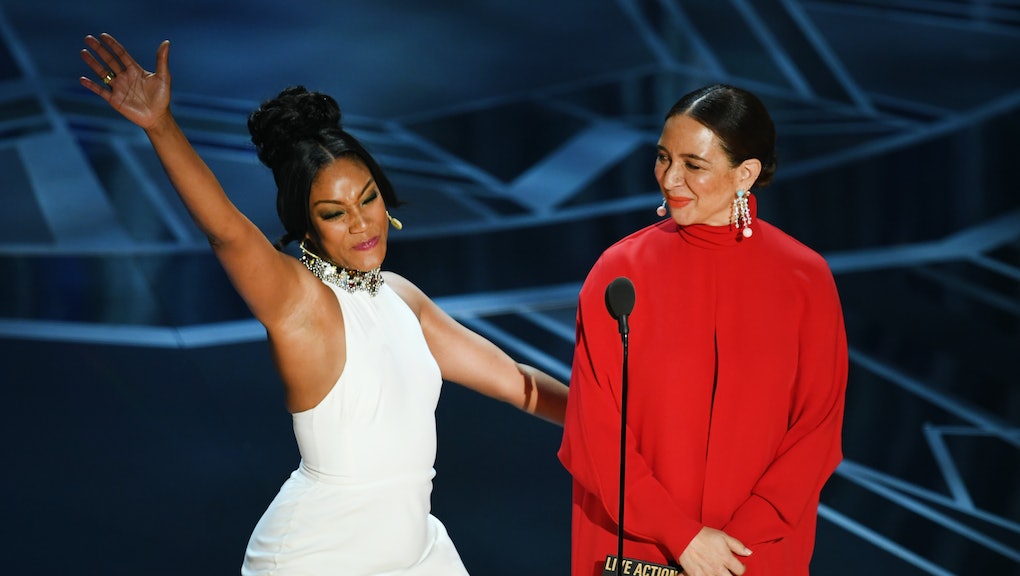 Tiffany Haddish recycles her McQueen dress for its 3rd public appearance, this time at the Oscars

On Saturday Night Live in November, when she was the host, she spoke about not following the celebrity law that says you can’t wear the same dress twice. “I feel like I should be able to wear what I want, when I want, however many times I want as long as I Febreeze it,” Haddish said during her opening monologue.

Then she pointed to white Alexander McQueen dress she had on that night, with its elegant bejeweled collar.

“Like this dress,” she said. “I wore it on the red carpet for Girls Trip and my whole team, they told me, ‘Tiffany, you cannot wear that dress on SNL. You already wore it. It’s taboo to wear it twice.’ And I said, ‘I don’t give a dang about no taboo. I spent a lot of money on this dress. This dress costs way more than my mortgage. This is a Alexander McQueen, OK? It’s a $4,000 dress. I’mma wear this dress multiple times.’”

So when was the next time and — just so we’re counting here — the third time Haddish stepped out in this slinky McQueen? At the Oscars, of course.

After arriving in a gown that was a nod to her late father’s Eritrean heritage, Haddish changed into that white McQueen dress yet again for presenting onstage with the great Maya Rudolph.

And she looked great. Febreeze probably wasn’t even needed.