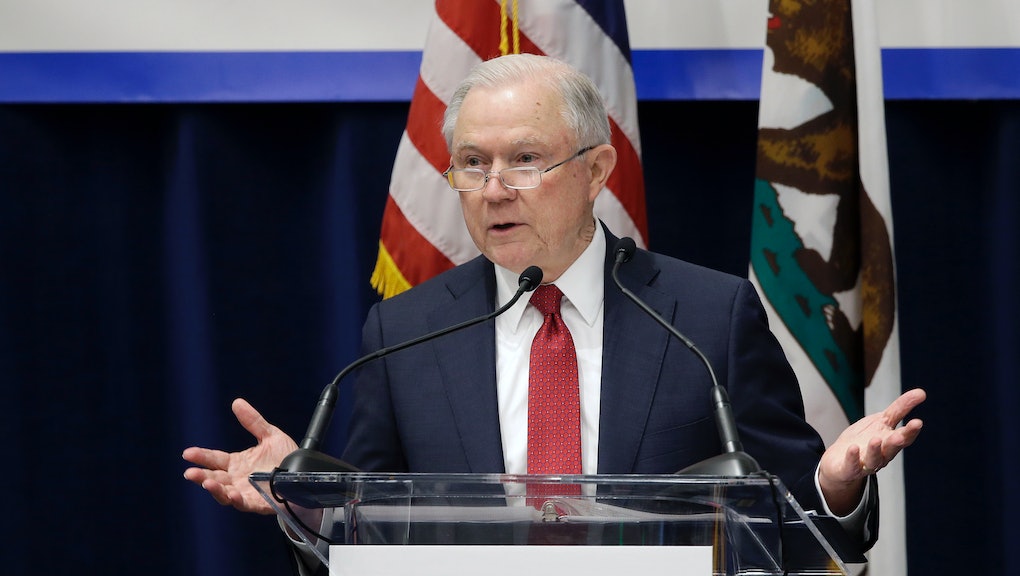 Trump administration brings suit against California over sanctuary cities — but will they win?

The Trump administration continued its ongoing crusade against “sanctuary cities” Tuesday, as the U.S. Department of Justice filed a lawsuit against the state of California over several recently passed laws that move to protect undocumented immigrants in the state from federal immigration officials.

The suit, which was filed in the U.S. District Court for the Eastern District of California, specifically takes aim at three new California policies: the Immigrant Worker Protection Act, which prohibits employers from voluntarily giving information or access to federal immigration officials trying to enforce federal immigration policies; Assembly Bill 103, which enables the state’s attorney general to monitor immigrant detention facilities; and the California Values Act, which prohibits local law enforcement from automatically transferring detainees to federal immigration authorities, or holding them for federal authorities beyond their release date, among other measures.

“California is using every power it has — and some it doesn’t — to frustrate federal law enforcement. So you can be sure I’m going to use every power I have to stop them,” U.S. Attorney General Jeff Sessions said about the lawsuit in a speech Wednesday.

“We are going to fight these irrational, unfair, and unconstitutional policies that have been imposed on you and our federal officers,” Sessions added in his remarks to law enforcement officials. “We are fighting to make your jobs safer and to help you reduce crime in America. We are fighting to have a lawful system of immigration that serves Americans. And we intend to win.”

The Department of Justice says that California’s laws violate the Supremacy Clause of the U.S. Constitution, which asserts that federal law supersedes state law, and prohibits states from interfering with federal law. The Justice Department is pointing to the Supreme Court case Arizona v. United States to back up its case, which asserted the federal government’s authority over states on immigration, and struck down certain parts of Arizona’s immigration laws as being in conflict with federal law.

California officials fired back against the lawsuit, which Gov. Jerry Brown called a “political stunt” in a statement that closed with an apparent dig at President Donald Trump’s monosyllabic language on Twitter.

“At a time of unprecedented political turmoil, Jeff Sessions has come to California to further divide and polarize America,” Brown said. “Jeff, these political stunts may be the norm in Washington, but they don’t work here. SAD!!!”

The California lawsuit marks the Trump administration’s latest effort against so-called “sanctuary cities” — jurisdictions that limit how local law enforcement can cooperate with federal immigration authorities regarding the detention of undocumented immigrants.

Soon after taking office, Trump signed an executive order barring federal funding to sanctuary jurisdictions, which was later struck down in federal court. The Justice Department has also explored ways to enforce criminal charges for state and local officials who enact and uphold sanctuary policies, a policy that was also introduced in Congress by Indiana Rep. Todd Rokita.

“It makes sense to me that the administration is taking the time to kind of ramp up everything that it’s been doing [on sanctuary cities],” Sarah Pierce, a policy analyst at the Migration Policy Institute, said in an interview about the lawsuit filing. “Most of what its been doing so far has been related to grants … but there’s only so much they can do on that, and they’ve definitely run into some big obstacles, including in the court system. So this makes sense that they’ve found what they think to be another avenue to go after states and jurisdictions that are failing to comply.”

In January, the Justice Department sent letters to 23 jurisdictions demanding them to certify they’re complying with Section 1373 — a federal statute stipulating that federal, state and local officials “may not prohibit, or in any way restrict, any government entity or official from sending to, or receiving from, the Immigration and Naturalization Service information regarding the citizenship or immigration status, lawful or unlawful, of any individual.”

These jurisdictions, however, have held strong against the Trump administration’s efforts. In addition to legislative moves like the California provisions now under threat, 16 state attorneys general filed a brief in February in support of a legal challenge filed by the city of Chicago over the restriction of federal funding for sanctuary jurisdictions. The amicus brief argued that the conditions that the Trump administration imposes on jurisdictions to receive federal funding interfere with states’ and localities’ right to set their own law enforcement policies. “The Department of Justice lacks the authority to impose these new conditions,” a statement announcing the brief noted.

“The Trump administration does not have the authority to unilaterally transform state and local police into federal immigration agents – and they cannot punish a locality simply because it won’t comply,” New York Attorney General Eric Schneiderman said in a statement. “In cities across New York, local law enforcement have proven that protecting public safety goes hand in hand with building trust with immigrant communities. Attorneys general will continue to fight back against the Trump administration’s draconian immigration policies that threaten our communities and our safety.”

The January letters were directly met with a similarly combative response; mayors from several of the nation’s largest cities, including New York and Chicago, refused to attend a January meeting with Trump about infrastructure. The city of West Palm Beach, Florida, filed a lawsuit against Sessions over the letter, in which it accused the Justice Department of “erroneous and recurring harassment of the city and its officials based upon wrongly perceived non-compliance.”

Because of jurisdictions’ strong pushback, Pierce noted “there’s no evidence that [the Trump administration] eliminated or even reduced sanctuary jurisdictions” in the president’s first year. This is despite the administration’s approach of “really trying to force the issue” with local jurisdictions, Pierce said.

“In fact, there might be an argument that sanctuary jurisdictions increased under the administration,” Pierce said, adding that “the harder he forces, the more resistance seemed to be coming up.”

When it comes to the California lawsuit, Pierce speculates that it’s hard to know whether or not the Trump administration will finally win, citing that though the Arizona ruling seemingly backs up the Justice Department’s position, and that the California laws are very “carefully written,” with clear exemptions that could put them in line with federal law.

The lawsuit was also filed in the particularly liberal Ninth Circuit, which could further hinder the administration’s efforts.

“If [the Trump administration is] going to succeed, it might not be until this reaches the Supreme Court, which I would not be surprised if it did,” Pierce said.