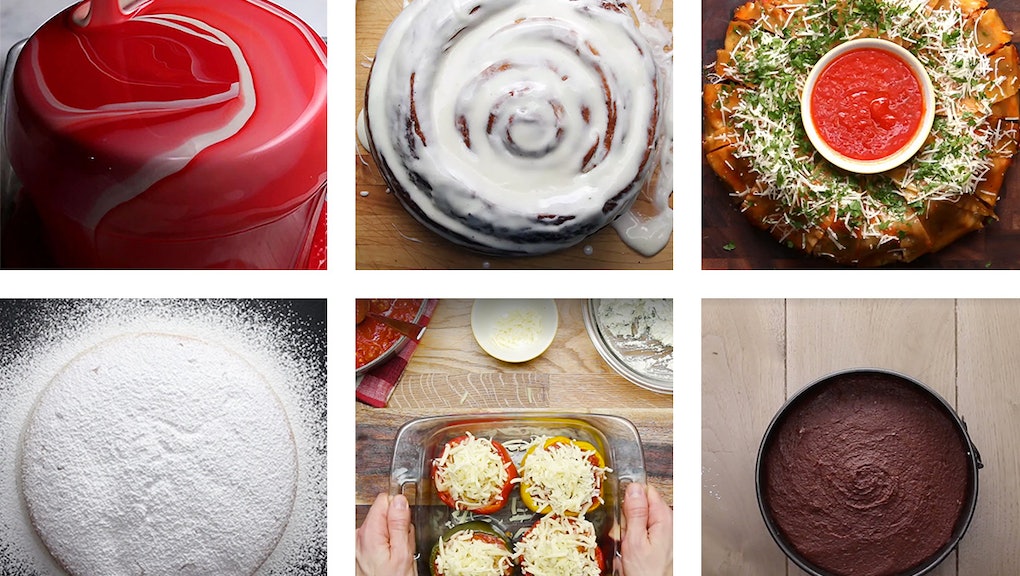 What the most successful ‘BuzzFeed’ Tasty recipes have in common

What’s made with butter, has been viewed by millions and has inspired countless knockoffs?

Some of the internet’s most viral, so-called “hands and pans” video recipes.

BuzzFeed Tasty’s arsenal of addictive, drool-inducing visual recipes are ubiquitous on social media platforms — Facebook in particular. Through screen, consumers have spent 500 million-plus hours watching Tasty videos and have shared them more than 800 million times. These colossal numbers feel a bit inconceivable; what’s more tangible is the recipe for success behind the top videos.

Using software from video analytics firm, Tubular Labs, Mic pulled the nine most-viewed, single-recipe videos published on Tasty’s Facebook page in 2017 (list below), and have found some glaring commonalities. It’s clear that not only has the BuzzFeed brand cracked some kind of production code, but it’s also unearthed some psychological musts when it comes to procrastinating online. The brand has uncovered certain properties that light up the brain and keep people watching. Next time you find yourself in a Tasty loop, see if the video has at least one of the qualities below.

It’s either lasagna or dessert

Three out of the nine top-performing single item recipes are a riff on lasagna. The remaining six are dessert. What this tells us about our collective appetite is something we already knew: People like carbs and people like sugar. The lasagna party ring recipe racked up more than 64 million views, with chicken Alfredo lasagna and lasagna-stuffed peppers trailing close behind.

There’s more to it than the fact that we’ve all got a little Garfield inside us. Lasagna recipes are made with a predictable ritual of layering, something that’s very satisfying for viewers. These methodological recipes incite a soothe factor, or, as Discover Magazine put it, a “just right” feeling: “It’s the sensation that arises when we’ve put things in order, and serves as a useful cut-off point for simple tasks.” While nearly all of Tasty’s videos capitalize of short, sped-up repetitious movements, lasagna’s built-in requirement for layering boosts its watchability.

As former New York Times restaurant critic Frank Bruni wrote in the Atlantic about food TV’s appeal, watching this type of media is a “passive, mind-resting experience. [Viewers] want something that doesn’t require close attention, the way a twisty plot might. Something akin to visual music. Something ambient, in a way.” Lasagna recipes win this lack of plot twist theory, because even when wrapped around a bundt pan or stuffed in a pepper, most eaters are familiar with how the dish is prepared, even if they don’t consider themselves cooks.

It glosses over the struggle

The fidget spinner cookie requires a ton of steps; after preparing a simple batter from flour, sugar, salt, butter, vanilla and cream cheese, bakers are instructed to refrigerate the dough, roll the dough, cut out several different shapes from the dough, repeat that process, let cook all of the pieces, let the cookies cool, ice and let dry and then delicately construct each individual cookie. Maybe a seasoned baker (or engineer?) finds the process elementary, but for the novice cook, this isn’t the easiest, or, as one commenter described it, a total pain in the ass.

But the video draws in viewers in its first two seconds by overlooking the more complicated instructions and simply showing a set of hands mixing pre-portioned servings of flour, sugar and salt. This is a pattern in many of the top Tasty recipe videos: The video opens with an image of the finished product — the aspiration — and then cuts to a very basic instruction, like mixing flour and water, or, in the case of chicken Alfredo lasagna, slicing a chicken breast. It makes the viewer believe the end result is within their reach, obscuring the fact that a professional in a test kitchen (and a skilled video editor) are involved. It’s not always a video editing trick — chronologically, the batter mixing is often the first step of a recipe. But the strategic cut from finished product to straightforward instructions is what reels in the audience and keeps them watching.

When in doubt, add butter — or some kind of fat — to make a winning recipe. It’s the unofficial rule of French cooking and seemingly the official rule of Tasty desserts. The exquisite Giant Cinnamon Roll, whose mere image admittedly activates salivation, calls for one-half cup of butter, and it’s yielded more than 61 million views.

According to the recipe page, this enticing roll serves 12, meaning a single serving contains 522.5 calories, 25.8 grams of fat and 29.2 grams of sugar. While there’s nothing inherently wrong with these numbers, the baker has to consider if they’re really sharing this gigantic pastry with 11 other people.

The video with the most views in 2017 — the labor-intensive shiny mirror cake recipe that collected more than 151 million sets of eyeballs — calls for a large amount of heavy cream, along with three separate recipes (off Facebook, it’s called the 3-Part Mirror Glaze Cake) that aren’t alluded to in the two-minute social clip. This number-one performer begins and ends with a silky, soothing glaze that attracts the viewer. It uses all of the three criteria above to hook an audience.

As for whether the multi-step, milk-drenched cake actually tastes good? Can’t say I’d ever spend the many, many hours baking to figure that out.