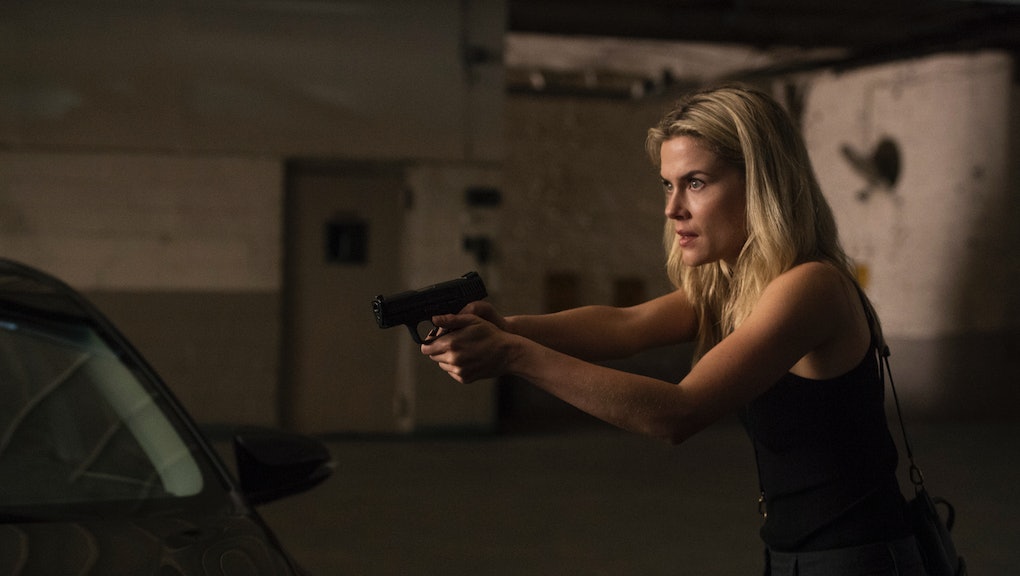 The first season of Jessica Jones — which stars Krysten Ritter as a drunken, reluctant private investigator-cum-superhero with superstrength — is arguably the most compelling, haunting and well-crafted season of Marvel’s Netflix shows to date. That’s due in large part to its main villain, Kilgrave — played by David Tennant — who has the supernatural ability to command anyone to carry out his will.

Throughout the first season, we learn Kilgrave used his powers to manipulate Jessica into being his personal sex slave, forcing her to carry out all sorts of inhumane, horrifying tasks on his behalf. It’s a powerful, disturbing illustration of sexual abuse and of power imbalances — one that continues to have ripple effects for every character in the show, even after the season one finale.

One such character is Trish Walker, played by Rachael Taylor, who is Jessica’s adoptive sister and occasional sidekick, and who herself has a history of trauma from her days as a child celebrity. Now that season two of Jessica Jones is officially available for streaming in full on Netflix, Mic caught up with Taylor to chat about the opportunity to delve more deeply into Trish’s backstory — and about the show’s unexpectedly newfound relevance in the wake of #MeToo.

Editor’s note: The following interview has been edited for clarity and length. Some spoilers for season two of Jessica Jones follow.

Mic: How would you describe the general arc of Jessica Jones’ second season and how it picks up from the events of the first?

Rachael Taylor: What I love about season two is, in lots of ways, it’s about fighting the monster within. And our show has a complicated idea about what good and bad is.

Ultimately, a big, bad villain does reveal itself, and when it does, it’s shocking and emotional — but season two really does a deep dive into all of the characters’ personal history and their troubled backstories. And the show is really about where these characters have been, about some of the painful things that have happened in their pasts and how that impacts where they are in the present.

The first five episodes made available to the media before release are noticeably character-driven, so I’m interested to see how those threads culminate for the plot overall.

RT: Yeah, but it’s really masterful what they’ve done. Ultimately there are all these tentacles and they all converge in a way that’s extremely clever, so I think it’ll be satisfying.

For Trish, we left her at a really interesting place at the end of season one. Obviously, Trish and Jessica triumph over Kilgrave in the very end — even though it’s certainly a very painful process — but ultimately they tackled the monster. And I think for Trish, it whet her appetite for more.

Trish is a character that, despite everything she has, she would love to have abilities like Jessica and would love to be able to help more people in the way that Trish thinks Jessica should be doing. I think Trish feels vulnerable and she wants to be a protector of people and she wants to do good in the world. And I think season two really sees that rise to the surface.

In a way, it’s a bit strange to watch Trish so aggressively push Jessica into confronting her past.

RT: Exactly. She aggressively encourages Jessica to learn more about what happened to her when she was a kid and to discover who she really is, and Jessica is very reluctant — quite rightfully, because Jessica is a character that has a very painful past. And Trish really pushes her. I think there’s a dual motivation for why Trish is pushing her so hard.

The show itself is obviously primarily about Jessica and her trauma, but Trish does get a chance to confront her own history with sexual violence when she encounters Max, a filmmaker who assaulted her when she was a child actor. What was it like tackling that arc in particular?

RT: Certainly with all the stories we’re seeing in Hollywood at the moment, it’s on one hand, not a surprising storyline because young women in Hollywood can be put into very vulnerable positions — and unfortunately, this is quite a familiar story in the real world. [Jessica Jones showrunner Melissa Rosenberg] has a way of writing about culture and the female experience that’s so bang-on. It’s certainly a timely topic.

In terms of Trish’s backstory, I did quite a lot of research into former child stars and what their experience is like — because I wasn’t a child star, so I don’t know what that’s like. And with any character you play, not just Trish, there’s always a certain amount of research and character-building work you do as an actor, so it was a really fun challenge. I felt like a kid in a candy store in terms of how much great material I had to work with.

What’s particularly interesting is that you finished filming season two of Jessica Jones before #MeToo really erupted in October. What was it like watching that unfold after you had already filmed this season?

RT: When the Harvey Weinstein stuff first came to the surface, Krysten [Ritter] and I and Carrie-Anne Moss all texted each other and we were like, “Can you believe Melissa wrote this into our show?” I mean, she wrote it two years ago so she was ahead of it in lots of ways.

I will say what’s great is that this conversation is front and center right now, but men’s abuse of power is age-old, unfortunately. And Melissa writes about the female experience in a way that is truthful. So really, she was just writing the truth.

This was before the #MeToo and the Time’s Up movement, so all I can say is Melissa is an incredible writer who’s tapped into something that’s important. It’s important that we’re having these conversations and I’m really proud that our show is able to contribute to that conversation in some way. Or, at least serve as a mirror for what’s going on — a very dark mirror.

This season, it seems like Trish is partly the mirror of a celebrity who’s trying to be politically active — in the show, it’s through her radio talk show — but keeps getting shouted down and told to stick to what she knows.

RT: Yeah, and it’s very truthful. I certainly wish that wasn’t the case but women’s opinions aren’t always taken as seriously as they should be. Obviously, we’re in a moment where we’re seeing a significant revolution in terms of that, but in the past, I think a character like Trish has been relegated to, “Oh, can’t you just go over there in the corner and be pretty and say what we want you to say?”

I think that’s something she’s really struggling with and that she wants to change.