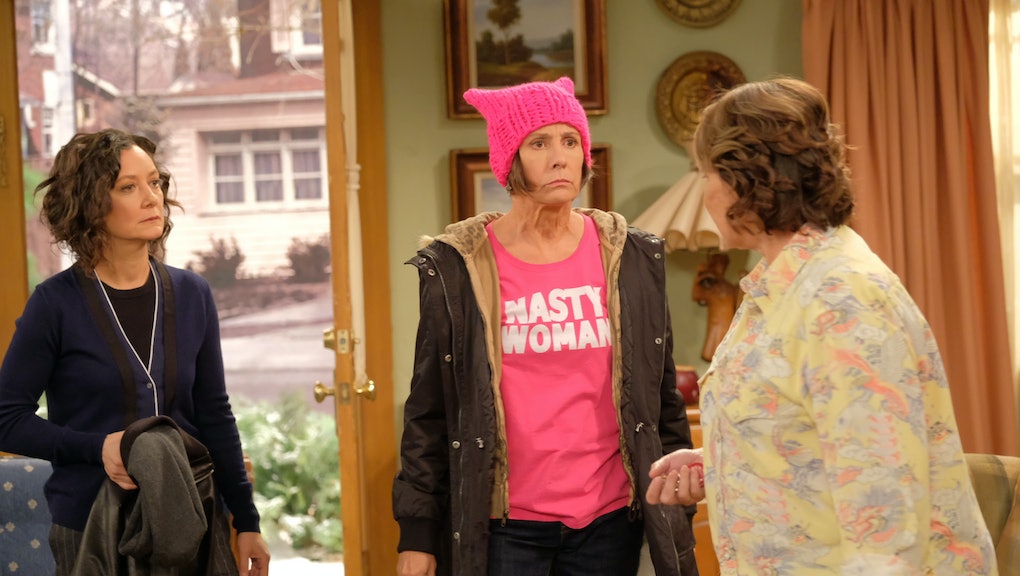 In the first episode of the upcoming Roseanne reboot, the titular character, Roseanne Conner — played, of course, by star and namesake Roseanne Barr — faces off against her now-estranged sister Jackie, played by the perpetually underrated Laurie Metcalf. Jackie shows up to the Conner home decked out in some “I’m with her” gear: a pink pussy hat and “Nasty Woman” T-shirt. They call each other “deplorable” and “snowflake.”

At one point, Roseanne mockingly asks Jackie if she’d like to take a knee while the family says grace before thanking the Lord for “making America great again.” If you can’t tell, Roseanne voted for President Donald Trump and Jackie supported Hillary Clinton — but in a twist, she admits she actually voted for Jill Stein.

What seems to be intended as a true-to-life conversation mimicking the ones that surely happened around American dinner tables after the 2016 election instead feels like the television embodiment of two people arguing in your Twitter mentions. Jackie and Roseanne’s “positions” feel about as round and nuanced as a recycled meme your relative shares on social media.

That’s not to say real-life arguments between family members at opposite ends of the political spectrum are any more complex. But to have these two characters reduced to flat political caricatures is a disappointing choice for a show that, in its prime, tackled real issues throughout its nine-season run from 1988 to 1997.

Roseanne was lauded, at the time and in retrospect, for depicting a working-class family that faced actual hardship versus an overly sweet and sanitized version of family life. It dealt with issues like homophobia, abortion and domestic abuse. And the character of Roseanne was seen as a model of womanhood that pushed back against impossibly high standards for women. But the show’s final season went wildly off-the-rails, with an arc that saw the blue-collar Conners winning the lottery before concluding in a pointless twist reveal that upended the entire series.

When it was announced in 2017 that the show would be joining the ’90s revival trend with a nine-episode revival season (see Will & Grace, Fuller House, etc.) the network execs hinted the show would disregard the twists of the final season and pick up largely where it left off before it jumped the shark. The Conners would again be a working-class Illinois family.

Dan (played by John Goodman) and Roseanne would return, along with their children, including Darlene (played by Sara Gilbert) and Becky (played by Lecy Goranson). This time, though, there would be grandchildren and family would be facing decidedly 21st-century problems.

In January, executive producer and co-showrunner of the revival, comedian Whitney Cummings, explained in a piece for Vulture that she felt it was important to depict the Conner family in a way that felt truthful to their “fiscal and emotional reality,” a reality that acknowledges some of the family voted for Trump. “I promise you’re going to be nettled by something on the show. And I think that’s good,” Cummings said of the new revival’s subject matter.

But the reboot’s premiere doesn’t feel provocative. It feels overly simplistic, as though Roseanne and Jackie are political caricatures rather than genuine characters with full lives. Setting aside the heavy-handed exposition, the two of them loudly proclaiming their political affiliations is just too on-the-nose.

Fortunately, the revival settles into itself in later episodes (judging from a total of three screeners), when the show begins to bring back the same gruff good-naturedness of its original run. Far more interesting than the Trump vs. Clinton clash of the first episode are the politically charged family debates, anchored by the Conners’ relationships with one another. The reboot succeeds when it shows — rather than tells – the characters’ feelings about hot-button issues of the day. In addition to Roseanne and Jackie’s falling out over the presidential election, we see how Becky and Darlene are making due in a changing economy. Becky’s working at a Mexican restaurant and trying to come up with extra money, while Darlene’s lost her job and moved back in with her parents, bringing her two kids with her, including her dress-wearing son.

Dan’s potshots at his gender-creative grandson come off as casually cruel in the premiere. But in a subsequent episode, his outlook is softened and given more nuance. It becomes clear that, rather than hating the idea of his grandson wearing “girl’s clothes,” Dan’s disapproval comes from a misguided concern for his grandson’s safety and success at school.

That episode also features a genuinely thoughtful exchange between Darlene and Dan, where she points out her parents had no problem with her wearing basketball shorts every day. Indeed, Darlene’s iconic ripped jeans and oversized flannel shirts were one of the best things about the show’s original run. Contrasted with Becky, Darlene’s clothing choices presented an alternate version of girlhood — and, later, womanhood.

It feels true to the characters that Dan and Darlene would have differing ideas about how to handle their dress-wearing grandson and child. And Dan’s opinions, presented with his character’s classic mix of down-to-earth practicality and stern kindness, feel consistent with who we know him to be rather than the ideological talking points of a Twitter egg. In the same episode, Roseanne sits down with her grandson and has a heart-to-heart in which she asks him if wearing the clothes he likes is really all that important. When he says it is, she listens.

The painful face-off in the first episode may be, as the Village Voice pointed out, the result of Barr’s attempt to marry the fictional Roseanne to her real-life persona. In the years since the show has been off the air, Barr has become a vocal Trump supporter, tweeting out conspiracy theories and even mounting an unsuccessful campaign to run for president as the Green Party candidate. The fictional Roseanne of the fictional Lanford, Illinois, has done none of those things.

The cringe-worthy premiere does accomplish the apparent goal of getting the question of who-voted-for-whom out of the way. But the personal is political, and watching the Conners struggle through their latest family tribulations in later episodes is much more satisfying — and familiar — than watching Jackie and Roseanne shout political slogans across the living room.