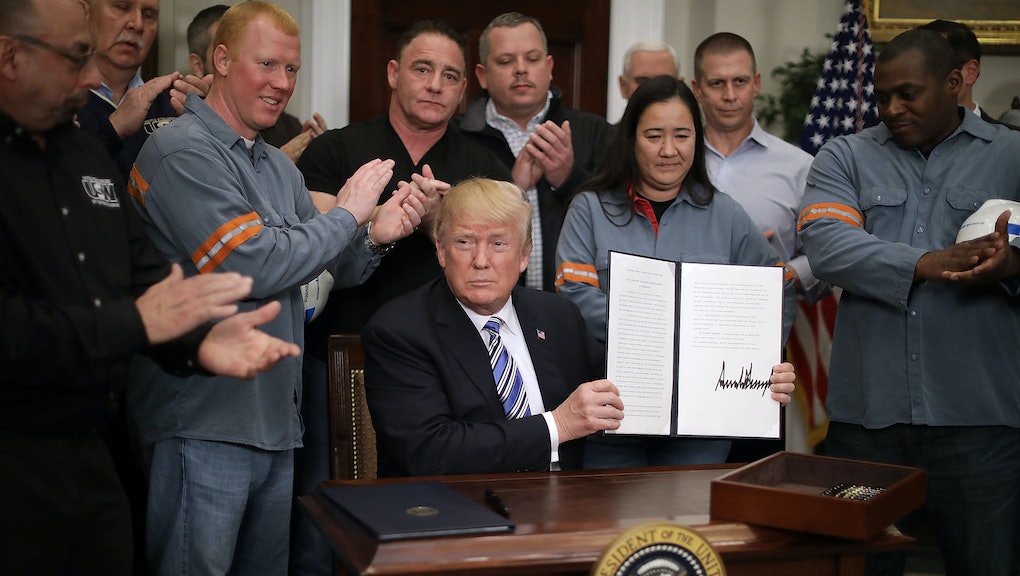 Trump points to history to defend his tariffs, but history shows they have disastrous effects

The tariffs, which may affect American workers and consumers, have already been met with much international backlash. The European Union has vowed to retaliate against the tariffs, imposing their own fees on U.S. exports such as blue jeans and bourbon.

Trump, however, has pressed on with the tariffs, tweeting that should they spur repercussions, “Trade wars are good, and easy to win.” In his remarks Thursday, the president invoked his predecessors, pointing to a 19th century embrace of tariffs to justify his own decision.

“Our greatest presidents all understood, from Washington to Lincoln to Jackson to Teddy Roosevelt, that America must have a strong, vibrant and independent manufacturing base. Has to have it,” Trump said Thursday.

“President McKinley, who felt very, very strongly about this — the country was very, very successful; we actually operated out of cash flow, if you can believe it,” Trump continued. “The protective tariff policy of the Republicans, he said, has made the lives of our countrymen sweeter, and brighter and brighter and brighter. It is the best for our citizenship and our civilization, and it opens up a higher and better destiny for our people.”

In the years after the Civil War, protectionist policies were a mainstay of Republican politics, Time noted, continuing a policy that dates back to George Washington and the Tariff Act of 1789, the first substantive legislation passed by the U.S. Congress.

As the country’s economy has matured, however, tariffs have fallen out of favor — and at times proved downright disastrous. Here are some past tariffs that show Trump may not want to point to history to defend his controversial new policy.

As Trump mentioned in his Thursday remarks, former President William McKinley — known as the “Napoleon of Protection” — did feel “very, very strongly” about tariffs. As a congressman in 1890, McKinley spearheaded a sweeping tariff that raised duties on a range of American-made products by nearly 50% — the highest import barriers in U.S. history.

Though Trump claims tariffs made “the lives of our countrymen sweeter,” the McKinley tariff was actually deeply unpopular, raising prices and lowering the quality of clothing and other goods. It also helped to spur the financial panic of 1893, which saw a decline in the stock market and the closure of hundreds of banks.

“The new tariff bill has made new prices, higher prices on many lines of goods, and where it is pretended — that is the proper word — that you are paying the figures of the ante-McKinley days for the same material, there is a deception; the value is not there; the quality is off and you are getting poorer stuff,” importer Daniel McKeever told the New York Times in 1892.

Republicans in Congress paid for the tariff’s unpopularity at the polls, losing 93 House seats and their House majority during the 1890 midterm elections. The party then went on to lose both houses of Congress, as well as the presidency, in 1892.

Though the use of tariffs declined in the early 20th century, it returned in a big way thanks to the Smoot-Hawley tariff of 1930. That tariff, which Politifact noted was signed into law by President Herbert Hoover primarily for “political reasons” over the objections of more than 1,000 economists, imposed record tariff levels on 20,000 imported goods.

Other countries responded in kind, sparking a trade war much like what many experts are warning about today. Countries around the world raised their own tariffs on exports to the U.S., causing them to decline by 61% from 1929 to 1933, according to the New York Times.

“Other countries also used trade restrictions and protectionism as beggar-thy-neighbor policies to help their domestic economies during the worldwide slump,” Douglas Irwin, a Dartmouth College economist and author of Peddling Protectionism: Smoot-Hawley and the Great Depression and Trade Policy Disaster: Lessons from the 1930s, told Politifact.

“If every country tries this strategy, everyone [is] worse off since one country’s imports are another country’s exports,” Irwin added. “World trade reduced significantly, and since trade barriers are easy to impose and hard to relax, the problem festered for some time.”

Thanks to its effects on the world economy, some historians also contend the tariff factored into the rise of the Nazi party and other fascist groups, as dire economic straits fostered antagonism between countries, sparked more isolationist economic policies and enabled the rise of strongman leaders willing to take extreme steps to improve the economy.

As a result of the tariff’s devastating effects, Congress passed the Reciprocal Trade Agreement Act of 1934. The act gave the president the power to set tariffs for the first time, enabling then-President Franklin D. Roosevelt the power to undo the economic damage that had resulted.

The Smoot-Hawley tariff “was such a disaster that it’s held sway over American trade policy for over 80 years,” Joshua Meltzer, a senior fellow at the Brookings Institution and professor of international trade law at Johns Hopkins University, told the Times. “No one wants to repeat it.”

The 1960s-era “chicken” tax still exists to this day. After European nations placed a tariff on imports of American chicken, the U.S. retaliated in 1963 with a tariff on potato starch, dextrin, brandy (though these were later removed) and most importantly, light trucks.

The tariff led to the collapse of Volkswagen van and truck sales in the U.S., Forbes noted, and though foreign car manufacturers found ways to circumvent the tariff — importing truck chassis for vehicles then adding beds once they were already brought into the U.S., for instance, or simply manufacturing vehicles in the U.S. — the tariff had its intended result of a light truck market dominated by American companies.

Yet the tariff has also had negative effects on the American car companies and consumers. In addition to higher prices and less choice for consumers, the New York Times noted that American auto manufacturers, now shielded from foreign competition, failed to improve the quality of their vehicles, modernize them and reduce costs, sparking a decline that led to the bankruptcy of Chrysler and General Motors.

Trump isn’t the only recent president to impose a tariff on steel. In March 2002, President George W. Bush made his own attempt to save the American steel industry by imposing a steel tariff. The tariff was much narrower than Trump’s current broad tariff, yet the policy was ultimately a failure, lasting only until December 2003.

“I don’t think it was smart policy to do it, to be honest,” Andrew H. Card Jr., Bush’s chief of staff from 2001 to 2006, told the Washington Post. “The results were not what we anticipated in terms of its impact on the economy or jobs.”

According to a 2003 report from the U.S. International Trade Commission, the U.S. economy took a $30 million hit from the steel tariff, and a report commissioned by the steel-using industries hurt by the tariff estimated that the higher steel prices resulted in 200,000 lost jobs in 2002. A separate study conducted by the Peterson Institute for International Economics noted that the tariff had “no economic justification,” projecting that the tariff would cost $400,000 for every steel job saved as well as cause net job losses.

“What we have learned over the years is that protectionism doesn’t protect,” former Secretary of Commerce Carlos Gutierrez told NPR. “Protectionism actually harms.”