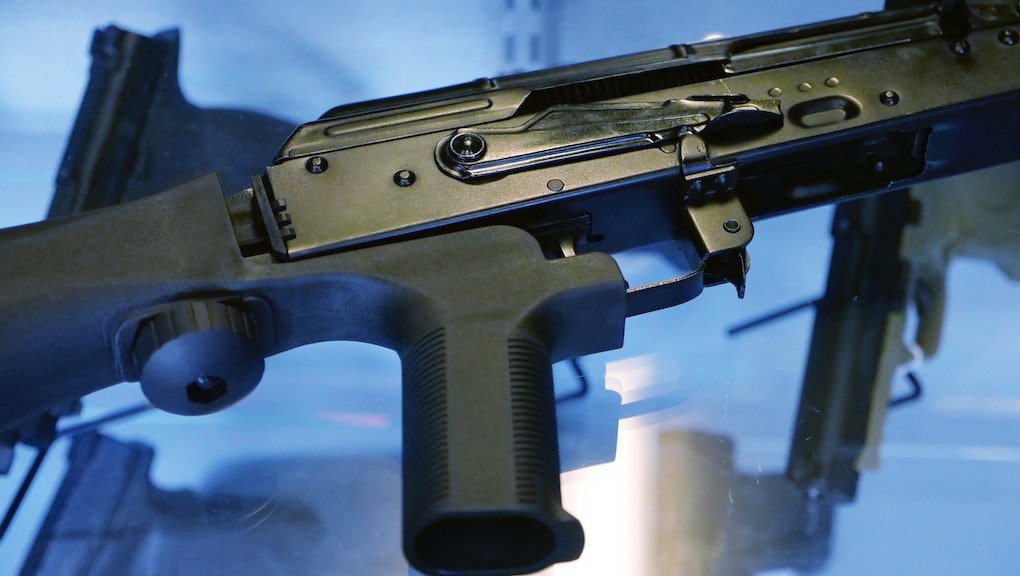 Less than three weeks after Trump called on the Department of Justice to propose a regulation banning “bump stocks” and similar devices, the department has officially taken its first step toward the ban with a new regulatory filing.

The Justice Department officially submitted a notice of a proposed regulation with the Office of Management and Budget Saturday concerning bump stocks, accessories attached to semi-automatic weapons that enable them to mimic the functionality of automatic firearms. In the department’s current view, the notice clarifies, bump stocks are included in the legal definition of a “machinegun.” This would mean the possession, sale and manufacture of the devices are prohibited under federal law, which largely bans automatic weapons.

“President Trump is absolutely committed to ensuring the safety and security of every American and he has directed us to propose a regulation addressing bump stocks,” U.S. Attorney General Jeff Sessions said in a statement. “To that end, the Department of Justice has submitted to the Office of Management and Budget a notice of a proposed regulation to clarify that the National Firearms and Gun Control Act defines ‘machinegun’ to include bump stock type devices.”

The notice will now have to be approved by the OMB, the statement noted, after which the Justice Department will “seek to publish this notice as expeditiously as possible.”

The Justice Department’s new ruling reverses the department’s previous statements on the accessories, which were used in the deadly Las Vegas mass shooting in October. The Bureau of Alcohol, Tobacco, Firearms and Explosives, a division of the Justice Department, was the one to declare the devices as legal in 2010, writing in a letter to leading bump stock manufacturer Slide Fire Solutions: “The stock has no automatically functioning mechanical parts or springs and performs no automatic mechanical function when installed. Accordingly, we find that the ‘bump stock’ is a firearm part and is not regulated as a firearm.”

In the wake of the Las Vegas attack, which sparked a nationwide discussion about banning the devices, Republicans in Congress and the National Rifle Association have pointed to the ATF to regulate the devices, rather than advocating for a legislative approach. The ATF responded by opening a review into bump stocks, calling for public comments in December as the first step in the review process.

Until Saturday’s filing, however, the ATF had maintained that they do not have the power to regulate bump stocks under federal law. Bump stocks require the shooter’s finger to repeatedly hit the gun’s trigger to fire at a high speed, which differs from the legal definition of a machine gun as a firearm that can fire multiple shots “by a single function of the trigger.”

“These accessories DO NOT cause the firearm to shoot more than one shot by the single function of a trigger pull. The notion that ATF chose not to regulate an item it had the authority to regulate is false. The law is very clear and it does not currently allow ATF to regulate such accessories,” Bouchard wrote. “ATF makes rulings based on the statutory authority contained in law and cannot change the law to add new accessories that do not fall within the scope of existing law.”

Because of the department’s continued insistence that it cannot regulate bump stocks, the ATF’s current reversal declaring the devices illegal could pave the way for manufacturers to challenge the new ruling in court, CBS News noted.

Rather than allowing the ATF to take the lead, several lawmakers in Congress have proposed legislative solutions for bump stocks, including both outright bans and stricter regulations on the devices. Several states, including Massachusetts, New Jersey and most recently Washington, have enacted their own bans on the devices in the wake of the Las Vegas shooting, as well as the cities of Columbia, South Carolina, and Denver.

“If ATF tries to ban these devices after admitting repeatedly that it lacks the authority to do so, that process could be tied up in court for years, and that would mean bump stocks would continue to be sold,” Sen. Dianne Feinstein (D-Calif.), a sponsor of federal proposed bump stock legislation, said in a February statement.

“Legislation is the only answer,” she said.