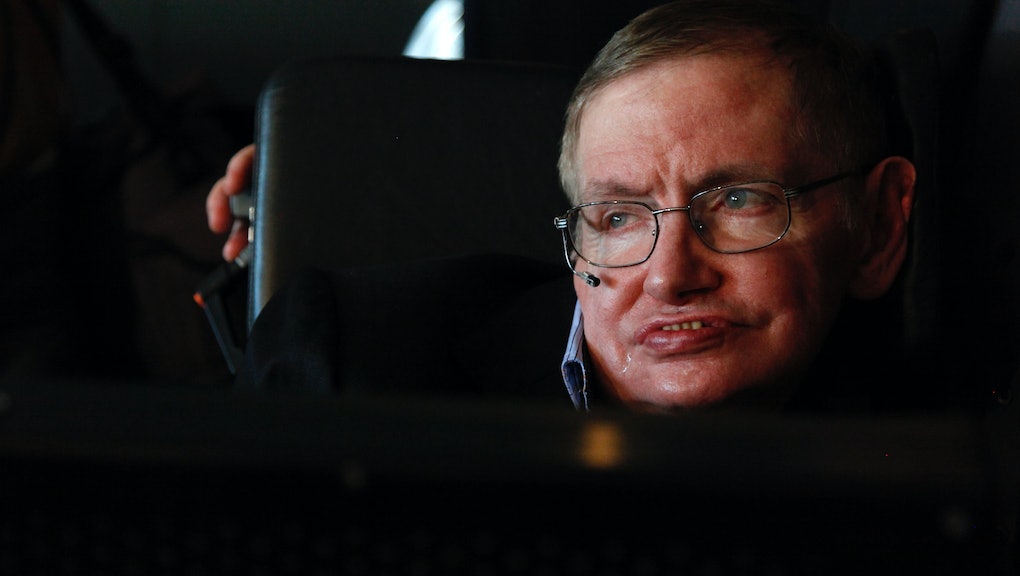 How Stephen Hawking defied the odds with his longevity

Legendary theoretical physicist Stephen Hawking died at the age of 76 on Wednesday, having outlived an initial bleak diagnosis to leave behind an indelible legacy in the scientific world.

Born in 1942 in Oxford, England, on the 300th anniversary of astronomer Galileo Galilei’s death, Hawking studied at Oxford University before moving on to the University of Cambridge for a doctorate in cosmology. At the age of 21, Hawking was diagnosed with amyotrophic lateral sclerosis, a fatal motor neuron disease, and was given two years to live — a sentence he would far surpass.

“He was a great scientist and an extraordinary man whose work and legacy will live on for many years,” Hawking’s children, Lucy, Robert and Tim, said in a joint statement, as quoted by CNN.

“His courage and persistence, with his brilliance and humor, inspired people across the world. He once said, ‘It would not be much of a universe if it wasn’t home to the people you love.’ We will miss him forever.”

Known as one of the longest surviving ALS patients, as the disease typically carries a life expectancy of three years, Hawking’s failing physical condition left him almost completely paralyzed. ALS, the Independent noted, kills off both upper and lower motor neurons that stimulate muscle movement, and only about 10% of those with the disease live more than 10 years after their diagnosis.

Hawking communicated through a voice computer for much of his life, eventually speaking at a rate as slow as one word per minute through movements in his cheek — a slow pace that Hawking said “gave his mind time to drift as the conversation ebbed and flowed around him,” according to the Associated Press.

Experts aren’t sure precisely how Hawking was able to survive so long with the debilitating condition, although many credit the early age at which Hawking received his diagnosis. Though most get diagnosed with ALS between the ages of 40 and 70, the disease progresses more slowly for those who are diagnosed earlier in life.

“The older you are the quicker the disease course tends to be, but we don’t really have a handle on why some people survive for longer periods than others. I wish we did,” Pam Shaw, a professor of neurology at England’s University of Sheffield, told USA Today.

In an interview with Scientific American, Leo McCluskey, medical director of the ALS Center at the University of Pennsylvania, said Hawking’s form of ALS was likely similar to juvenile-onset ALS, which make up “probably less than a few percent” of ALS cases but progresses “very, very slowly.”

McCluskey also noted that even if the disease does progress, life expectancy can be improved if an ALS patient doesn’t have respiratory failure as motor neurons in the diaphragm die, or if they don’t experience the deterioration of swallowing muscles.

“If you don’t have these two things, you could potentially live for a long time—even though you’re getting worse. What’s happened to [Hawking] is just astounding. He’s certainly an outlier,” McCluskey said.

In a 2011 interview with the New York Times, Hawking himself responded to how well he had handled the disease, saying, “Maybe I don’t have the most common kind of motor neuron disease, which usually kills in two or three years. It has certainly helped that I have had a job and that I have been looked after so well.”

“I don’t have much positive to say about motor neuron disease,” Hawking added. “But it taught me not to pity myself, because others were worse off and to get on with what I still could do. I’m happier now than before I developed the condition. I am lucky to be working in theoretical physics, one of the few areas in which disability is not a serious handicap.”

In addition to his work in physics, Hawking was also an ardent defender of the U.K.’s National Health Service, which he credited with saving his life. In December 2017, Hawking signed on to a lawsuit taking on the NHS’ restructuring and addition of American-style accountable care organizations, which the physicist feared would lead to a decrease in resources and the privatization of the health service.

The disease, however, did not stop Hawking’s prolific career; the physicist published more than 230 articles and several books, including the bestseller A Brief History of Time, and became a pop culture icon with appearances on such shows as The Simpsons and The Big Bang Theory.

“I accept that there are some things I can’t do. But they are mostly things I don’t particularly want to do anyway,” Hawking told the AP in 1997, adding with a grin, “I seem to manage to do anything that I really want.”

Richard Green of the Motor Neurone Disease Association, the British term for ALS, told the AP that the physicist had served as a source of inspiration for many battling the fatal disease. Following Hawking’s death, the charity reported on Twitter that its website had crashed due to an overwhelming influx of donations in Hawking’s honor.

Hawking’s scientific pursuits at Cambridge University, where he worked, were marked by a search for a “unified theory” in physics, also known as the “theory of everything.” The theory would unite the contradicting theories of Einstein’s General Theory of Relativity, which concerns the gravity of planets and other large objects, with the Theory of Quantum Mechanics, which is concerned with the much smaller world of subatomic particles.

Though Hawking would later express doubt that such a theory exists, the physicist made a number of scientific contributions over the course of his career. Together with Oxford mathematician Roger Penrose, Hawking discovered that the “Big Bang” that started the universe must have started from an infinitely small point, known as a singularity, the BBC noted. Hawking also determined that black holes radiate energy — now known as Hawking radiation — as they gradually lose mass.

“I think most physicists would agree that Hawking’s greatest contribution is the prediction that black holes emit radiation,” Sean Carroll, a theoretical physicist at the California Institute of Technology, told New Scientist. “While we still don’t have experimental confirmation that Hawking’s prediction is true, nearly every expert believes he was right.”

News of Hawking’s death was met with an outpouring of support for the late physicist, as organizations, politicians, celebrities, colleagues and the scientific community shared their tributes to the scientist’s life and career.

“Astronomers are used to large numbers. But few numbers could be [as] large as the odds I’d have given, back in 1964 when Stephen received his ‘death sentence,’ against witnessing this uniquely inspiring crescendo of achievement sustained for more than 50 years,” Martin Rees, an emeritus professor of cosmology and astrophysics at the University of Cambridge who first met Hawking in 1964, said in a statement quoted by CNN.

“Few, if any, of Einstein’s successors have done more to deepen our insights into gravity, space and time. His name will live in the annals of science; millions have had their cosmic horizons widened by his bestselling books; and even more, around the world, have been inspired by a unique example of achievement against all the odds — a manifestation of amazing willpower and determination.”