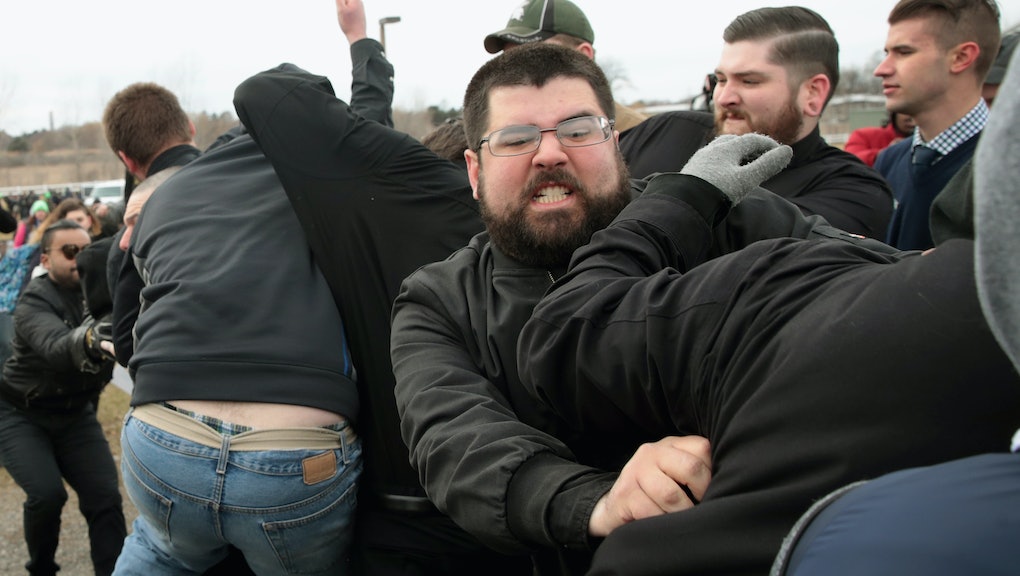 One of the foundational beliefs of white nationalists is that whiteness is under siege by a sexual threat from black and brown men, who will seduce white women and break apart the traditional family structure. But it seems a couple of America’s white nationalists should have looked closer to home.

On Tuesday morning, Matthew Heimbach — one of the country’s most prominent neo-Nazis — was arrested and charged with assaulting his wife, Brooke Heimbach, and his spokesman, Matt Parrott, in Paoli, Indiana. The story involves a sexual sting operation, public embarrassment and revenge that may destabilize the leadership at the heart of a piece American neo-Nazi organizing.

Heimbach, the leader of the Traditionalist Worker Party — one of the largest avowed neo-Nazi groups in the country — might be remembered from footage of the August 2017 “Unite the Right” rally in Charlottesville, Virginia, in which TWP members wore black helmets and Dickies work shirts. Over the past year, Heimbach has coordinated rallies in Kentucky and Tennessee, and were seen outside at one of Richard Spencer’s recent college appearances, fighting with and throwing rocks at protesters.

The other key player here is Jessica Parrott, who is married to Matthew Parrott. Much of the rest of this story is based on a police report, and testimony by the four given to the arresting officer.

Jessica Parrott was, according to the police report, in a three-month sexual affair with Matthew Heimbach. When she said that the affair was over, the Parrotts set up a sort of romantic sting operation for Heimbach, luring him to Parrott’s trailer on Tuesday morning. The purpose of the sting was to see if Heimbach would try to seduce Parrott’s wife again, even though he’d agreed to the end the affair. Matt Parrott and Brooke Heimbach watched through a window from outside, with Parrott standing on a box.

It’s unclear between recorded reports from various parties if Matthew Heimbach and Jessica Parrott either had sex, or just prepared to have sex that day. According to the police report, Heimbach’s wife Brooke fled the scene, and the box Matt Parrott was standing on suddenly broke. At this point, he ran around the trailer to confront Matthew Heimbach, poking him in the chest and telling him to get off his property.

But Heimbach wouldn’t leave. Instead, he put Parrott in a chokehold until Parrott lost consciousness. When Parrott woke up, he tried to kick Heimbach out again. But Heimbach still wouldn’t leave, so Parrott threw a chair at him. Heimbach put him in another choke hold, and Parrott passed out again.

When he woke up again, Matt Parrott took his 4-month-old daughter to a nearby Walmart, where called the police, telling them he’d been assaulted by his “wife and her boyfriend.” After taking Parrott’s statement, the officer travelled to Heimbach’s house, and agreed to wait outside while Brooke put her kids to sleep. While the officer was outside, Heimbach demanded his wife send the police away. But she wouldn’t.

“I refused, he kicked the wall, and then grabbed my cheeks, making them bleed, and then threw me ... into the bed,” Brooke wrote in her battery affidavit. “I have a recording of this.”

The officer then entered the home and instructed Heimbach to come out of the bedroom. He took statements, then transported Heimbach to Orange County Jail.

In the police report, all participants listed their profession as “white nationalist.”

Then, Matt Parrott took his revenge. He regularly wrote fascistic blog posts for the TWP, and apparently helped administer the group’s website. Shortly after Heimbach’s arrest, Parrott took down the TWP site and began destroying all of the digital infrastructure for the organization.

“All of the information systems are completely air-gapped and will be destroyed within a few hours in order to guarantee all membership information literally no longer exists anywhere,” Parrott wrote on Gab, a social media site that’s become a home to Twitter-banned white nationalists.

It’s unclear what will become of the TWP after this schism in its leadership and the loss of their membership rolls.

The drama comes after white nationalist figurehead Spencer suspended all of his public appearances this week, saying that protests against his college speeches have become too extreme and that “antifa is winning.” It’s difficult not to conclude that what remains of the so-called alt-right is falling apart, at least at the level of popular leadership.

Mic reached out to Heimbach on Tuesday night, but was unable to reach him for comment. Parrott gave a brief statement to the Southern Poverty Law Center, the foremost institution tracking right-wing extremism.

Heimbach, who was released Tuesday, is free on a $1,000 bond. A probation hearing is set in Kentucky on June 1, according to the SPLC.