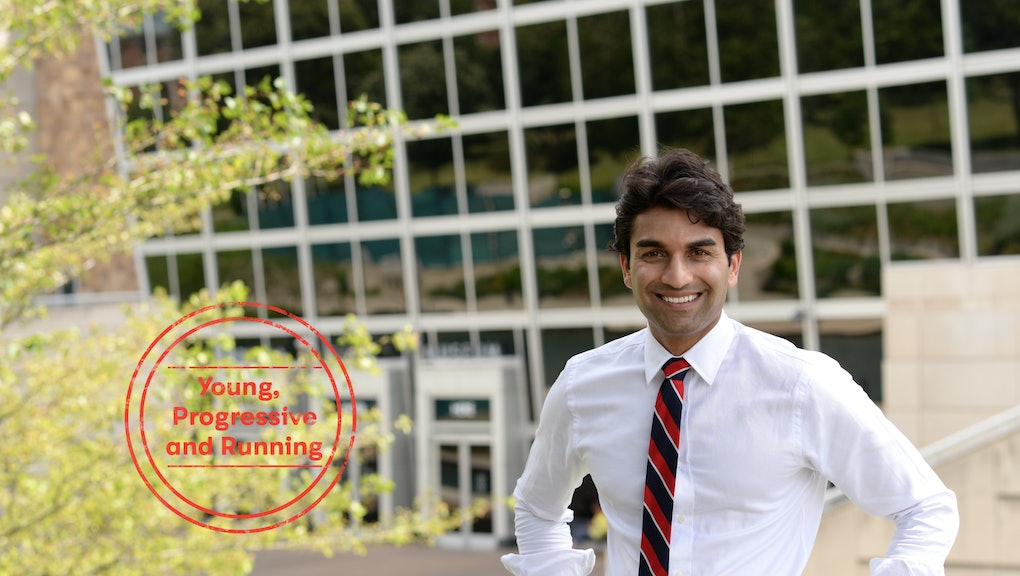 NEW YORK — Suraj Patel knew the challenges of running for Congress against a long-serving incumbent in one of America’s wealthiest areas before he launched his bid to be the Democratic candidate in New York’s 12th district.

For starters, he set up his campaign headquarters in a bar in Manhattan’s East Village, hosting weekly happy hours and opening up the space to local organizers and activists to host events for progressive causes.

Then he hit the streets to build up name recognition one interview at a time. In a campaign video, Patel went across his district conducting man-on-the-street-style interviews with his would-be constituents, asking them if they know who their current member of Congress is.

“If you look at the Democratic seats, they have a guaranteed win in this area,” one man tells Patel in the video. “And so they don’t really have to do much.”

It was exactly that sentiment that led Patel to the decision challenge incumbent Democratic Rep. Caroline Maloney in the Democratic primary for New York’s 12th district, which is made up of multiple neighborhoods on Manhattan’s east side, the Brooklyn neighborhood of Greenpoint, parts of western Queens and Roosevelt Island.

“You can’t be in office for 25 years and pretend you’re not part of the problems we face today, or you had nothing to do with the problems you face today,” Patel told Mic in an interview at his East Village campaign office.

“Democrats have had power multiple times, and they’re still facing a massive incarceration problem in this country that puts 1 out of every 6 black males in prison by the time they’re 30,” he added. “We still face little to no action on climate change. We still have no comprehensive immigration reform that brings 12 million Americans out of the shadows, 12 million people out of the shadows and into society.”

So far, his approach appears to be working. In the past several months Patel has out-raised Maloney, taking in nearly $550,000 in eight weeks. He is on his way to nearly matching Maloney’s campaign in cash on hand with $450,000 compared her $641,000.

He’s also attracted a wealth of talent for his campaign, with former members of both the Hillary Clinton and Martin O’Malley presidential campaigns working on his staff.

Unlike many progressive challengers, Patel hails from the business community. He is the president of the Indiana-based hotel company Sun Group, and a professor of business ethics at the NYU. He’s also an Obama veteran, having worked on the advance teams for both of the former president’s election campaigns.

But Patel wasn’t raised a member of America’s elite. Born in Mississippi to Indian immigrants, he spend a lot of time in his parent’s Mexican restaurant that they built on the grounds of a burned down seafood restaurant.

Patel claims the decision to open a restaurant that serves Mexican food in 1980s Mississippi, instead of one that served their native Indian cuisine, was the first of many savvy business decisions that put his family on the path to success.

At a young age, his parent’s moved to Indiana, where they first bought a small motel that would later grow to become a much larger chain of hotels and hospitality services. The experiences his family shared of their journey to the U.S. helped shape Patel’s views on one of the most contentious issues of the Trump era: immigration.

“My family moved to the United States about 10, 15 years before I was born,” he said. “Actually, my great uncle moved to America in 1960 and over the course of every couple of years, he was able to sponsor his brother, his wife, etc. — literally as they call it now, ‘chain migration.’ I’m the end of a line of ‘chain migrants’ — also known as a fucking family.”

A strong opponent of the president’s immigration policy, Patel’s gone further than most other candidates in 2018 by calling on Congress to defund Immigration and Customs Enforcement.

“I was the first candidate for Congress in New York state who called for the defunding of ICE,” Patel said. “ICE is supposed to be a customs enforcement agency. It should be at the borders and not in our city.

“I’m for funding it only for it’s actual mission, which ought to be [as] a customs enforcement agency,” he continued. “It should be a border patrol thing. ... It doesn’t make us safer that Trump’s mass deportation squad goes through 50 states of impunity.”

Calls for defunding or abolishing ICE have grown among progressives, who see the agency as a rogue and unaccountable deportation force, emboldened in the Trump era. Progressive candidates like Dan Canon in Indiana’s 9th congressional district and Antoinette Sedillo Lopez in New Mexico’s 1st district have joined Patel in calling on Congress to pull funding from the agency.

Sean McElwee, a progressive commentator who has been a leading voice in the “abolish ICE” movement, told Mic that he thinks districts like New York’s 12th are where this case should be made.

“Safe-district Democrats shouldn’t be voting to fund a campaign of ethnic cleansing,” McElwee told Mic. “It’s time for Democrats to make real demands: at a minimum, no more money for ICE, for detention, for the border wall. It’s time for real oversight.”

“Donald Trump is a racist president; that’s obvious,” he said, describing the president’s position toward immigrants from non-majority-white countries. “But he’s only using the tools Congress gives him, so Congress can take that away or at least bring him to the negotiating table.”

But even as Patel continues to gain traction among progressives, he has already faced some challenges. His campaign has already come under fire after the conservative-leaning New York Post dug up several controversial Facebook posts from his past.

Six years ago Patel posted a photo on Facebook of himself with Olympic gymnast McKayla Maroney, adding the joke caption, “We went to Top Shop. I bought a promise ring. Then they tried to arrest me.”

At the time, Patel was around 28 years old, and Mahoney was 16. A comment under the post from Patel that same day walked back the joke, saying that he had actually told Maroney she should “come to New York because we have a top shop [sic] there on Broadway.” He admitted he may have “crossed the creepy line by a little.”

Maroney has since testified about being sexually abused by Dr. Larry Nassar around that same time, though that information was not public at the time the original Facebook post was published.

The Post also attempted to draw a connection between that picture and a another Facebook post in from 2010. In the second instance Patel commented on a friend’s post linking to a false article about actor John Stamos allegedly engaging in a sexual relationship with a 17-year-old girl. The comment read “Dude, she was 17 — that’s not that bad. Have mercy!”

Patel says that this post had been an inside joke between friends about his having recently dressed up as Stamos for Halloween. “Have mercy!” was the catchphrase of Stamos’ character on the television show Full House.

While many candidates might want to avoid talking about these sorts of embarrassing flubs from their past, Patel addressed the issue head-on. Attempts to smear him with the old posts were part of a broader attempt to keep younger generations who grew up with social media from running for office, he said.

“One of the biggest things I hear when I tell people I’m running for Congress or office in our generation is, ‘Oh my God. I can’t believe you’re doing that. I could never do that because of my social media,’” Patel said.

“Our entire generation grew up basically publicly having vast conversations with lots of people and it can not be disqualifying for an entire generation of people to run for office because the establishment does the exact same tired tricks,” he added.

Encouraging younger generations to seek higher office is the key to revitalizing the Democratic party and bringing new ideas to Congress, Patel said. He has taken inspiration from the teenage survivors of the Parkland, Florida, school shooting, who he says have done more for gun control in recent weeks than Congress has in the past 25 years.

“Do you know what Alexander Hamilton, John Marshall, John Trumbull, Marquis de Layfette and Aaron Burr all have in common? They were all under the age of 21 at the signing of the Declaration of Independence,” Patel said.

“The average age of the mission control engineers at NASA during Apollo 11 is 28 years old. The most remarkable things in this country’s history or in human history have happened when a group of young people decided that the status quo is no longer sufficient.”