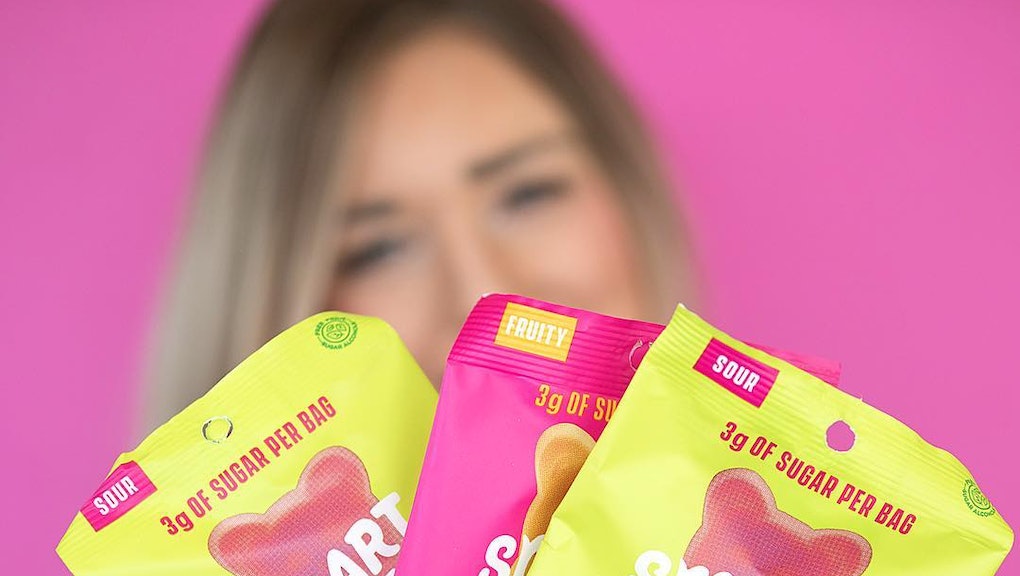 In 2017, Halo Top became the best-selling pint of ice cream in America, surpassing freezer-aisle staples Ben & Jerry’s and Häagen-Dazs. The brand’s climb to the top is pretty astounding, considering Halo Top’s “ice cream” is less caloric, less creamy and often more costly than the traditional stuff. The success is reflective of a shifting desire in America’s dietary culture.

SmartSweets, a new candy brand whose first product is a lower-sugar gummy bear, hopes to hop on that culture-shift train and become “the Halo Top of candy,” 23-year-old founder Tara Bosch said in an interview. In early March, the brand secured a partnership with Whole Foods, landing on shelves in every store nationwide.

What makes SmartSweet’s gummy bear different? Using Stevia and fruit and vegetable juices for flavor and color, a one-bag, 90-calorie serving contains three grams of sugar, no added sugar and a whopping 28 grams of fiber, which comes from tapioca and chicory root. Mainstream gummy bears rarely have fiber — a nutrient that, depending on its source, can regulate digestion, maintain blood and cholesterol levels and help satiate the appetite.

In a taste test, the majority of Mic staffers who tried the bears were delighted by them. A little chewier than the standard gummy, many said they would be happy to eat these over the sugar-packed versions. The sweet version tastes similar to its main ingredient: Stevia.

At a time when sugar’s seen as the enemy — some of which is indisputably warranted — a low-sugar alternative should be well-received. But Stevia, SmartSweet’s source of sweetness, has its own set of controversies, including the possibility that the substitute may lead to overeating.

“Stevia is a sweetener I am really proud to use, because it’s free from sugar alcohols and is plant-based,” Bosch said, acknowledging the sugar alternative is not perfect. “If there’s a sweetener beyond Stevia that seems like a good fit, we’d definitely be open to it. We’re always looking at what’s next and best for the consumer.”

Where SmartSweets most prominently stands out, however, is in its marketing. The packaging capitalizes on today’s anti-sugar campaign with the slogan, “kick sugar, keep candy,” suggesting to the consumer that the two are not mutually inclusive.

Bosch said that when she really got to working on her brand, she was surprised to discover the confections market hadn’t seen true disruption for generations. Her goal in making a candy without much sugar isn’t to promote an unhealthy diet culture, but to keep America’s candy traditions alive in a more healthful way.

“There are all of these traditions in our culture tied to sugar and candy,” Bosch said, citing sweets-focused holidays like Easter and Halloween. “For parents, it’s not about not giving your kids that joy in experiencing those traditions; it’s about making those healthier swaps for them and helping them create a healthier relationship with food.”

This is one of the reasons consumers won’t see typical diet buzzwords on SmartSweets’ packaging. They aren’t dubbed “guilt-free” because Bosch doesn’t want to perpetuate the idea that eating certain foods should induce guilt. They’re not called “skinny bears” because Bosch said body shape should have nothing to do with a person enjoying what they’re eating.

“We’re all about empowering people, and we don’t define what the empowerment means for people,” Bosch said. “We just want to remove the blanket that [the] diet industry has created about feeling bad about what you’re putting in your body.”

Bosch said she hopes consumers can eat a bag of SmartSweets at any point in the day — even for breakfast, if they so choose.