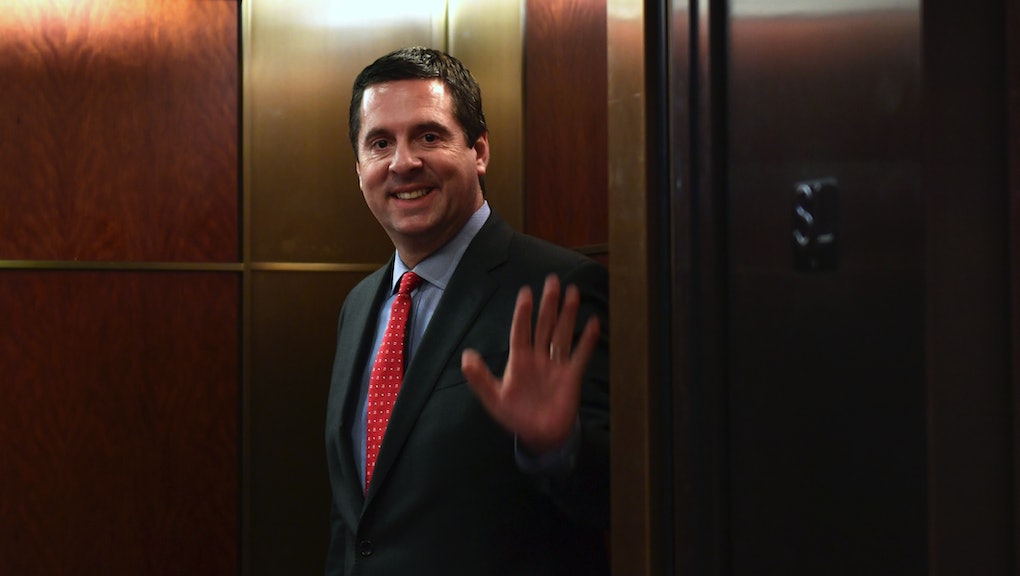 “They tanked it from the beginning”: How Republicans hijacked the House Russia probe

Five days into Donald Trump’s presidency, the two top congressmen on the House Intelligence Committee released a joint statement announcing that the panel would be investigating Russia’s interference in the 2016 United States presidential election.

Its mandate was to conduct a bipartisan inquiry into the Kremlin’s activities in the election, the U.S. response to those activities and “links between Russia and individuals associated with political campaigns.”

“This issue is not about party, but about country,” Reps. Devin Nunes (R-Calif.) and Adam Schiff (D-Calif.) said in the statement. “The Committee will continue to follow the facts wherever they may lead.”

But almost immediately, it became apparent that Republicans on the committee would inject partisanship into the probe, according to Rep. Mike Quigley (D-Ill.).

“It was not their intention to be serious,” Quigley said in a phone interview on Wednesday. “It was to keep the witnesses safe from any kind of serious questioning.”

On Monday, Republicans killed the House Intelligence Committee’s Russia probe, announcing that after more than a year of investigation, the panel had found “no evidence of collusion, coordination or conspiracy between the Trump campaign and the Russians.”

But Democrats on the committee have railed against that conclusion. Republicans prematurely ended the investigation, the Democrats say, and the reason they didn’t find evidence of wrongdoing by the Trump campaign was because they were never really looking in the first place.

“[The Republicans] took orders from the White House,” Quigley said. “They tanked it from the beginning.”

“Flawed from the start”

In 2016, Russia conducted a cyber campaign to undermine faith in American institutions and to “denigrate” Democrat Hillary Clinton, U.S. intelligence concluded in a report released to the public in early 2017, just weeks before Trump’s inauguration.

Then-President Barack Obama had been struggling to respond to Russian President Vladimir Putin’s meddling and, in the waning days of his presidency, hit the Kremlin with sanctions.

Meanwhile, four committees and agencies had opened investigations into the matter. The FBI, then led by James Comey, was looking at the activities of Russia and the Trump campaign for possible criminal activity. The Intelligence committees in the House and the Senate, as well as the Senate Judiciary Committee, started similar inquiries, in the interest of determining what happened in 2016 and how future elections could be safeguarded.

While the three Capitol Hill investigations had shared goals, the House panel seemed to be publicly plagued by partisanship and drama in a way the other two were not.

Rep. Eric Swalwell (D-Calif.), one of the Democrats on the committee, said in a phone interview on Tuesday that he had initially been optimistic that the probe could be conducted in a bipartisan manner.

Then came Comey’s March 20 testimony before the panel.

Comey, then the FBI director, confirmed in the hearing that the FBI was investigating Trump and his associates as part of the federal Russia probe. He also debunked the president’s baseless claim that Obama had been “wire-tapping” Trump Tower during the 2016 race.

The next day, Nunes, the chairman of the committee and a member of Trump’s transition team, visited the White House grounds. On March 22, he announced that “the intelligence community incidentally collected information about U.S. citizens involved in the Trump transition” — seemingly backing up the president’s tweets.

According to Swalwell, Nunes’ actions after the Comey hearing were the “first smoke bomb.”

“Rather than understanding the gravity of [Comey’s testimony], and answering the serious questions that it posed, Republicans chose to protect the ballot box,” Swalwell said.

Nunes was quickly criticized by Democrats on the committee, including Schiff, the panel’s ranking member. He accused Nunes of acting to protect the president.

“The chairman will need to decide whether he is the chairman of an independent investigation into conduct, which includes allegations of potential coordination between the Trump campaign and the Russians,” Schiff said at the time, “or he is going to act as a surrogate of the White House.”

Amid mounting pressure over ethics concerns, Nunes announced in April 2017 that he would be “temporarily” recusing himself from the investigation. He put Rep. Mike Conaway in charge on April 6.

But by the summer of 2017, Nunes began issuing subpoenas related to the Russia investigation as part of his examination of the alleged “unmasking” of Trump campaign officials in intelligence reports. He was accused in October 2017 by Fusion GPS — the firm behind the controversial Steele dossier — of conducting a “rogue inquiry.”

Over the last year and change, Republicans derailed Democrats’ efforts to properly conduct the investigation, Quigley and Swalwell said in interviews. The majority on the committee refused to issue subpoenas, failed to adequately press witnesses during hearings and focused on unrelated issues, such as the controversial Obama-era Uranium One deal that Trump and the GOP have used in attacks on Clinton, the former secretary of state.

For Democrats and government watchdogs, the actions of Nunes and Republicans on the committee undermined the legitimacy of an investigation that was “flawed from the start.”

“We believe that it clearly became problematic as soon as it became clear that Nunes was running back to the White House,” Danielle Brian, executive director of the Project on Government Oversight, said in a phone interview. “That became a painful moment in the investigation. That was such an abdication of his role as the chairman of the committee.”

“It was so clearly a disaster”

The acrimony began to reach a fever pitch at the end of 2017. In December, Schiff publicly expressed concern that Republicans were planning on shutting down the House Intelligence probe by the end of the year, in spite of the “important progress” the panel was making.

Schiff said that his Republican counterparts had refused to issue subpoenas necessary to the investigation, declined to contact some witnesses and had not scheduled any hearings related to the probe beyond 2017.

“It appears Republicans want to conduct just enough interviews to give the impression of a serious investigation,” Schiff said.

The drama continued into the new year, as Trump’s allies latched onto a controversial memo by Nunes in an attempt to undermine special counsel Robert Mueller’s FBI probe, which had already brought down several members of the president’s campaign team.

Republicans in January had hyped the four-page report, characterizing its allegations as being “worse than Watergate.” But the FBI expressed “grave concerns about material omissions of fact that fundamentally impact the memo’s accuracy,” and argued against its release.

Nevertheless, in early February, Trump authorized the release of the memo and it was made public. The memo — which alleged that federal law enforcement had abused the Foreign Intelligence Surveillance Act in obtaining warrants to surveil former Trump campaign aide Carter Page — quickly became a weapon for Trump and his allies to attack the Mueller probe, which the president called an “American disgrace.” Trump also tweeted that the memo vindicates him in the Russia probe.

But the Nunes memo was criticized by experts as being misleading, with the report failing to provide key information. “This is advocacy, and not particularly sophisticated advocacy,” former federal prosecutor Patrick Cotter told said at the time. “Not impartial legal analysis.”

Democrats — who blasted Nunes for releasing the memo — sought to rebut the Republican report. But Trump blocked them, arguing that their response memo was “very political and long.”

Top Democrats blasted the Trump administration’s move as hypocritical, with Schiff criticizing the president for releasing the “deeply flawed and inaccurate” Nunes memo.

When on Feb. 24 Democrats finally released a heavily redacted version of their memo, which said investigators had “failed to uncover any evidence of illegal, unethical or unprofessional behavior by law enforcement,” Trump bashed it as “totally fraudulent.”

If the panel had been beset by partisanship for more than a year, at this point its investigation now seemed irrevocably broken.

Rep. Tom Rooney (R-Fla.), a member of the committee, said the political chaos on the committee had torpedoed the investigation.

“I want [the House investigation] to end because we have gone off the rails of being able to objectively do our job,” Rooney said on March 2.

With the committee’s investigation on life support, it continued to conduct high profile interviews. The most notable one of these was, perhaps, with White House communications director Hope Hicks — who announced she was leaving the administration the day after her closed-door hearing with the panel.

But it became increasingly clear that the House Russia investigation was imperiled, and on Monday Republicans announced they were concluding it.

“It was so clearly a disaster,” Brian said.

“Our work will continue”

While the U.S. intelligence community found that Russia had meddled in the 2016 with a “clear preference” for Trump, Republicans on the House Intelligence Committee concluded that the Kremlin did not specifically interfere with the intention of aiding Trump, according to an outline of the panel’s initial findings released this week.

House Republicans also announced that they had not found any “collusion, coordination or conspiracy” between the Trump campaign and Russia. But Democrats say that the investigation had been moving toward the exact opposite conclusion, with Schiff saying in a PBS interview Tuesday that the committee had uncovered “significant evidence” of collusion.

The Democrats now plan to release a counter report.

“The collusion is hiding in plain sight,” Quigley said, citing the infamous 2016 Trump Tower meeting between high-ranking members of the Trump campaign and a Kremlin-connected attorney who supposedly had dirt on Clinton.

But the purpose of the Mueller investigation is to determine if there was any criminal behavior on the part of Trump and others that he’s been scrutinizing since his appointment in May 2017. It’s the job of the congressional investigations to safeguard U.S. elections against foreign interference.

“[The Mueller probe] doesn’t help us figure out what weaknesses are in our electoral system to keep this from happening,” Brian said. “That’s the Congress’ job.”

“This is not just an academic exercise,” Brian added. “The purpose is to figure out what reforms are necessary to ensure that this kind of meddling doesn’t happen in the future.”

The failure of the House Intelligence probe could make that harder to do. The conclusion reached by Republicans on the committee — which Trump cheered on Monday with an all-caps tweet — could also serve to muddy the waters and sow doubt in the three continuing investigations.

Nunes and Rep. Mike Conaway (R-Texas), who has overseen the committee’s investigation since the chairman’s temporary recusal, did not return requests for comment. But in an interview with Fox News this week, Nunes defended Republicans for ending the probe, saying there was “no reason to continue” it because it had not uncovered evidence of wrongdoing by Trump or his campaign.

On Tuesday, Democrats released a 21-page report arguing that Nunes had concluded the investigation with key witnesses uninterviewed and important threads unresolved. “Our work will continue,” Schiff tweeted Tuesday.

Yet, despite the vows to press on, there appears to be a sense of frustration among Democrats on the committee.

The weekend before the investigation ended, Swalwell passed time on a train ride reviewing old text messages he’d exchanged with his Republican colleagues in the winter of 2017. In the messages, he had discussed the need for an independent investigation, and had felt hopeful that the committee would fulfill its bipartisan promise.

“I couldn’t help think how naive I was to think that they would work with us,” Swalwell said. “That we could unite.”