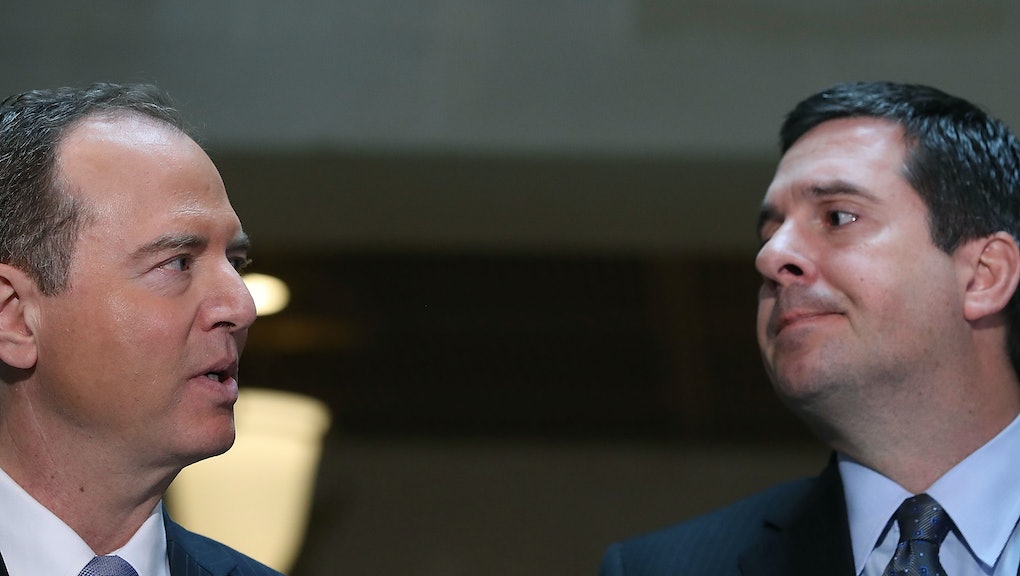 This week in Trump-Russia news: The House investigation melts down, raising the stakes for Mueller

The House Intelligence Committee has concluded its Russia probe.

Rep. Devin Nunes (R-Calif.), the committee chairman, announced on Monday that the investigation has ended — and that the panel found no evidence that President Donald Trump or his campaign had colluded with the Russians.

That’s not what the Democrats on his committee say, though.

They’re accusing him of prematurely finishing the probe and of seeking to protect the president.

Here’s what you need to know about the late House Intelligence investigation and what it means for the ongoing Trump-Russia saga going forward.

Republicans on the House Intelligence Committee announced on Monday that the panel “found no evidence of collusion, coordination or conspiracy between the Trump campaign and the Russians.”

Further, the Republicans contradicted the United States intelligence community’s assessment that Russia had interfered in the 2016 presidential election in favor of Trump.

The president seemed enthused about the conclusion, tweeting out the committee’s findings in all-caps.

“THE HOUSE INTELLIGENCE COMMITTEE HAS, AFTER A 14 MONTH LONG IN-DEPTH INVESTIGATION, FOUND NO EVIDENCE OF COLLUSION OR COORDINATION BETWEEN THE TRUMP CAMPAIGN AND RUSSIA TO INFLUENCE THE 2016 PRESIDENTIAL ELECTION,” Trump tweeted Monday evening.

Democrats push back against Trump and Nunes

But Democrats on the committee have bashed Republicans for ending the investigation, saying it showed their counterparts never had any interest in conducting a bipartisan probe.

“They tanked it from the beginning,” Rep. Mike Quigley (D-Ill.) said on Wednesday.

Democrats also contradicted the Republicans’ conclusion that there was no evidence of cooperation between the Trump campaign and the Russians, with Rep. Adam Schiff (D-Calif.) saying investigators have uncovered “significant evidence” of collusion.

“The collusion is hiding in plain sight,” Quigley said.

Democrats say they plan to release their own report contradicting their Republican colleagues and that they plan to continue their work.

In a Washington plagued by overwhelming partisanship, the failure of the House Intelligence investigation raises significant questions about what the other Capitol Hill investigations will be able to accomplish.

Mueller’s investigation, on the other hand, has continued to move at a steady pace. He has continued to gain ground on two of the main threads of his probe: the question of collusion between Trump and the Russians, and the possibility of obstruction of justice on the president’s part. In recent weeks, he has apparently learned more about Trump ally Roger Stone’s contacts with WikiLeaks and subpoenaed the Trump Organization for documents related to Russia. Additionally, he has reportedly obtained notes taken by Andrew McCabe about his interactions with the president.

But he may also be increasingly imperiled following the deputy FBI director’s ouster Friday.

John Dowd, Trump’s personal lawyer, called for the Mueller investigation to be killed in the wake of McCabe’s firing, saying in a statement on Saturday that deputy Attorney General Rod Rosenstein should “bring an end to alleged Russia Collusion investigation manufactured by McCabe’s boss James Comey based upon a fraudulent and corrupt Dossier.”

But Democrats have pushed back, calling on their colleagues on Capitol Hill to pass legislation safeguarding the special counsel against potential threats by the president.