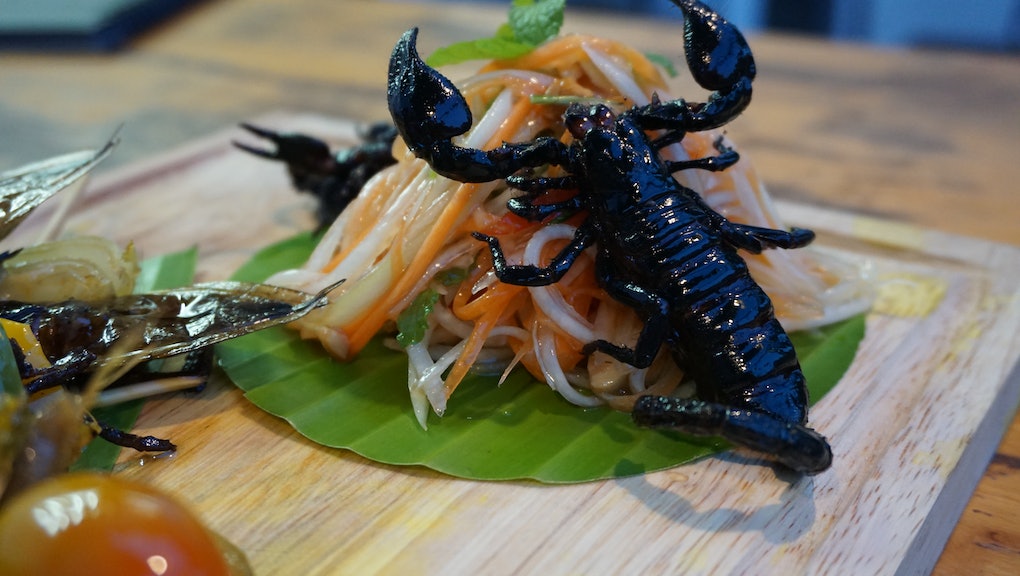 Tarantulas, fire ants and other bugs go from street food to gourmet dishes in Cambodia

Old men fry tarantulas in chili oil. People snack on crispy grasshoppers like they would a bag of Cheetos. Buckets of crickets, grasshoppers and giant water bugs lay next to yams, cilantro and curry leaves in the intimidating culinary scene of Cambodia’s markets.

Mork Mengly, the head chef at Pou, Siem Reap’s trendy, haute Cambodian street food fusion restaurant, stands above a basket filled to the brim with red ants crawling atop their larvae. “We use red ants as sour,” Mork Mengly, who is known as Pou — or “uncle” — among the local vendors, said while sampling some sweet basil.

The sour, he said, is from “the anger.” Red ants bite you. You bite it back. And people realize it’s sour.”

This sourness is the basis for many Cambodian street foods. It pairs perfectly with prahok, a fermented fish paste, mixed with sugar, chilies and lime, which seems like it could be the ranch dressing of Siem Reap. Khmer men and women can be found dipping barbecued pork, cucumbers, okra or boiled flowers into the aromatic dressing. The ants also bring street-side stews to life, where they’re dumped into curries like sprigs of cilantro. Some enjoy the critters straight up as a cooling compliment to a hot day.

There’s a long tradition of insects as food in Cambodia. During the famine created by the late 1970s Khmer Rouge regime, bugs became a crucial “hunger food” for Cambodians who survived off tarantulas, crickets, grasshoppers and silkworms for years. Nowadays, the bug diet has resurged thanks both to cryptic nostalgia and the insects’ cheap and plentiful source of proteins and micronutrients. The United Nation’s Food and Agriculture Organization refers to bugs as “six-legged livestock,” and the way these insects taste confirm the label: Crickets fried in sesame oil taste something like roasted chicken skin — salty, crunchy and a tad nutty. Water bugs are shockingly meaty once you’re able to bite through the roach-like exoskeleton. And fried tarantulas are so popular, they’ve become an expensive delicacy like caviar.

This all might sound mad to many “Barang” (the term for non-Cambodian), but insect-eating has attracted a handful of Cambodian chefs who aim to elevate this street food into a trendy and upscale cuisine.

At the market, Mork Mengly grabs a bag full of red ants for his first main course listed on the night’s menu, a Kulen mountain sausage and pork belly with a banana leaf salad and tree ant dressing. The tree ant dressing is merely a spoonful of uncooked, unseasoned ants to add sourness to a salty dish — think of the ants like a squeeze of crunchy, gritty lime.

He grabs more ants for his lunch, veggies with fire ants and prahok along with an ant-filled pork soup. This is just “typical street food,” as he describes it. Five-star street food is probably a more apt description, considering he won top honors at the Street Food Festival of Siem Reap.

Mork Mengly mashes chilis, palm sugar, garlic and lime juice into the raw, fermented fish. Then he adds a cup of ants and begins melding the ingredients together with two knives. Flies immediately swarm the concoction, and the smell can only be described as stale tilapia with an element of blue cheese — beyond stinky.

“That’s how you know it’s fresh,” said the chef. “If there were preservatives in the fish, the flies would avoid it.”

The creation is completely unexpected and alarmingly flavorful, with flavor like a creamed salt with an element of fishiness that’s mostly overpowered by the raw chilis, garlic and sour ants. The closest comparison would be a tomato-less, fish-tinged salsa.

It’s these types of flavor profiles and reinterpretations of Cambodian street fare that’s earned Mork Mengly praise both in his homeland and abroad. He’s currently promoting the country’s cuisine across Southeast Asia. He also houses chefs from around the world who spend their vacations under his tutelage at Pou rather than the nearby temples of Angkor Wat.

“We want people to feel free to scream and laugh. When you’re too fancy, people are afraid to show emotion.”

At Bugs Café, also in Siem Reap, there’s a similar, albeit more graphic, iteration of insect-driven dining, where a platter of insect skewers, scorpion salad, silkworm croquettes, stir-fried crickets and tarantula three ways (donut, crisped and chili-coated) sits on the table. With the cheerful music of Louis Prima in the background, the whole display is a bit like the beginning of an unsettling scene in a Quentin Tarantino film.

“We want people to feel free to scream and laugh,” said co-owner Davy Blouzard, a chain-smoking Frenchman who sees his job less as a restauranteur, more as an insect ambassador. “When you’re too fancy, people are afraid to show emotion.”

His menu features an array of French-infused Khmer classics like wok-fried crickets and silkworms, which can be prepared spicy, Szechuan-style or in a Mediterranean fashion, with olive oil, basil, garlic, parmesan, parsley and cashew nuts. Blouzard reckons this single dish can turn anyone into an entomophagian — someone who eats insects. His biggest seller, though, is the tarantula donut. Battered, deep-fried and served with a mango chutney, it’s reminiscent of a crab cake — and surprisingly meaty for an arachnid no bigger than a business card.

“The point is really to stick to Cambodian culture,” Blouzard said. His staff is entirely Cambodian, and head chef Seiha Soeun, though French-trained, sticks to his Cambodian roots. While it’s Souen’s first time cooking with bugs, his insect obsession has led him out of the kitchen and on weekly hunts through the jungle in search of tarantulas and scorpions, which he brings back to the restaurant, still alive.

“They’re not dangerous,” said Blouzard about keeping live tarantulas and scorpions in his restaurant. “No fangs.”

That doesn’t make the spiders any less frightening. Some kitchen accidents have sent the spiders into the dining room, creating a scene that further terrifies customers.

“We don’t want to put stress on the challenge [of making bugs appetizing]” said Blouzard, as he poured a few shots of his homemade scorpion moonshine — an intoxicating concoction of seemingly pure alcohol, chilies, lime with a scorpion swimming in the bottle — for an aperitif. “We want to show it’s like any other food.”