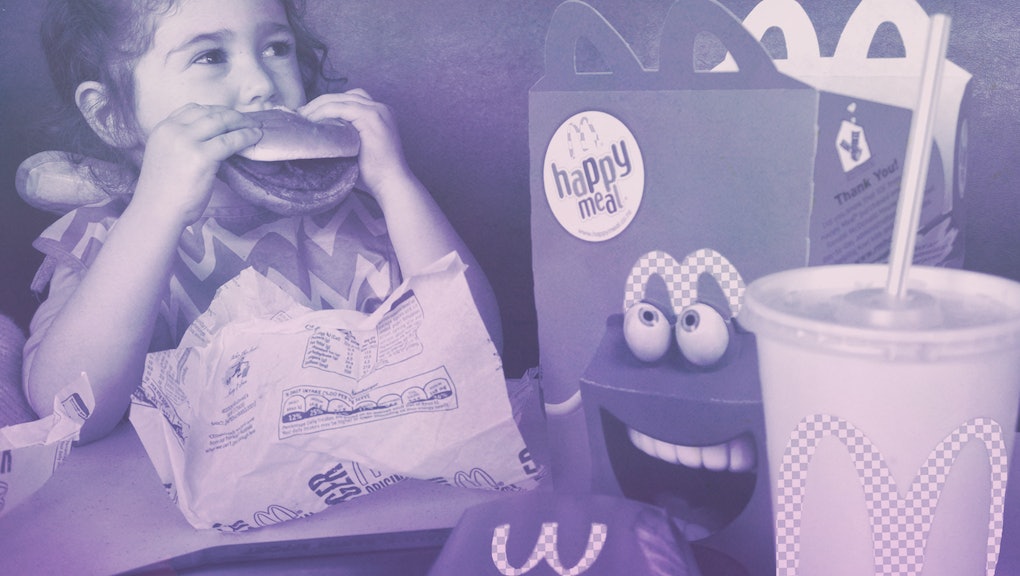 What If We Didn’t... advertise food to children?

Can you think back to the first time you heard this little ditty? The McDonald’s jingle debuted in 2003, crooned by newly solo artist Justin Timberlake. As McDonald’s longest running ad campaign, you may have first heard it as a kid but still remember it 15 years later. If so, the commercial did its job.

Featuring a catchy jingle with a popular artist is just one tactic food companies employ to turn consumers into lifelong customers. The food industry has spent billions of advertising dollars to intrigue these individuals, ideally while they’re young and impressionable.

The ethics of advertising anything to children has been long debated; a 1986 study looked at kids’ cognitive responses to advertising, finding younger kids were much more susceptible to advertising. Part of the problem with this marketing is that kids get hooked on food that isn’t great for them. Approximately 1 in 3 American children and teenagers is overweight or obese (mirroring the ratio of their adult parents), and research has shown junk food advertising contributes to the issue. Today, experts continue to study the practice of bombarding kids with food advertisements.

Should foods be marketed to kids?

While any person watching television is at risk of craving whatever food they see advertised during commercial breaks, children are more impressionable than adults on this end. Many argue it’s this very vulnerability that makes it unethical to market food to children. The state of health and business in the United States as we know it might look very different if we never allowed food advertising on TV in the first place. While food marketing isn’t limited to TV, it’s where most of the comprehensive research has been done on the subject.

“Marketing to kids is inherently unethical because of that inability to discern between marketing and reality and that whole concept of getting around the parent,” Taylor Billings, press officer for nonprofit organization Corporate Accountability, said in an interview. Billings also noted how McDonald’s has reportedly referred to parents internally as the “gatekeepers” to its success.

Marketing aimed at kids has been shown to be insidious: One 2007 study from researchers at Stanford University’s School of Medicine and Lucile Packard Children’s Hospital found that children between the ages of 3 and 5 believed food tasted better when it was branded as McDonald’s. The study also showed that kids with more TVs in their homes and those who ate at McDonald’s more frequently were more likely to prefer food from a McDonald’s wrapper or bag than the exact same food without the brand’s logo.

Two other studies published in the journal Psychology & Marketing in 2010 concluded that children as young as three “have emerging knowledge of brands that are relevant in their lives,” helping to explain the aforementioned kids’ preferences for chicken nuggets branded with the famous “golden arches” versus identical chicken nuggets with unbranded packaging.

How other countries regulate food advertising

Fast-food advertising and the impact associated with it is a global issue. Outside of the U.S., stricter regulations prevent brands from inching into kids’ brains at such a young age.

In Ireland, for example, it’s illegal to broadcast ads for products high in fat, salt and/or sugar to children age 18 and under. In the U.K., ads promoting food and drink with high levels of those same ingredients are prohibited from being aired in or around TV programs geared toward viewers under the age of 16.

Quebec passed a law in 1980 that banned junk-food marketing in print and digital media to kids under 13 years old. The province has some of the lowest childhood obesity rates in Canada; by one estimate, the ban led to a 13% reduction in fast food spending per week.

Kids in Mexico see more ads for junk food — 12,000 a year — than those in any other country, the Economist reported in 2013. The following year, Mexico implemented new guidelines to restrict TV ads for “high-calorie food and soft drinks” to help fight obesity. The rules prevented such ads from airing between 2:30 p.m. and 7:30 p.m. on weekdays and between 7:30 a.m. and 7:30 p.m. on weekends.

In 1980, Quebec banned junk-food marketing in print and digital media to kids under 13 years old. By one estimate, the ban led to a 13% reduction in fast food spending per week.

“Banning junk food at certain times of day means advertisers will not be able to work around the plans,” BBC News health editor James Gallagher wrote in his analysis of the restrictions in Mexico, noting that similar bans in other countries had not prevented companies from airing ads during other types of programming children might be watching.

What kind of regulation exists in America?

Jennifer Harris, director of marketing initiatives at the Rudd Center for Food Policy and Obesity, takes issue with these pledges, referring to them as mostly public gestures versus deep resolutions to help kids. Plus, the commitments haven’t actually shown much positive impact, she added.

“There’s a lot of loopholes,” Harris said. “The products that [the participants] are advertising mostly are sugary cereals, [other] things like Lunchables, fruit snacks, Popsicles — a lot of things people wouldn’t consider healthier dietary choices.”

What’s more, the CFBAI only covers the specific products brands choose to advertise on TV; the initiative doesn’t regulate what the brands actually end up selling — and what sells often doesn’t satisfy the nutritional guidelines. When McDonald’s advertises apple slices and milk as part of its Happy Meal, kids don’t buy the healthier option, Harris explained.

“This is nothing more than an attempt to health-wash McDonald’s image and distract us from the fact that its core business model is burger, fries and sodas,” Billings said.

The U.S.’s working policies are starkly different from those in other countries because, for the most part, the government stays out of it.

“When it’s self-regulation and pledges, there’s no enforcement,” Josh Golin, executive director of the nonprofit advocacy group Campaign for a Commercial-Free Childhood, said in an interview. He cited Mars and Coca-Cola — two participants of CFBAI — as examples of company commitments that aren’t quite what they appear to be.

Mars, the purveyor of M&Ms, Skittles and Orbit gum, created its own marketing code, which includes principles like not marketing directly to children under the age of 12, “because, based on scientific evidence, we believe they cannot identify and understand the persuasive intent of advertising.”

“We still have one of the most restrictive marketing codes in the food industry; ultimately we thought it was the right thing to do,” Jacqui Stephenson, Mars’ global responsible marketing director, said in a phone interview. “We believed it was wrong to target children with our brand, because they didn’t have the ability to scrutinize or have a critical understanding of the advertising.”

While Mars’ commitment is an upgrade from the loose pledges presented in CFBAI, Golin says to take it with a grain of salt — it’s not uncommon to see a pack of M&Ms branded with a character from Shrek.

“Those aren’t for adults,” he said.

What would a world without food advertising to kids look like?

Without advertising, kids might not annoy their parents as much as they presently do.

When children are bombarded with bright, seductive media that suggests they’ll be cooler, better or more fun with a certain product in their possession, they’re increasingly armed with “pester power.” This is the relentless, interminable nagging that you might observe in the most colorful section of the cereal aisle, where a child may plead or scream until their parent submits to placing a sugary item in the shopping cart.

Beyond making parents’ lives a little saner, the overall effect of food-free advertising is tough to quantify.

“We live in such a marketing-driven society, and the speed at which that happens is bad for kids. We need kids to have time and space to try food and hear from people who care about them,” Golin said.

Can we fix the tenuous relationship between children and food?

Ultimately, the answer is probably not to market broccoli or to have a Disney star shill nutritious options to kids. Instead, we should allow kids to develop a healthy relationship to food without influence and interference of multi-billion-dollar companies.

When we commend NBA idol Steph Curry for repping Smartwater, but sigh at Lebron James hyping Coke, the message of what healthy eating means gets muddied.

“If we teach kids that the way to select foods is based on what celebrities tell us, or it’s a game or we want a toy, we’re teaching kids to eat for external reasons. [They’re] not developing that healthy internal relationship where they like a food or want to be healthy,” Golin said. He added that it’d be ideal for kids to want to go out to eat with their family, because “sitting down and having a meal in a restaurant is a pleasurable and important family experience” — not because there’s a toy included.

“While I do think parents can and should talk to their kids, I think putting the onus on parents is entirely unfair, and this is an area thats ripe for regulation,” Bettina Elias Siegel, author behind The Lunch Tray, a site dedicated to covering food policy as it relates to children, said in a phone interview. “We’re all confused about the healthfulness of food, and the [food] industry does everything it can to keep us confused.”

One way Siegel said parents can make an impact is to educate kids about the very tactics brands are using to get their dollars and loyalty. “Try to inoculate kids against the techniques being used against them,” she advised, citing a 2016 study that found when kids learn about the manipulative practices of brands, their loyalty to the brands stray. “They really don’t like to feel like anyone is getting the better of them,” Siegel said.

As it turns out, kids might just be savvier than anyone — parents, fast-food CEOs, marketers and celebrities — give them credit for.