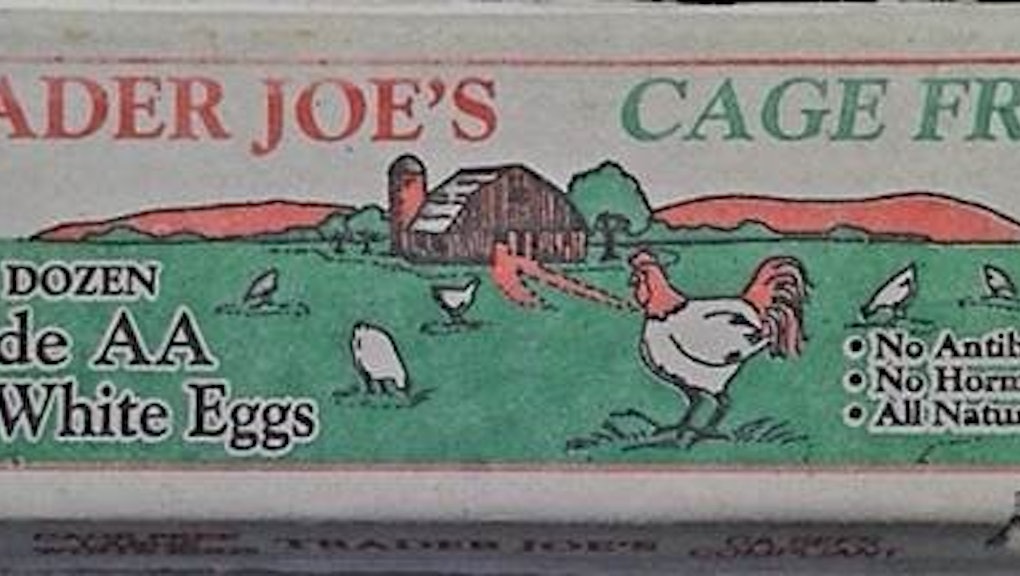 Trader Joe’s is being sued by the Animal Legal Defense Fund, which alleges that the grocery company’s egg cartons are misleading to customers.

On March 15, the ALDF filed a consumer protection lawsuit seeking to “stop Trader Joe’s from deceptively labeling its cage-free eggs and misleading consumers seeking eggs from hens raised in more natural conditions,” according to an ALDF press release. As of press time, Trader Joe’s had yet to respond to the lawsuit.

What makes Trader Joe’s packaging so misleading? The ALDF argues that the illustration on the carton — which shows hens in a spacious green pasture — is deceptive because it’s not reflective of the actual lives led by the animals that produce the eggs. In reality, Trader Joe’s hens are kept inside industrial hen houses and don’t have access to green pastures like the ones printed on the carton, Tyler Lobdell, food law fellow for the ALDF said in an interview. These hens live in packed warehouses with thousands of other birds, and they are never exposed to the outdoors. The illustration, paired with the phrase “cage-free” in bold, paints a picture for the consumer that’s largely different from reality.

The ambiguity of “cage-free”

The meaning of cage-free is implied in its name. Hens that are raised outside of cages are able to practice their natural behaviors that caged hens cannot, which include walking, spreading their wings and laying their eggs in nests, according to the Humane Society. While hens raised outside of cages inarguably live more humane lives than those confined to battery cages — which, on average, allots the animal 67 square inches of cage space (smaller than the size of a sheet of letter-sized paper) — cage-free isn’t necessarily synonymous with humane, or delightful countryside illustrations.

There are a lot of examples of producers “humane-washing” their product without taking the necessary steps to make that a reality.

In a sense, all eggs labeled “cage-free” are misleading. The terminology doesn’t ensure that birds are treated as compassionately as conscious consumers would like, nor does it have set requirements by the government, meaning a cage-free raised hen on one farm could live very differently than a hen raised elsewhere. Cage-free doesn’t mean the animals even have to see the light of day.

Long story short: Egg carton labels are terribly confusing. The chart below from the Humane Society can help consumers better distinguish what they’re buying when shopping for eggs.

But this chart doesn’t go into some essential detail. The ALDF’s Lobdell explained that since these labels don’t have strongly enforced practices behind them, treatment standards are often not being met. “There are a lot of examples of producers ‘humane-washing’ their product without taking the necessary steps to make that a reality,” Lobdell said. While “free-range” typically means hens have access to the outdoors, Lobdell said the mere concept of “outdoors” can get “really murky.”

If you’re feeling a little bewildered, you’re hardly alone. Lobdell said there’s plenty of evidence of consumer confusion around animal welfare and the egg industry in particular, a lot of which centers around the belief that “cage-free” means a lot more than it does. “The fact that Trader Joe’s pairs “cage-free” text with this imagery seems like an obvious attempt to take advantage of this confusion,” he explained.

Trader Joe’s isn’t the first to allegedly mislead its consumers this way. In January, a federal lawsuit alleged that Walmart misled shoppers with egg cartons that said the egg-producing hens had outdoor access, when, in actuality, the hens were raised “inside enclosed structures that have screens to let air in,” Reuters reported. The mislabeling was viewed as extra egregious because the product cost consumers more than the those that didn’t promise outdoor space. The Walmart lawsuit is ongoing.

Cage-free is a step closer to the better treatment of hens, but it’s just the beginning in the realm of animal welfare. Companies like McDonald’s and Sysco Corporation, the world’s largest food distributer, have made commitments to using only cage-free eggs. Trader Joe’s, too, has vowed to have all of its eggs sold nationally come from cage-free suppliers by 2025.

“Consumers are more and more concerned about animal welfare every year, and they’re willing to vote with their dollar,” said Lobdell. “When the reality of cage-free is [better understood], it’s going to lose its luster and people are going to demand more.”