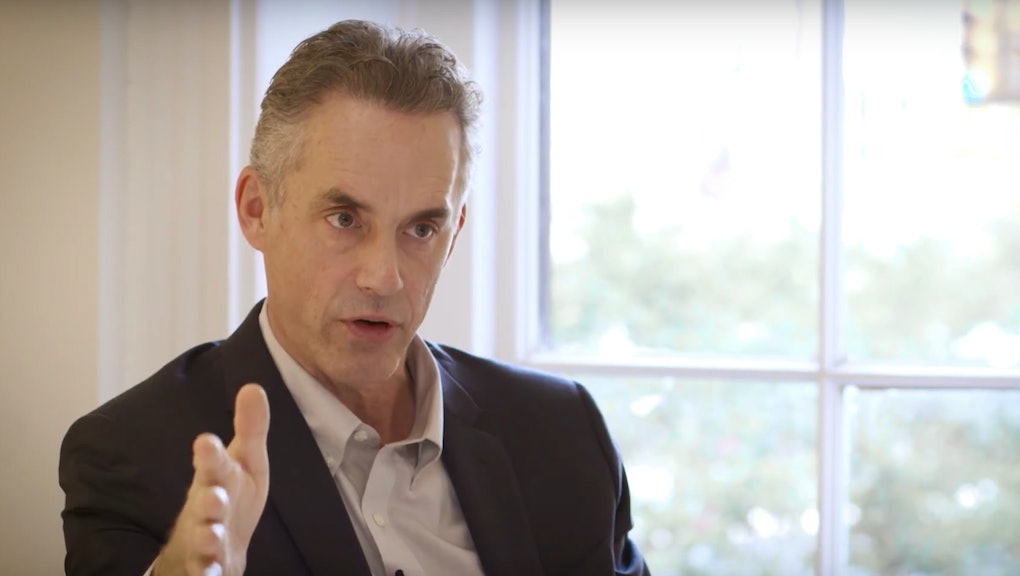 On YouTube, conservatives are thriving, with innumerable videos of right wing pundits like Ben Shapiro and Charlie Kirk “destroying social justice warriors” rack up millions of views. Meanwhile, right wing educational channels like PragerU dole out bite-sized lectures on why socialism isn’t as cool as the kids think. But perhaps none of YouTube’s reactionary thinkers and preachers are more effective and popular than Jordan Peterson.

For young conservatives, the Canadian professor and clinical psychologist has become a “father figure,” which is the term adorning the book jacket for his new self-help book 12 Rules For Life. The book, which mixes practical advice like “clean your room” with angry screeds about feminism, has spent weeks toward the top of Amazon’s best selling lists. The New York Times’ in-house conservative columnist David Brooks declared in January that we are in the “Jordan Peterson moment,” and speculated that the is “the most influential public intellectual in the Western world right now.”

Since a notorious January interview with British broadcaster Cathy Newman, where he went toe-to-toe on the pay gap between men and women, there seems to be a new Peterson YouTube video or lecture every week putting him back in the public eye, and eliciting both mockery or increased devotion. There was the February interview with Vice where he said that women who wear makeup in the workplace are hypocrites for complaining about sexual harassment. And there was Monday’s Twitter meltdown, where he threatened to slap a writer who accused him of being a fascist. Then there’s his complaints that he can’t physically attack women in conversations the way he’s (apparently) socially permitted to with men. And let’s not forget his older videos where he discusses that certain Disney movies are neo-Marxist propaganda.

Now Peterson is working on, and accepting donations for, an online university. This was a plan he teased out over the past year; now he’s begun development on its first “module,” according to recent interviews. The institution would revolve mostly around the humanities and the great books of Western civilization. It would also be, as he’s said in his lectures and interviews, “autonomous and self-improving, a minimum of administrative overhead, extremely low cost, widespread availability, crowd-sourced in its structure and autonomously self-improving.”

Peterson believes that his project could save millions from the “degeneracy” of modern universities, which are corrupted, as he says, by women’s studies and discussions of diversity.

What’s responsible for the degeneracy, according to Peterson? “Postmodern neo-Marxism.” This somewhat heady term essentially describes a subversive cabal of Marxist thinkers who, starting in the 1970s began conspiring to destroy the natural hierarchies in Western culture. Peterson believes that these thoughts have lived on in discussions of white privilege and diversity, mostly perpetuated in the liberal arts and college humanities departments, which he says have become “indoctrination cults.”

This is really a rebranding of a separate, anti-Semitic conspiracy theory called “cultural Marxism,” which has been used since the 1980s by the far-right to explain the alleged secret motivation behind everything from black superhero movies to the #MeToo movement.

Humanities departments at universities across the world, Peterson regularly preaches, have become totally corrupted by the tendrils of neo-Marxist doctrine, and therefore cannot survive — and must not, for the sake of Western civilization. Peterson advises his audience to abandon universities in favor of trade schools, and has made videos aimed at young children advising them to stage walkouts of middle school classes that mention topics like “diversity.”

“Women’s studies, and all the ethnic studies and racial studies groups ... those things have to go, and the faster they go the better,” Peterson said during a July speech. “It would have been better had they never been part of the university to begin with, as far as I can tell. Sociology, that’s corrupt. Anthropology, that’s corrupt. English literature, that’s corrupt.”

Peterson’ first plan in reforming the university was to develop an artificially intelligent program that would comb through course materials available at universities to develop a blacklist of courses, which have been corrupted by so-called “neo-Marxist” ideology.

“I’m hoping that over about a five-year period, that a concerted effort could be made to knock enrollment down in post-modern, neo-Marxist cult classes by 75% across the West,” Peterson said on a Canadian morning show in July. “So our plan, initially, is to cut off the supply to the people who are running the so-called “indoctrination cults.”

After Peterson began working with a programmer to develop this website, his colleagues at the University of Toronto wrote a collective letter to the university warning them that Peterson planned on surveilling and defunding his fellow faculty. The site, it appears, never went public. However, Peterson apparently still thinks artificial intelligence could be essential to his educational revolution, helping him create a crowd-sourced university that would possibly be 50 times cheaper than a traditional college education.

How will Peterson create a crowd-sourced university? Based on one of his lectures, a thousand students might come up with 10 multiple choice questions. Then, a statistical model would figure out which questions are the best, and other students could vote on them. Through the apparently unpaid work of thousands of students, the process of making tests becomes self-generating and self-improving.

At this point, two partners have been named by Paterson on the project so far. Software engineer Daniel Higgins and McGill University professor Robert Pihl were both part of Peterson’s “self authoring” program, an online self-help system that he helped develop as part of his clinical psychology practice.

The team’s first task is building the university in “modules,” piece by piece, testing to see if there’s a market demand. The first will be a writing module, where students will evaluate, annotate and comment on other students’ writing. Writing competitions would be graded by other students through crowd-sourcing. In one interview, Peterson said that “accreditation points” would be dependent on peer evaluation.

It’s unclear how Peterson — a staunch individualist who has broken down in tears lamenting the suffering that unaccountable groupthink can inflict on individuals — can support a system reliant on the mercy of crowd-sourced peer evaluation.

The online university was advertised as ready to begin serious development when Peterson hit his 8,500 paid supporter milestone on crowdsourced funding platform Patreon. When that happened last week, Peterson moved the milestone for starting the online university up to 10,000 subscribers. He’s already close to 9,000 patrons, so 10,000 can’t be far off.

Peterson writes on his Patreon that the project will take years to complete. Until then, his devotees will have to make do at traditional universities, with formal accreditation and living professors.