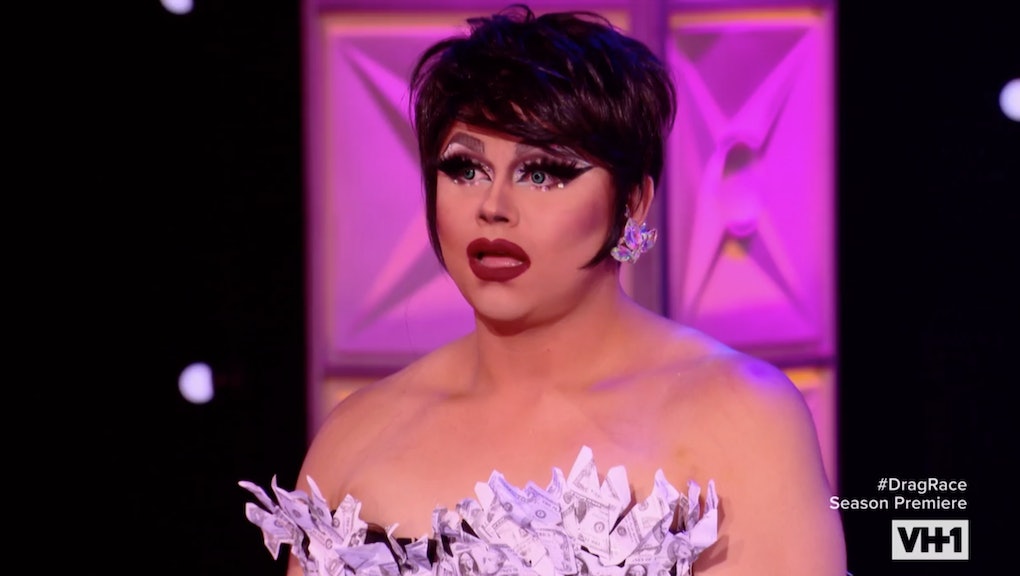 ‘RuPaul’s Drag Race’ season 10, episode one: After ‘All Stars 3,’ this was a breath of fresh air

Hello, my crafty little coconuts. Welcome to Fundamental Reading, the weekly column where we chat about RuPaul’s Drag Race.

With no downtime between All Stars 3 and season 10, I was honestly dreading having to sit through another dozen or so episodes of Drag Race, but after this season’s premiere, I have done a complete about-face.

As many have noted, last-minute twists (especially the final jury to decide a top two) in All Stars 3 felt like a cheap, exhausting way to spark drama — but with this brand-new cast of queens, it’s back to business as usual. Once again, we have a handful of aspirational divas at various stages in their careers, crammed together in a messy microcosm of ego and glitter, each vying for the title of America’s Next Drag Superstar, with only their individual talents to get them through to the end.

Really, the signal that season 10’s premiere was the pivot we so desperately needed occurred within the first 15 minutes or so, as each queen entered the workroom for the first time. (Check out our ranking of each entrance look.) After each new queen came in to join those who were already there, they playfully jabbed at each other in a way that struck a balance between the sheer nastiness of All Stars 3 and the saccharine sweetness of season nine.

My favorite exchange happened after Vanessa Vanjie Mateo — the self-described “banjee” queen and drag daughter of season three’s Alexis Mateo — entered. Mateo said she has competed in a bunch of pageants, when someone offscreen — maybe The Vixen? — asked if she’s actually won anything. This, of course, elicited delighted screams from the room. And that’s when Kalorie Karbdashian Williams, the curvy, bright-eyed underdog from Albuquerque, New Mexico, piped up.

“Does that mean I’m a pageant queen, then?” Kalorie said.

“Have you won one?” Asia O’Hara asked.

“I’ve won all of them I’ve competed in,” Kalorie responded.

“But didn’t you also say there’s, like, no drag there [in Albuquerque]?” Blair St. Clair, the runaway Keebler elf with stars in her eyes, said.

It was the perfect kind of back-and-forth that makes Drag Race great: The comments were shady and biting, but never crossed over into feeling truly mean-spirited.

After a star-studded mini challenge in which each queen had to strut their stuff on a runway in front of Drag Race royalty — like Adore Delano, Trixie Mattel, Morgan McMichaels, Peppermint, Katya and Manila Luzon — it was onto the main challenge of the week: “Drag on a Dime,” a redo of the very first Drag Race challenge ever. Here, the queens fished through a collection of dollar store items, like pool noodles, sponges and aluminum foil, and had to turn them into a couture drag look worthy of the runway.

These more creativity-based challenges, in which queens have to design their own looks, are often the ones that most effectively separate the wheat from the chaff. Immediately, we get a look at a queen’s eye for aesthetics, their sense of their own identities as performers, their work ethic and their technical know-how. It’s like the perfect fusion of America’s Next Top Model and Project Runway.

Here’s a rundown of how each queen did.

I’m pretty gagged Aquaria didn’t end up in the top for this one, honestly. Her silhouette was perhaps the most dramatic of the bunch, casting aside the traditional gown silhouette for something much more fantastical. She also got off a few great zingers in her face-to-cam, my favorite of which was, “Call me mother — goose.”

Asia opted for a manic, neon cocktail dress with a truly ridiculous, amazing headpiece: a shopping basket balanced perfectly atop her skull. This one was perhaps the most psychedelic of the bunch, but it looked heavy on her body and wasn’t particularly flattering.

Kalorie came out in a strapless, floor-length gown coated in dollar bills. The judges read her for redoing an inferior version of a look that’s been done by several queens before — Raja, Manila and Acid Betty — and she ended up in the bottom two.

Blair sported a chic, flirty, metallic dress made from windshield sun visors. The judges loved this look for its fit and combination of textures.

Judge Michelle Visage was not a fan of miss Bottoms this week. She called her cone hat “witchy” and didn’t understand her signature, spotty makeup style that she rocks all the time in New York City. I personally liked that Dusty accentuated her height in a playful way with the cone-shaped hat and created something other than a gown — but hey, you can’t please everyone.

Kameron — the season’s most masculine, muscly queen — came out in a short, floral dress. Taken with her first workroom look, it’s clear that Kameron likes playing with the contrast of masculine and feminine, but this dress looked a little heavy and matronly to me.

This look, for me, was one of the strongest of the week. It was bold, conceptual and fun — but it required Monét’s description to sell it. If she didn’t tell us the ping pong balls were supposed to be bubbles and her earrings were supposed to signify water, I wouldn’t have guessed it. But having the dress drag along the floor beneath her feet, cleaning it with the sponge attachments as she went, was brilliant.

The Vixen was deemed “safe” for this look, and I’m still not entirely sure why. It was a bathing suit with some cut up pool noodles glued to it. I still don’t get it.

Mayhem won this week’s challenge, and it’s not hard to see why. She didn’t opt for a lot of color — choosing instead to go with a purely black dress — but her outfit was immaculately made. The amount of texture she created with trash bags and rubber gloves was truly gorgeous.

Monique’s Queen of Hearts-inspired look was one of the more ambitious outfits of the night, but it failed a bit in execution. The bodice, in particular, was a bit too boxy and loose to land her in the top.

Poor Vanessa. This Barbie and flower-encrusted look was fun on paper, but failed miserably in execution. All of that volume around her center made her look squat, round and childlike, landing her in the bottom two.

Yuhua created a well-tailored, flattering gown out of caution tape, but we’ve seen this a million times before. The head piece was interestingly shaped, but didn’t have any conceptual significance.

Miz Cracker’s dress was stunning. It wasn’t overly complicated, but it fit well and had an interesting shape. In particular, the over-exaggerated collar made from the brims of straw hats that exposed her bare chest was wonderful. It created a fusion of modern style sensibilities with an old-school shape. And her makeup, whether or not she stole it from Aquaria, tied the whole thing up perfectly.

After the main episode of Drag Race, VH1 aired Untucked, a typically online-only segment in which the queens gossip with one another backstage while the judges make their final decisions. Here, we got to see Aquaria expand on her feelings that Miz Cracker has a habit of aping her style, including this week’s sad clown-style eye makeup, planting seeds for drama to sprout later on in the season. We still have yet to hear Cracker’s side of the story, so I suspect — OK, desperately hope — that’ll come to a head soon.

In the end, Ru pitted Kalorie and Vanessa against each other in a lip sync for their lives to guest judge Christina Aguilera’s “Ain’t No Other Man.” Kalorie, though she received arguably harsher critique on the runway, slayed the lip sync and won, sending Vanessa home.

Mic will have exit interviews every week with the eliminated queen. Stay tuned for our upcoming chat with Vanessa.