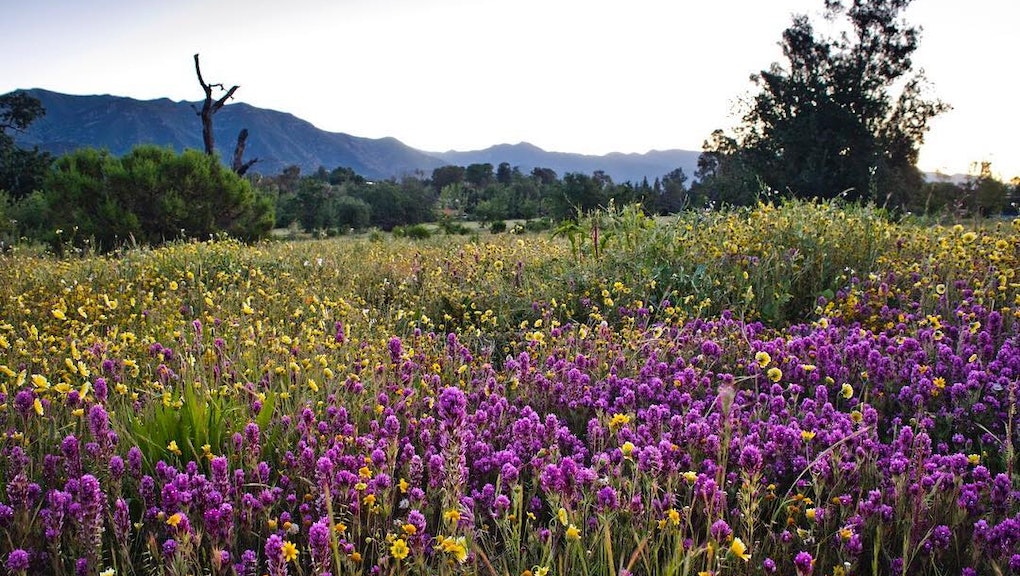 After the California wildfires, a stunning floral phenomenon will bloom this spring

Ojai, California — less than two hours from Los Angeles, with a population of 7,500 — is known as a spiritual refuge. It’s a place where corporate burnouts reset and creatives let loose. In this 4.3-square-mile town, no billboards or chain stores are allowed; the main street has a few wine bars, upscale furniture showrooms, a kombucha bar — and that’s about it.

The real allure of this fairytale town has more to do with its environment. Vast citrus groves fan out in yellow-and-orange polka dotted rows along the edge of town. Six thousand feet in the air, the Topa Topa mountains catch the sun’s dying light at a unique angle that locals have dubbed “the pink moment.” Tourism has been picking up in recent years, though whether that’s due to the annual wildflower bloom or Ojai’s off-the-grid sanctuary vibe, it’s hard to say. One thing’s for sure: Nature has become a big part of the draw.

“When people say there are no seasons in California, they don’t understand plants. There are so many things blooming here,” Julie Tumamait-Stenslie, an Ojai native, said in a phone interview. The 61-year-old — an elder in the southern California-based Chumash tribe — points to the unique diversity of native plants as one of the things that sustained her ancestors over thousands of years.

Poppies, the flame-hued state flower, will soon start covering the hillsides in Ventura River Preserve. “In Chumash culture, when someone died,” she said, “a raven would pluck your eyeballs out. He would then stick poppies in your eye sockets, and they would light up so you could find your way through the land of the dead.”

Stories like this were preserved by the Chumash, whose original territory once extended 7,000 square miles, from Malibu all the way up to Monterey County, to deepen their understanding of their unique surroundings. Located in an east-west valley that’s set back from the ocean but shielded by the mountains, Ojai is unusually fertile, even by California standards. Its cooler, Mediterranean-style climate mixed with the desert’s strong summer heat creates a sweet spot. It’s why olives, apricots, oranges, almonds and the local favorite, pixie tangerines, have thrived here. And it’s what makes the annual wildflower bloom so remarkable.

Walking through Ojai Valley in April is a little like being inside one of Hogwarts’ greenhouses — each plant has a unique power. Hiking the Upper River Loop, you’ll smell white and purple sage mixed with the fruity scent of elderberry, a pom-pom-shaped yellow blossom that’s been tied to fighting the common cold. Then there’s yerba santa, so-named by the Spaniards who (after being taught by Chumash) realized it was a more powerful antidote to pneumonia and bronchitis than any medicine that was available in Europe; meanwhile, ceanothus, or “mountain lilac,” is great to have around if you brush up against poison ivy.

“The plants talk to us, but not in a woo-woo way,” Lanny Kaufer, the town’s unofficial plant expert, explained on a recent botany tour through the river bottom. “They walk to us in smells and tastes and touch — that’s their language.”

“The plants talk to us, but not in a woo-woo way”.

The devastating wildfires in December shuttered businesses and forced many to evacuate. They also left behind a surprising side effect: Travelers to Ojai this month will bear witness to a unique floral phenomenon: “fire followers,” a particular kind of seed that’s activated by flames. Unlike most plants, which take years to grow back after a major blaze, these seeds actually thrive.

Fire follower seeds can only germinate when stimulated by intense heat — as provided, in this case, by the awful Thomas fires — and four months on, these little soldiers are getting ready to pop. The result, according to Kaufer, is going to be a showstopper. “[Flowers like] cacomite and mariposa lily have co-evolved with fire for millions of years. They’re impossible to start from seed — you literally have to set it on fire, or put it in proximity to smoke, to activate the seed.” Many hardcore plant lovers make a point of coming out for the post-fire bloom.

Cacomite, otherwise known as “blue dicks” or its Latin name brodiaea, is one of Ojai’s top fire followers, a long-stemmed beauty with star-shaped pointed purple petals. Both the bulb and the flower are edible, and cacomite once featured prominently in the traditional Chumash spring diet, especially after months of subsisting on bland winter acorns. In the context of the wildfires, this year, the cacomite will be a colorful addition to the valley’s floral explosion, and a poignant reminder that life goes on.