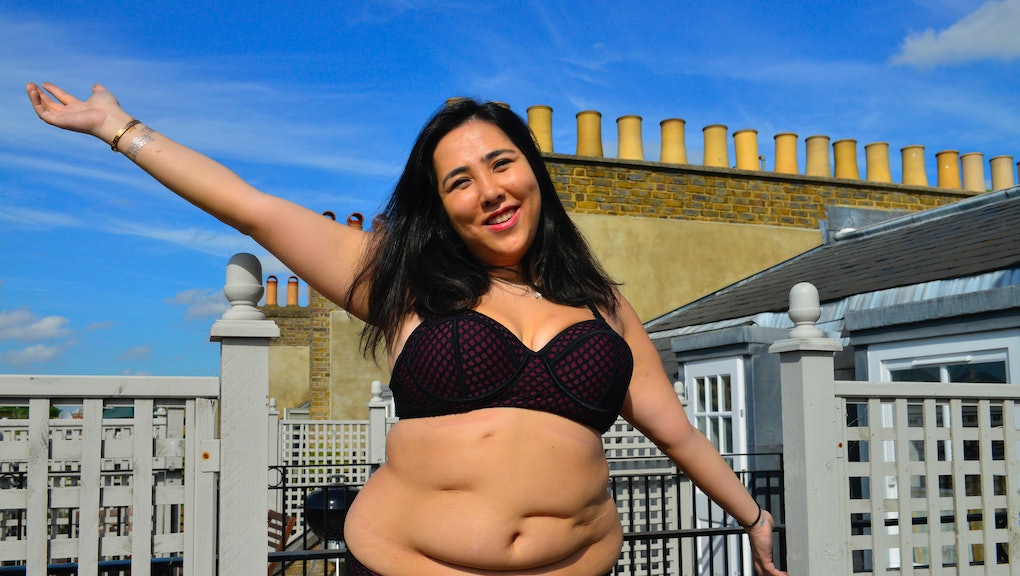 Michelle Elman, the woman behind the body-positive @ScarredNotScared Instagram account that boasts more than 80,000 followers and counting, isn’t just passionate about spreading body positivity on the internet — it’s literally her job. Elman is a London-based life coach specializing in body confidence, so she’s in a unique position of not only knowing what people need to hear from an expert’s point of view, but also how to start conversations.

One conversation she’s started, since launching her Instagram in 2014, is about scars. “There’s power in images,” Elman said in a recent interview. “When you start seeing photos of scarred bodies with captions alongside them, you start to see the human behind the scar.”

On Elman’s Instagram, amidst the standard inspirational quotes and images of women who probably don’t see themselves in fashion magazines, are pictures of women with scars — Elman included.

Elman, 24, has visible scars on her abdomen, and scars that are result of a brain tumor, punctured intestines, an obstructed bowel, a cyst in her brain and a condition called hydrocephalus. Her surgeries started before the age of one, and the last one was earlier this year.

“Ironically, I believe sharing more photos of scarred bodies means we take the focus off the scar because the scar becomes normalized, and we can talk about the important stories behind each scar,” Elman said.

The reason she’s been able to be so open about her own story is because, frankly, she’s gone through this journey to self-acceptance already.

“I think I was in the unique position where I had body confidence before I started my Instagram account,” Elman said. “I personally could not have run my account or made myself as vulnerable as I do on my page if I wasn’t secure and confident in my appearance. Having that inner confidence means that I am rarely affected by negative comments because my confidence existed before I started posting about body positivity.”

Because of that, Elman’s persona on her account is like an encouraging teacher. She shares her own stories and anecdotes, which has caused her to go viral a number of times. In 2015, it was a viral post about bikinis and in 2017, a post about the myth of the insecure fat friend. In July, Elman will publish her first book.

“The most beautiful thing is going into my comments and seeing my followers commenting under each other’s comments,” Elman said. “The other day I spoke about how we have all become numb to the words ‘How are you?’ and we are so used to responding with a quick ‘Good, and you?’ so I asked them to tell me how they really were in the comments and so many messages of love and support were left under each other’s confessions of how they felt. It’s truly special when strangers connect like that.”

What Elman’s particularly good at too is highlighting other women within this body-positive community you might not have heard about, like Raiche Mederick, who has burns on 70% of her body.

And Hannah Witton, who has ulcerative colitis and uses a ileostomy bag.

It’s through stories like Mederick’s, Witton’s and Elman’s that we can broaden the idea of who the body positive conversation encapsulates, and it can further grow and evolve with the people who need to hear a little bit of positivity a day.

“My goal is to open up the conversation and challenge everyone’s perceptions and beliefs around beauty and their own body image,” Elman said. “I want people to realize that loving your body is not only a reality and a possibility for me but is also a possibility for them. And that they don’t need to change their appearance in order to be able to love themselves.”