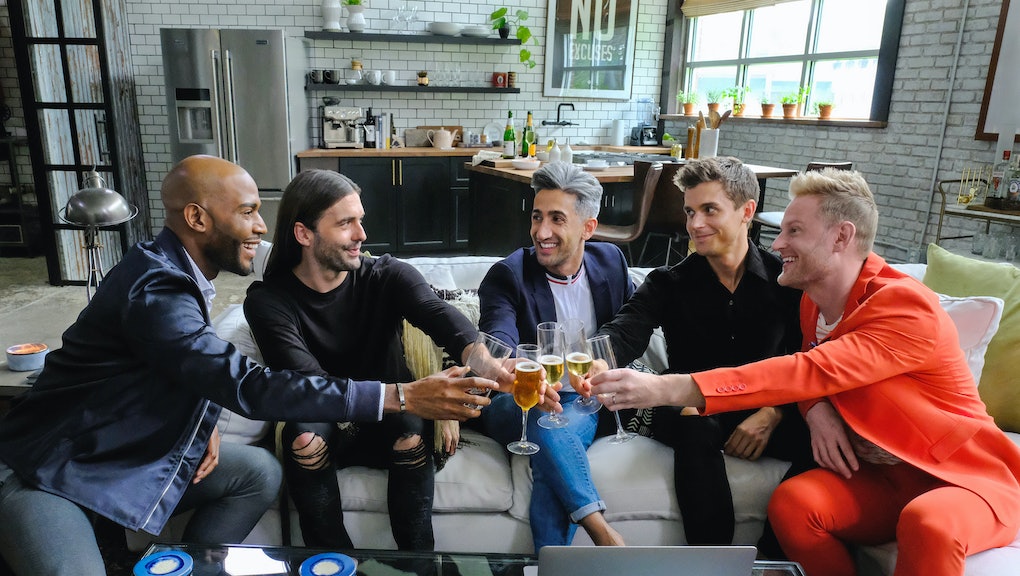 5 ways to make over the second season of ‘Queer Eye’

On Monday, Netflix announced Queer Eye — the 2018 reboot of Bravo’s Queer Eye for the Straight Guy — will be making its glorious return for a second season.

This is great news: Queer Eye is a truly wonderful series that depicts queer men interacting with each other in an affectionate, endearing way. And, despite the show’s Hallmark-y nature, the transformations these contestants go through seem genuine.

But there’s always room for improvement, so, we got to thinking: How might Netflix make over its own makeover show for season two? What has it learned about what worked and what didn’t?

In case Netflix is having trouble coming up with ideas, we came up with a few of our own.

It’s been clear from the jump that Netflix isn’t interested in simply making more of the original Queer Eye for the Straight Guy that Bravo debuted in 2003. In the initial trailer for the show, the show’s fashion expert Tan France noted, “The original show was fighting for tolerance — our fight is for acceptance.” Season two of the reboot should continue to distance itself from the original even more. The easiest way to do so is to include nonmale contestants. (I still refuse to call them “heroes,” the eyeroll-worthy term the show insists on.)

Netflix’s show is simply titled Queer Eye, so there’s no inherent reason the contestants all have to be straight, cisgender men. Season one tested that boundary a bit in episode four, which starred A.J., a gay man struggling to come out to his family. But season two should throw all caution to the wind and include people of more genders and sexualities, like cisgender women, nonbinary and trans people.

In fact, in an interview with Mic, Tan France said he hopes season two will do exactly that.

“I do want to be able to take on other clients, not just straight men and gay men,” France said. “I would love to see a woman or a trans person or somebody who’s gender-fluid.”

There’s a counterargument to be made that the show’s central mission of spreading acceptance for queer people heavily revolves around confronting conservative, toxic masculinity — but I think that’s shortsighted. Fifty-two percent of white women voted for Donald Trump in the 2016 presidential election; clearly, queer acceptance is not a lesson only men need to learn.

2. Give Bobby more time to show the design process

Once Netflix released the first season of Queer Eye, a number of major talking points emerged among the show’s fans. One, of course, revolved around the question of Antoni Porowski’s cooking skills, but another had to do with Bobby Berk, Queer Eye’s interior designer. Specifically, that he’s the hardest working man on the show. Unfortunately, he’s also the man who got the least amount of screen time — you know, because he was busy working his ass off remodeling entire homes over the span of a week.

Season two should give him a little more time in front of the camera, just so the audience can appreciate exactly how much work goes into redesigning a space. In an interview with Architectural Digest, Berk said one of the homes they remodeled was infested with termites. Why didn’t we get to see any of that drama unfold?

I get that the show is focused almost entirely on the emotional journey of the contestants, but I think viewers would appreciate understanding more of the nuts and bolts of how these dramatic redesigns come together.

Maybe the dramatics of RuPaul’s Drag Race have numbed my sensitivity to conflict, but I think the first season of Queer Eye was a little too nice.

I get that, at the end of the day, Queer Eye wants to be a feel-good show about how we’re not so different after all, but that’s simply incompatible with its goal of spreading acceptance of the queer community. You can’t throw five flamboyant gay men into the American South, give a makeover to a Trump-voting police officer and expect the entire episode to feel good. There is inherent conflict there, and I would’ve liked to see that unpacked a little more.

The most conflict-ridden interactions happen in episode three, starring Cory, the aforementioned police officer, but it’s all still sanitized. At the beginning of the episode, Karamo Brown — the culture expert and Queer Eye’s only black cast member — is driving the gang to Cory’s house, when they get pulled over.

The tension is palpable. Karamo makes a joke about being pulled over for being black, and Jonathan Van Ness — the show’s grooming expert — starts filming the police officer in case things go south.

Eventually, it’s revealed to be a part of a prank: The person pulling them over is Henry, Cory’s close friend and coworker who nominated him to be on the show in the first place. But we, as viewers, don’t ever really get to see Karamo processing this clearly traumatic moment, despite him saying how much it affected him in a conversation he has with Cory later.

“Yesterday, when we went to your house and they started playing in your [police] car, I was totally shut off,” Karamo says to Cory.

But we never see any of that actually happening. The segment where the fab five trawls through Cory’s belongings is just like any other — save for a moment where Karamo dons Cory’s “Make America Great Again” hat, quipping that no other black person has worn a MAGA hat before, “except for Ben Carson... and Omarosa.”

Having Karamo simply recount how hurt he was after the fact robs the conversation of some of its impact, and the messaging eventually boils down to “black people and police officers both misunderstand each other equally.”

Season two can do better.

4. Make the episodes a tad longer

Queer Eye tries to do a heck of a lot with not much time, and it’s likely the root of a few major problems with the series I’ve mentioned thus far. Part of the reason Bobby doesn’t get much screen time is simply because there isn’t a whole lot of time for him to be on screen.

With five different experts on the show, all of whom have to do their thing each episode, we rarely get the time to really see each one shine. (Maybe that would help audiences ease up on poking fun at Antoni Porowski’s sometimes oversimplified cooking segments, too.)

Every episode of season one hovers around the 45-minute mark, but maybe bumping things up to an hour would help each scene breathe a bit more, bringing it into the realm of a docuseries rather than the occasionally over-edited reality show it is now.

5. Update us on the contestants from season one

Yes, the main appeal of Queer Eye are the queer guys themselves — but it’s clear that fans are invested in the lives of contestants, too. A tweet posted by Tom, the bearded car enthusiast from the series’ first episode, has been retweeted over 11,000 times. In it, he updated viewers on the status of his relationship with Abby, his ex-wife who he was hoping to woo — again — throughout the course of the episode.

Season two should lean into the newfound fame of these contestants and offer guests a peek into how their lives have evolved since filming wrapped. Are Tom and Abby living happily ever after? How’s A.J.’s life now that he sold his beautiful apartment — which he put on the market one day after filming, mind you — and moved in with Dre? Did Joe’s standup career ever gain traction?

A simple two-minute segment at the end of each episode would be more than enough. The people need to know.