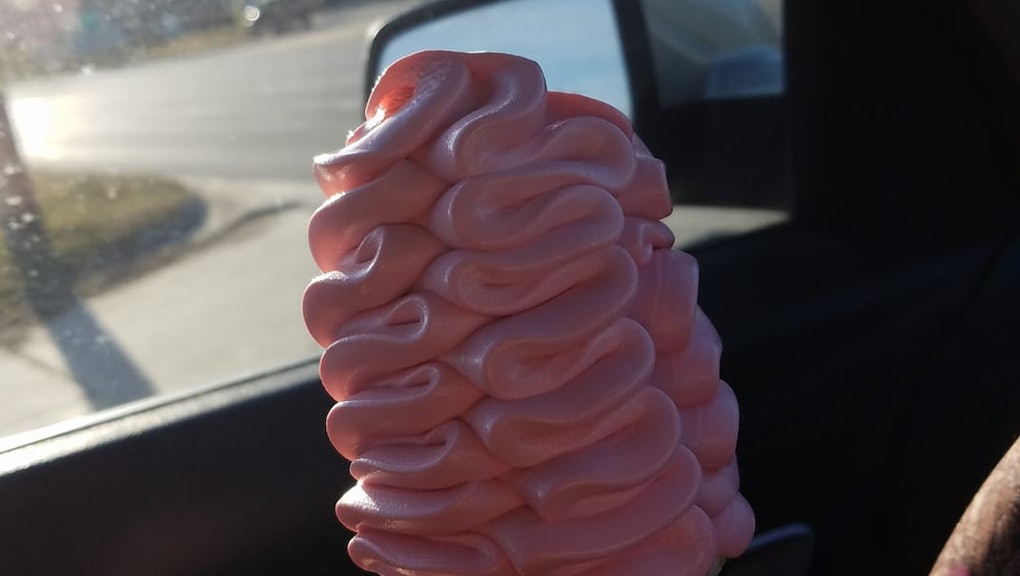 A heated debate around the name of an ice cream flavor has sparked serious controversy in Jonesville, Michigan. Years from now, perhaps this incident will be used to explore what America’s social climate looked like in 2018.

It all started when the Udder Side, an ice cream parlor, listed “Red Indian” as a flavor of the week on its Facebook page. (The Facebook post has since been deleted, but the flavor name remains on the restaurant’s website, as shown in the image below.)

In a post that has since been deleted, local resident Natasha Crall inquired on the business’ Facebook page about the racial insensitivity of the Red Indian flavor. She also took to the Hillsdale’s Hot Debates Facebook group — Jonesville is part of Hillsdale County — to suggest the name had racist undertones and needed an update. While her first post was deleted by the group admin, the second, posted on March 18, reads as follows:

“Look ... Our local culture is so far behind the times that apparently a racially insensitive ice cream flavor is A-OK. Considering that our local history includes violently forcing the [Potawatomi] from their homeland, I find this to be in extreme distaste. I also happen to have documented Cherokee blood just a couple generations back, and this makes it boil.”

Crall was referencing the fact that Hillsdale County was previously inhabited by the Potawatomi tribe prior to settlers taking over in 1827, the Hillsdale Collegian reported.

“One of the big excuses is that the ice cream flavor has been called this for 50 years — so there’s no reason to change it,” Crall said in a phone interview. “Things just really don’t add up.”

When asked whether the business would consider changing the flavor’s name, Udder Side owner Julie Bauer said, “Not at all.” Bauer, who owns the shop with her husband Dave Bauer, said in a phone interview that since Crall’s post, customers have been ordering the Red Indian flavor “more than ever.”

“Everyone has the right to an opinion, and my opinion is that this is ridiculous,” Bauer added, noting the flavor has been sold under the same name in her establishment for 30 years.

Some members of the Facebook group sided with Crall, conceding that the name of the cinnamon-flavored soft serve is racially insensitive. But others commented on Crall’s post with opposition, declaring the woman a “social justice warrior dog whistle.” Several uploaded photos of the ice cream to prove they’d enjoyed some Red Indian themselves — perhaps as an act of resistance.

Penny Swan, a moderator for Hillsdale’s Hot Debates and longtime Hillsdale resident, said she thinks the Red Indian ice cream “has nothing to do with American Indians,” but with its core ingredients.

“I went and tried it because of [Crall’s] post,” Swan said in an interview. “It’s a cinnamon flavor — cinnamon comes from Sri Lanka, which is by the Indian Ocean — and it’s flavored with Red Hots candy and that’s where the red comes from.” More troublesome than the name, she said, is the “political correctness” that’s “gotten out of hand.”

“We have to stop being offended by every little ridiculous word. It’s part of the problem these days,” Swan added.

Both Crall and Swan said they’re of American Indian descent; Crall posted she had “documented Cherokee” in her blood, and Swan said she is “one-eighth Indian.”

“They need to realize that it’s not right for white people to inform other people of different colors and races to decide what should and shouldn’t offend them.” — Natasha Crall

In their individual conversations with Mic, Crall and Swan both said: “This is not about ice cream.” Additional private Facebook groups have been created to add to the conversation.

Despite rumors that Crall plans to picket the Udder Side, she said bringing down the business is not her goal.

“I want people to know that we’re so used to talking about race in terms of black and white that we kind of lose sight about what might be hurtful to other people,” she said. “The backlash of closet racism — they’re so focused on, ‘This is an ice cream, it shouldn’t be offensive to anybody.’ They need to open their minds just a little bit and try to realize that it’s not right for white people to inform other people of different colors and races to decide what should and shouldn’t offend them.”

For her part, Swan said Crall was wrong to publicly call out the Udder Side. “I’m offended by all sorts of stuff every day, but I don’t put it out there and blast a local business who is trying to seek out a living,” she said.

But Swan also said she could empathize with Crall, albeit in a different context. “I understand that Red Indian is a derogatory verbiage, but that’s not what this is about,” she added. “If you call someone a ‘Red Indian’ in a derogatory fashion, then yes, its a bad thing.”

As for the Udder Side, co-owner Dave Bauer told MLive the name will stay until he retires. “This is all beyond me, because it is just ice cream,” he said. “There is no malicious intent. What about Irish Cream and what about Black Cherry? ... It’s a non-issue as far as I am concerned.”