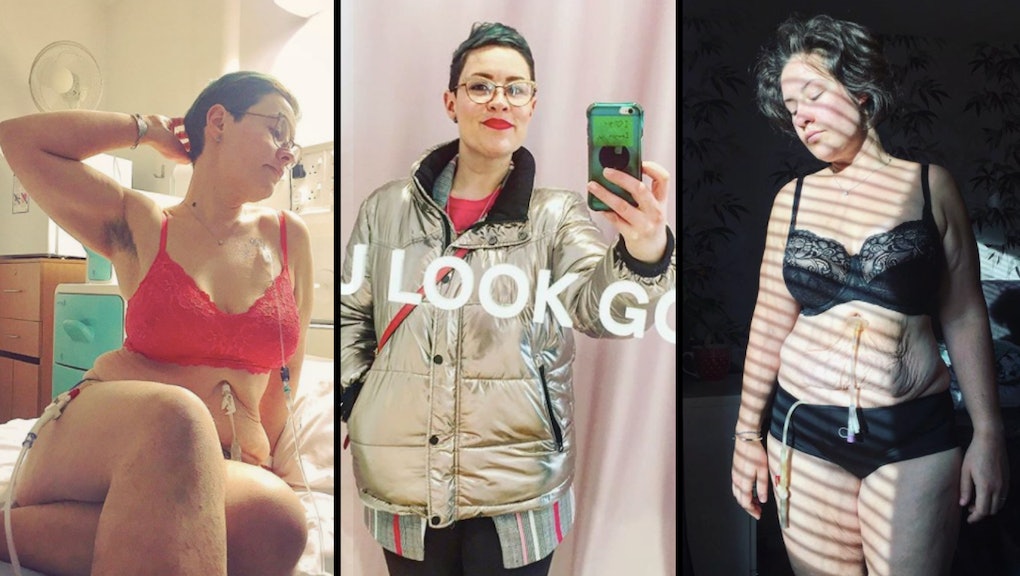 That’s due in part because she had a very different view of herself than she does now. Deeply unhappy with her physical health, what she ended up creating was an account almost entirely focused on weight loss, with followers who she felt were just following to see how she was shrinking her body.

“Little did they know I was drowning in an eating disorder with no idea how to get out,” May said in an interview.

Once she realized how she had been adding her voice to this culture of people wanting to shrink their bodies in perhaps unhealthy ways, and actively encouraging people to change their own bodies, she wanted to amend those wrongs and instead talk about the truths of living as herself, a woman who has a genetic impairment and is on a journey to self love.

Over a period of about three months, her account changed completely, shifting the focus from weight loss to, as she said, “radical body politics.”

“I think the wonderful thing about Instagram is that, with some searching, you can find bodies that represent all kinds of cultures and lives,” May said. “For me, opening that window into ‘otherness’ was the key to healing my own battles with feeling on the edges of society.”

Disability is one of those pockets within the body positivity movement that doesn’t get a ton of attention. Although some body-positive fashion campaigns have sprung up that include people with disabilities, like this one for the lingerie brand Curvy Kate, it’s still rare to see someone within the body positive community on Instagram talking explicitly and unabashedly about disability as well as self-love and appreciation, which is what body positivity is really about.

For representation’s sake, May, who lives in Bristol in the U.K., is changing that.

“I want to see all kinds bodies and hear all kinds of voices, I want the focus to be on what they want me to know about them,” May said. “I want there to be genuine representation of disabled people that shows us in the myriad of ways we present with the various different things we wish to discuss.”

Instagram just happens to be a perfect platform for this to be done, with visuals shown first and space to spread a genuine message or share a story. People with disabilities, when they post selfies or divulge their own feelings about what they’re going through, can normalize their disabilities and come to the conclusion that different bodies aren’t anything extraordinary.

“So many people live in fear of their bodies, unsure how to feel about them, never having seen anything that looks similar to them their whole lives,” May said. “Instagram offers us a platform to change that and open the eyes of people who’ve never come across impairment before.”

With lengthy captions that dig deep into May’s own feelings on disability and her body, May, who has a blog as well, has seen a rising community for people with disabilities on Instagram. This offers them a chance to share their realities and struggles all at once, as well as a place to connect, sometimes with a mere picture.

“It doesn’t matter if you’re still in your PJs with throw up in your hair, you’re able to chat with your friends and receive support with genuine understanding and without judgment,” May said. “For some disabled people, sharing the details of their impairment and the realities of their lives feels empowering, so non-disabled people get an idea of the additional difficulties we face on top of all the political stuff.”

Already in the span of nearly two years of being open about disability on Instagram, she knows she’s had an effect not only on the people who follow her, but the people orbiting around her own followers as well.

“For me, the messages that stand out come from medics who have changed their practice in order to make it more accessible to both disabled people and fat people, who both have an extremely difficult time accessing appropriate medical treatment,” May said. “Whilst they might not be as heartwarming as the messages from people having personal breakthroughs, I know that these changes will go on to impact potentially thousands of people over the practitioners’ careers. That absolutely thrills the activist in me.”

“It felt like it took forever to feel in a place I felt comfortable,” May admitted. “Slowly, though, I climbed to where I am now.”