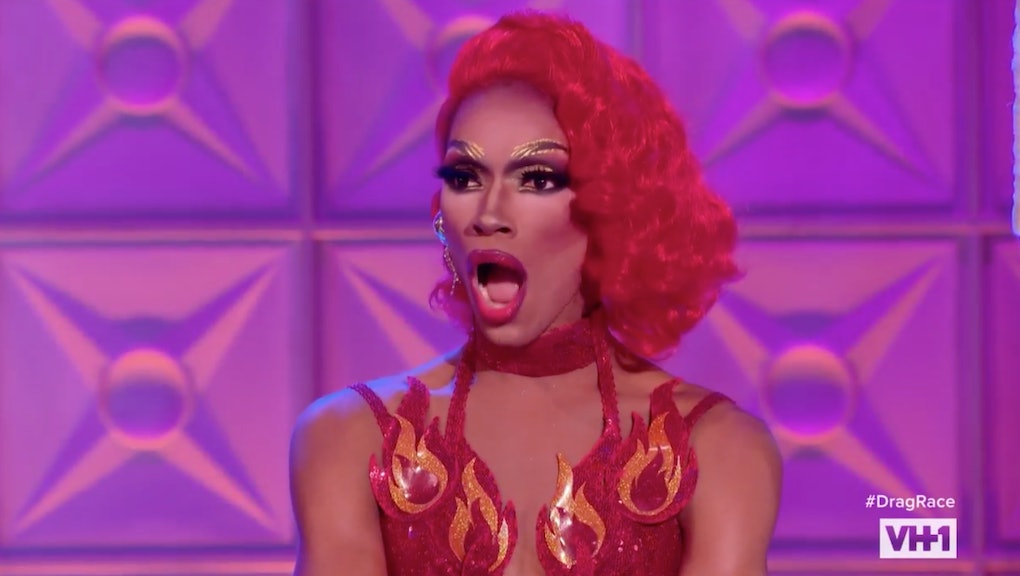 Hello, my regal little raisins. Welcome to Fundamental Reading, the weekly column where we chat about RuPaul’s Drag Race.

The Vixen came into the workroom on day one with her fists up, declaring she was ready for a fight — and by the end of episode two, she made good on that promise, throwing punches every which way.

Her first targets were Miz Cracker and Aquaria, the two skinny white boys from New York who, according to the prevailing narrative, get compared to each other all the time for sometimes having similar looks. Apparently, Aquaria helped teach Miz Cracker some makeup skills here and there, which seemed to fuel some resentment between the two in episode one, when they both emerged on the runway sporting similar, sad-clown eyebrows.

Last week, in the first Untucked of the season, The Vixen stoked that drama even more. While Cracker was onstage receiving well-deserved praise from the judges, she and the others encouraged Aquaria to dish more. (Aquaria’s primary piece of evidence that Cracker has a habit of aping her style is a bit flimsy, per some receipts dredged up on Reddit. Aquaria said that back in New York, Cracker debuted a similar look to hers just a few weeks apart. They’re both yellow and have a chest cutout. That’s basically it.)

At the beginning of episode two, it took not even a full five minutes for the drama to blow up even more, since Aquaria and Cracker were in the same room again. With her wits about her, it seemed like Aquaria tried to soften her wording about their feud, so as not to jeopardize her relationship with Cracker — but Vixen was not letting the situation die down.

“Someone brought up the fact that Cracker’s and my face looked very similar today,” Aquaria said. “[We] may have had some situations like that in the past. It doesn’t bother me, it’s not like —”

In a quote that’s sure to go down in Drag Race herstory, The Vixen shouted, “No, too vague,” laying the feud out in plain English, without all the niceties getting in the way.

I can see where Aquaria is coming from: Sometimes we say shady things about our friends behind their backs, things that we wouldn’t dream of saying to their faces because we value those relationships more than having a fight about whatever’s bothering us. But it’s also true that it’s sometimes better to get these things out in the open so everyone can move on — and The Vixen is this season’s catalyst for making that happen.

She was messy and maybe a little too inconsiderate of everyone’s feelings along the way, but it got the job done. Miz Cracker told Aquaria she would never steal looks from her on purpose, and the situation seemed to be somewhat resolved. But Cracker had some shadier things to say in her face-to-cam.

“I’ve been accused on national television of stealing looks from Aquaria,” Cracker said. “But I just did a look I know for a fact she’s never done. It’s called ‘being on top.’”

If you listen closely, you can actually hear Alyssa Edwards pausing a tap lesson for 10-year-olds to bestow us with one of her trademark tongue pops.

With that out of the way — for now, at least — we moved on to the mini-challenge of the week, a hokey, farm-themed dance-off. The Vixen must gain literal life-force from sparking drama, like a Dementor who feeds on piping hot tea, because she turned it out and shared a win with Asia O’Hara.

In perhaps the most baffling segue of all time, Ru used the homophonic relationship between “farm” and “pharm” to introduce the week’s main challenge: PharmaRusical, a pharmaceutical-themed musical number? Sure, it’s season 10, ideas are running thin — I get it.

Since The Vixen and Asia won the mini-challenge, they each became team captains. Ru gave them to power to select who they wanted to be on their teams one-by-one, surely reawakening some long-dormant high school P.E. trauma along the way. Later in the episode, The Vixen said she was considering having both Aquaria and Miz Cracker on her team for maniacal funsies, but Asia grabbed Aquaria first. Eventually, The Vixen ended up with Monét X Change, Miz Cracker, Blair St. Clair, Mayhem and Kameron Michaels. In addition to Aquaria, Asia got Kalorie Karbdashian, Eureka, Yuhua Hamasaki, Dusty Ray Bottoms and Monique Heart.

If you were hoping PharmaRusical was going to deliver some biting political commentary on America’s opiod epidemic, I’m sorry to disappoint. It was a hodgepodge of songs about pills that make your butt big (Badonkadonx), a cream that turns you into an angry millennial (Trollvada), pills that suppress your gag reflex (Swallowease) and a pill that keeps your penis flaccid around hot guys (Flaccida).

In the end, The Vixen’s team was far stronger — mostly because they actually had the lyrics to their songs memorized, unlike Asia’s team — and ended up winning. In fact, The Vixen continued to cast her long shadow over the whole episode when Ru deemed her the winner of the challenge overall.

Before we get to the final lip sync, here’s a quick recap of how everyone did in the “Very Best Drag” runway in the order they appeared.

Asia came down the runway in a sparkly leotard draped in neon pink fabric. A lot of the girls sported bodysuits this week, but Asia’s long train helped amp up the glam factor.

Onto the second bodysuit of the night. Michelle, in particular, was quite hard on this look, but I think it’s fun. Is it Yuhua’s very best? No. But I think she’s playing with a lot of interesting textures with the fishnet tights, puffy coat and stoned bodice.

This is the kind of look I’d hoped Dusty would’ve worn for her entrance in the workroom. Unlike that look, this was fully unified from head to toe. I personally love Dusty’s trademark dotted makeup, but last week, judge Michelle Visage asked him to go without them this week, which Michelle appreciated.

The third bodysuit of the night came courtesy of Monique, who was serving face from head to toe — quite literally. To her credit, Monique’s bodysuit was absurdly campy and included a reveal. When she got to the end of the runway, she tore off the outer layer of her outfit, revealing a leotard with a mouth on her stomach and hands covering her breasts, helping the giant foam eyeballs atop her head make a little more sense.

Onto our fourth bodysuit: Kalorie’s jeweled, nightclub-style jumpsuit looked fabulous on her, but it simply was not elevated enough to compete with the other girls. This look, along with her “forgettable” performance in PharmaRusical, landed her in the bottom two.

Eureka gave us our fifth bodysuit, something I imagine a NASCAR driver from Venus might wear to a fancy space gala. The main feature of this look was the mermaid sequins that changed color from navy to fuchsia as she dragged her hands across her body.

Unfortunately, all of the other bodysuits on the runway drowned her out, and the fact that she majorly whiffed on memorizing her lyrics during PharmaRusical landed her in the bottom alongside Kalorie.

Aquaria continues to deliver inventive, fashion-forward looks. This week, she looked like Maleficent’s bisexual niece, sporting a see-through dress with a plunging neckline that exposed her bare, unpadded chest.

The Vixen came down the runway in a flame-adorned cocktail dress, looking more like a superhero than a drag queen — maybe Princess Disastah’s feisty younger sister? — but it worked.

Miz Cracker’s look this week was bamboozling, but delightful. Her bodice appeared to be made of metallic sneakers, with criss-crossed laces traveling all the way up her torso, and her perfectly rectangular hair made it look like she was smuggling a television out of Target. It was absurd and alien, but I dug it.

This is what I imagine when I think of “very best drag.” Mayhem served a glamorous, gorgeous, classic pageant look in a metallic, floor-length gown and knocked it out of the park.

Blair’s fringy, beaded skirt combined with her wavy, blonde wig evoked major old Hollywood vibes. Her performance in the PharmaRusical was a bit underwhelming, but this stunner of a look redeemed her.

Here we have yet another hyper-feminine look from miss Kameron, but this one had a heavy touch of the fantastical, too. Much of her face was covered in a deep, pink makeup, almost as though she were some kind of plant creature with bright pink flowers sprouting out of her head.

If you were thinking it was a while since we last saw a bodysuit, you were right, but never fear: Monét finished the runway off with our sixth bodysuit. To be fair, she was stunning: The bodysuit looked heavy, glamorous and expensive.

The final lip sync between Kalorie and Eureka was set to The Emotions’ “Best of My Love.” Unlike episode one, Kalorie didn’t have any jaw-dropping stunts this week to redeem her lackluster performance in the main challenge. Eureka also opted for simplicity in her lip sync, but her confidence, exactness and sheer power edged her out over Kalorie. Plus, anytime a queen struts to the back of the stage at the beginning of a song, you know you’re about to witness something good.

Ultimately, Ru decided it was Kalorie wasn’t satisfying her craving and sent her home. Mic will have exit interviews every week with the eliminated queen. Stay tuned for our upcoming chat with Kalorie.